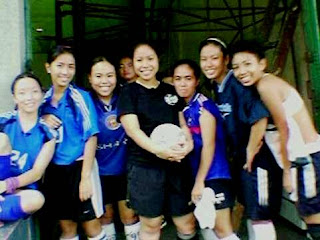 Every muscle part of me is in agony. This is what I get for doing a lousy warm up before our futsal tournament yesterday. Adequate stretching is a prime rule before engaging into any physical activity but after playing football for ten years, the enthusiasm for these sort of rules is wearing out and I just wanted to play for fun.

The tournament was hosted by the Sunken Garden United football club - a UP Diliman based team. It consisted of six games of futsal. Futsal is the term for the kind of footbal you play inside a warm well-lighted gym or occassionally in the streets. The floor is cement or wood and we use a different kind of shoe – the one with rubber soles. I got mine from Mizuno. Unlike field soccer, we don’t get all muddy and grass-stained after the game but we play it just as fiercely.

Our team lost but being able to exercise by playing football felt really great. The team had good chemistry even if it was the first time we played together. We were a merge from different football teams. There were two college girls from Ateneo, one is from UP Manila, one girl is trying out for RP team and two of us from San Beda Alabang. We met because we all went to Bene for high school, except for these two other girls – Van and Myk, who we met through Doreen. Doreen is my younger sister’s batchmate. I was the oldest one in the team.

Though I was happy with being able to play football, my game felt off. My mind wasn’t entirely on the game. I was thinking of something else. I didn’t play as well as I was expecting and I felt slightly embarrassed about it. Anyway, there will be a next time. It’s just funny that I don’t really care about it that much. A few years earlier, I would have given my all and I would have been heartbroken if I wasn’t able to play well. This is like having being in a relationship wherein the romance is wearing off…hehehe!
Hopefully, I will bounce back after a few months. I think I'm a bit burn out from all the things in my life. I'm trying to get a bit of rest.
Football