Mt. Pinatubo - With my Bare Foot

Posted by Jovial Wanderer on October 19, 2007
Our group had already been walking for about an hour. It was tremendously hot and although the trail was pretty much even - similar to walking on a beach with some gravel, everyone, with the exception of some tenured climbers, were just trying to make it one step at a time.  The trail was also getting boring since there isn’t much sight to see except mounds of sand. Mind you, I have high tolerance for heat, but the weight on my back was getting the best of me and I wasn’t wearing a cap to protect myself from the sun (another lesson learned).
Our group decided to rest on this area with flowing steamy water and slight stench of sulphur. I was pretty happy to see something else aside from gray sand so I gamely dipped my whole shoe into the water. I waded my foot in the water for a few minutes then it was time to go. After a few minutes of resuming the trek, I felt the undersole of my shoe  separating from the heel. Then it finally came off after a few steps! I didn’t know what to do, I didn’t have any adhesive or rope so I decided to walk with it for a couple more steps but it was making it harder for me  so I decided to wear just the socks. I didn’t want to burden anyone so I didn’t complain. Besides, nobody seemed to notice I was walking without a shoe. After several more minutes, I decided to take off my socks because the sand was scraping my feet. I had to endure stones, sand and the heat the whole way up the summit. I was pretty much walking by myself the whole way through since I couldn’t find anyone who walks the same pace as I do. I’m not too quick but I’m not that slow either.
When we finally reached the crater, everyone was exploring the place. I was just grateful to have made it without breaking down. I slumped in a mound of soil in exhaustion. When the tent was put up, I gratefully crawled my way into it. Most of my friends went swimming after a few minutes while I couldn’t muster any strength to do anything else. I got a little energized after resting, then when it was time to eat dinner, the wind got stronger blowing sand over our food. Since we were all hungry, we didn’t mind the food which got sand bits on it. Like after a few bites, you need to swallow it right away so the sand doesn’t get in between your teeth. This is what I love about mountain climbing, any food in your mouth tastes delicious.
We turned in early after that since mostly everyone was tired. I don’t really bring jackets on climb since I thought layering was enough. I soon regretted my decision not to bring any warm clothing. During the middle of the night, I woke up shivering so bad. It was incredibly windy and cold. It felt like someone was beating our tent. Since I didn’t have any clothes left, I decided to ignore the shivering but it was very difficult to sleep. After several minutes, I finally dozed off. I woke up early the next morning feeling very sticky. I remembered I wasn’t able to brush my teeth and take a bath the previous night. My hardcore football coach who slept in a hammock outside our tent was already up.
Most of my friends were still sleeping. I even saw that one tent had collapsed during the night and it looked like a giant blanket. My eyes surveyed the area. It was my first time to appreciate the summit. The crater is so blue. The weather was still a bit windy and cold. I immediately felt the urge to swim. I went down this small ravine for a dip in the crater. Coach Teng was there already washing some cookset. After psyching myself that it's safe, I finally decided to swim. The shallow area was not enough for me and coach who was dumping the water with rice and excess food from the pots he was washing. I had to swim away from him because the corned beef grease was clinging to me. Scared as I was, the water was worth it. It was cold but it felt clean. It smelled a little like sulphur but stress-relieving. I stayed in the crater for not more than 30 minutes. There wasn’t much to do but wallow in the deep water. Plus, I was feeling a little freaked out. I felt a bit paranoid that the water might start boiling minus a naked guy next to me like what happened in the movie – Volcano.
We went home around noon. Again, it was ultra hot but screw the heat, my dilemma was that I now had to trek my way down barefooted. I had slippers but I didn’t want to break it. I was going to wear it once we reach the jumpoff. So again, after 3 and a half hours, I walked barefoot. I got home late in the afternoon with weak knees, dead skin cells all over my body and a triumphant, stronger spirit. This experience was one I would treasure for the rest of my life, plus it made me a better mountaineer. I also learned that packing light does not involve forgetting the essentials such as cap, jacket, rope and adhesive. Oh and another thing - don't be stupid to dip your shoe in water that has sulfur in it. 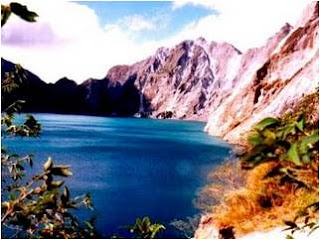 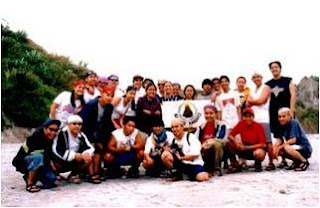 Here's another blog where you can get information on Mt. Pinatubo.
Mountaineering Mt. Pinatubo Zambales