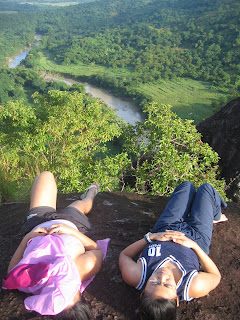 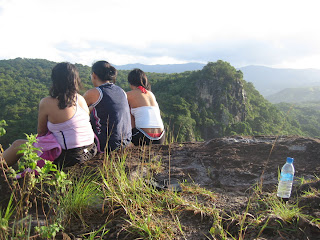 I  enjoyed Mt. Manalmon because in less than 24 hours, we were able to :

Cross on cable wires suspended 20 feet over the Madlum river which according to locals claims at least one life annually. The cable wires was around 75 meters long. We had to cross this or we walk 1 KM to the Madlum caves. We decided to take the road less traveled and do the cable crossing. Geez, that road was less than an inch thick.

Do some spelunking on Madlum cave – a historical site where a shrine of San Miguel was retrieved. The cave also served as a hideout for Japanese soldiers during WWII. According to our guide, this is also where 9 Filipino soldiers successfully assaulted around 300 Japanese soldiers.

Bouldering – Wohoo! I had a great time doing this. Outside the Madlum cave overlooking the river, we spotted some boulders and climbed on it.

Ride a bamboo raft and clung for dear life. We needed to cross Madlum River to get to the jump-off of Mt. Manalmon and we had two options – cross using a raft or two - cross the river through the cable wires again. Hmm..not in a hurry to do that again. Unfortunately, the bamboo raft was done hastily and was not stable enough to support 7 of us plus our guide and our heavy backpacks. None of us got to relax during the ride because we had to continually shift positions to keep the raft steady. We were all in a tensed mode because slight movements caused the raft to sink in one portion.

Carabao Dipping in Madlum river. Yes Carabao dipping not swimming because the current was a bit strong so me and my friends just immersed at the shallow portion near the rocks. None of us are strong swimmers.

Get a feel of the Military balikatan exercises since it was the same trail they used for training.

Last but not the least – Weird Experience : (I have at least one for every travel) Me and another friend – Laurence got interrogated by a soldier who was holding an armalite. He didn’t point it to us directly but it was positioned in a threatening manner. We had just finished registering at the Barangay tanod wife’s eatery and this soldier called on us. As we walked towards him, he suddenly took out his armalite and asked us “Ano bang pakay nyo sa bundok na yan?” We told him, we just wanted to climb it and he said “Yun lang? Aakyat lang kayo tapos babalik uli?” We said yes. Then he accused us of being activists. Hello!!! I know my legs are muscular but I wondered how he came up with that idea… our clothes were pretty normal and none of us wore anything that would suggest our involvement in any leftist group…Anyway, after laughing at his accusation, he let us go. If he only knew, I don’t get intimidated with big guns..I happen to find it sahhhxyyy! hehehe

Updated Mt. Manalmon IT - Based from Nov 2007 Climb

November 17, 2007 Saturday--------------------
6:30 AM Assembly (Baliwag Bus station, Cubao)7:30 AM ETD – Baliwag Terminal9:30 AM ETA - Brgy. Kamias, San Miguel, Bulacan TIP: Ask bus conductor to drop you off at the Tricycle Terminal in Brgy. Kamias. This is near the highway where you will get off.
9:35 AM ETD – Brgy. Kamias TIP: Along the way – you can ask the tricycle driver to make a stopover at carinderias where you can buy food and additional supplies.
9:35-9:55AM – Buy Supplies and food
10:40 AM – ETA : Madlum River
10:40 AM-11:00 AM : Ask the locals for Mang Carding. He lives in a house across the Madlum River which you need to cross either by walking through cable wires suspended 20 feet over the river or by borrowing a raft from the locals. Luckily, Mang Carding found our group by the river but we had to cross the cable wires anyway to get us to the Madlum Cave. A less adventurous option is to trek your way to the Madlum cave which is around 1KM from Madlum river (I’m not sure if this is still open though). Mang Carding was also nice enough to carry our packs across the river since we could barely keep our bodies stable through the wires.

Tricycle from Brgy. Kamias to Madlum River : 200 pesos (for 3 persons); 60 each for 4 people); you need to make arrangements with your tricyle driver to have you picked up on your way back since tricycles seemed to be rare in Brgy. Madlum.

TRAIL: We climbed November 2007 and the trail was very slippery. It’s 70% uphill. Mang Carling, our guide said that the old trail was close already and the one we used was the trail for the military Balikatan exercises. Whoa! No wonder some parts of the trail seemed like nobody has stepped on it in years.

Prepare to get your shoes wet because at some point, you will need to cross a river, which won’t take 10 minutes but better bring sandals too. Most of us wore shoes which was useful in several instances where we needed to cling on branches, boulders and vines to support our weight going down.

GEAR : Make sure your tent is waterproof especially if you’re climbing during the rainy months. Two of my friends bought the 2-person Coleman Weatherlite tent and it got through 5 hours of heavy rain which we all successfully went through. It’s light, cheaper than your usual tents (around 2,600 pesos – Paris correct ba ako?) and very spacious. The 2-person capacity is based on American size so it can fit as much as four people if they’re petite. You can also get lucky and buy a cheap tent like mine which is less than 2,000 pesos. Just check if the flooring and walls is waterproof and if the material can hold the wind. I was advised by my friend to avoid using poles made up of fiberglass because they can shatter and is hard to repair – you wouldn’t want to deal with that when you’re in the middle of nowhere.

WATER SOURCE: The nearest water source from the campsite is the river - about an hour away, if I remember correctly.