SAT : Summit  Mt.Manabu (Sto Tomas, Batangas), go down and climb Mt. Gulugod Baboy (Mabini, Batangas) and camp there.
SUN : Descent G. Baboy – Check in at Phil Pan Diving Resort for some snorkeling and be back in Manila by 5:00 PM. It seemed simple enough at that time.


But what actually happened was:
February 16, 2008
6:00 AM – Saturday
Our bus left Manila to our destination - San Pedro in Sto. Tomas, Batangas. Bus fare was less than 95 pesos. The ride took about two hours.

8:00 AM
We had breakfast in an eatery near the tricycle station where we had to take a trike to Barangay Sulok.

8:21 AM
We boarded a trike to Brgy. Sulok. When we got there, we paid 10 pesos for the registration in the barangay hall. They also offered to guide us but we declined. They gave us their cellphone number though just in case we get lost so we can call for help. We again boarded the tricycle to take us to the jumpoff.

8:57 AM – Start of Trek. Sky was very cloudy with a threat of rain. We start off excitedly.
After a few minutes…trail stopped.


After several minutes of going in circles, we spotted a kid who showed us the right way. We mistakenly took a wrong turn which almost lead us to another mountain. Way to go Christine!

After one hour…we ran into two other kids on their way to their hut and accompanied us on our trek, generously offering free guideship. 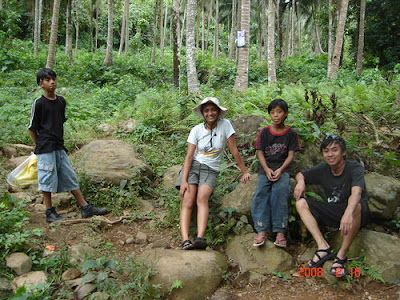 We spotted a shed with a man selling buko juice freshly picked from coconut trees around the area. We were only too happy to get a chance to sit down and have our heavy bags off our backs for a few minutes. We excitedly bought buko juice to drink and refresh ourselves. The buko was at 10 pesos per piece. One sip, and we were all smiling. It tasted so fresh and it was even a bit cold because of the weather on the mountain. 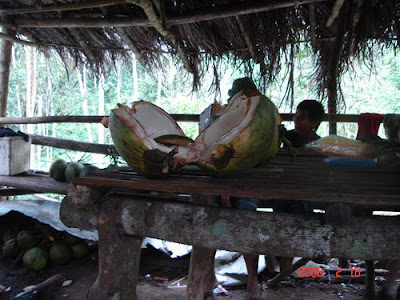 I had a sudden vision of myself drinking buko juice while chilling in the summit. I bought another buko to take with me to the top right before we left. Since it was slightly open, I had to carry it on one free hand. I knew it would be challenging but I didn't care - I'm taking my buko to the summit. 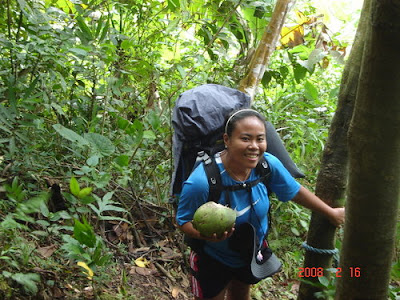 After several more minutes, I was cursing at the buko and Ren and Glee were laughing at my ordeal and calling me the buko queen. It felt extra heavy but I was very determined to take it with me to the top. The two kids who were willing to take us upto Mang Pirying’s hut – another place where we can rest, were even volunteering to carry my precious buko but I refused. I don’t believe in passing my load to other people.
After walking several meters, we finally arrived at Mang Pirying’s hut and we stopped for a few minutes to rest and chat with the mountain’s famous man. His hut has become a popular rest stop for mountaineers scaling Manabu. He even offered kapeng barako. He told us we were less than an hour away from the summit. This got us psyched and again we started our hike with more vigor.
We finally arrived at the campsite which was 5 minutes away from the summit. We looked at the view with awe. Near the summit, you can already see numerous mountains and the nearby barangays below you.

One group was already there and we chatted with them for a few seconds. We searched for a more isolated spot where we can do restroom breaks and changed our clothes. Though the summit was already beckoning us, the call of our hungry bellies were much stronger so we chose to cook our food first in Glee’s brand new cook set and took our lunch. 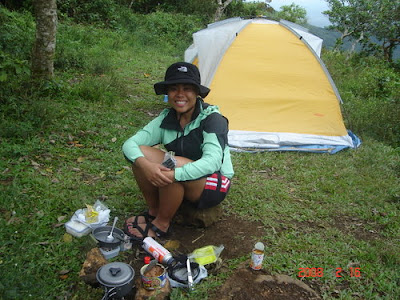 We later regretted that decision. After an hour, fog began to build up in Manabu and when we reached the summit, the only view we can see was the huge white cross filled with vandals of irresponsible people, the ferns and plants and more fog blocking what would have been a great sight. We just made the most out of it by taking pictures of ourselves and some videos.  ﻿ 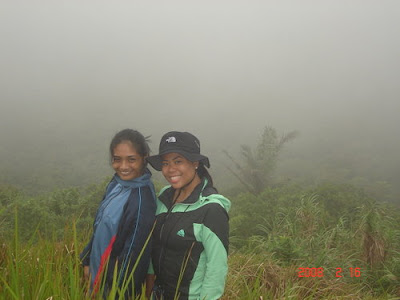 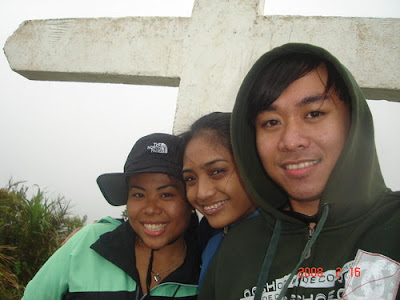 We immediately went down after that and spent a few minutes talking and laughing at our campsite. When we had recharged, we packed our bags and made our way to Mabini, Batangas. When we finally got down the mountain, we already abandoned the idea of climbing another mountain. Instead, we decided to make a campsite and go snorkeling at Phil Pan resort which is near the jump-off to Gulugod Baboy. 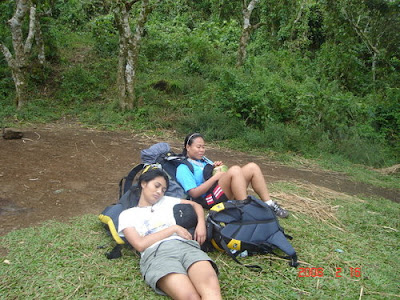 But fate has its way of pushing you to take the road less travelled - after we climbed down Mt. Manabu, we got lost on our way to Mabini, Batangas from Sto. Tomas and we turned up on the shores of Gold Mines Beach resort in Anilao around 10 PM. We couldn’t afford to hire a jeep that would directly take us to Phil Pan so we opted to pitch a tent there because that was how far the jeep could take us.

Since we arrived very late, the resort owner was a bit suspicious at first to let us in. She asked where we’re from and we told her our sob story of getting misdirected in another barangay in Lipa. She was quite nice and empathized with us and she charged us with a minimal camping fee of 100 pesos.

By the time we were able to put up our tents and clean ourselves a bit we were too tired to open the liquor we’ve been carrying for over 10 hours.

We woke up around 7:00 AM, Sunday morning to the sound of our growling stomachs.

When I got out of the tent, I realized that the area we camped was directly in front of the docking area of yachts and several small diving boats. On the left side of the shore was a huge mountain. It was an amazing sight of commercialism and nature working in harmony. Although there were a lot of people and boats in the area, I couldn’t see any garbage in sight. The water was also crystal clear and not brownish which is usually the color of the water in a lot of piers. Glancing at the water, you can see that there are still tons of seaweeds on the ocean floor. There were several kids happily swimming in the water and I was even tempted to take a dip myself. It was just beautiful. I was able to have a chat with the mom of the resort owner and she told me that their community really takes good care of their resources. The public schools in the area also organizes a coastal clean-up annually after the summer. No wonder the place has maintain its purity. 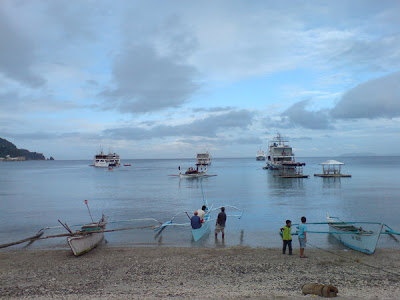 After having our brunch and fixing our stuffs, we headed to our original destination – Phil Pan Diving Resort which is a 45-minute tricycle ride (80 pesos per trike) from Gold Mines. I really wanted to go back in Phil Pan and bring my good friends Glee and Ren so they can witness the colorful fishes under its waters. We arrived there a little after 12 noon.

I have always loved the people in Phil Pan Diving Resort. They always give a warm welcome to mountaineers and would often offer discounts. In our case, entrance was at 60 pesos and the cottages were at 300 pesos but since we were only three, the nice lady (one of their staffs) told us that we can just pay 300 pesos for everything.
We were utterly delighted. Unfortunately though, when we parked our bags in one of the cottages, we were welcomed by a raging sea, cold weather and a little rain. I gulped, the water looked like it wanted to swallow us. There was almost no shore. The waves were banging through the cemented area near our cottage.

But we really wanted to take a swim. Glee and Ren had just bought their own goggles and wanted to test it in the ocean. We decided it can’t be the bad. We saw three 3 brave kids doing somersaults in the water and none of them has drowned yet. 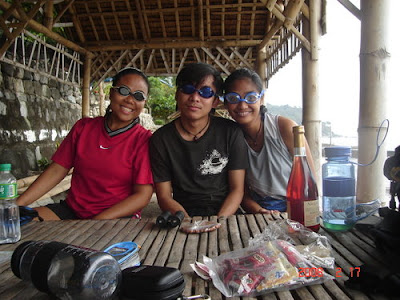 After a few minutes of summoning courage, we finally made it into the ocean. We dived for fishes and we weren’t disappointed. As soon as I dipped my head and searched the water, I immediately saw tons of small colorful fishes in their natural habitat. We even saw a fish that had neon yellow tail and purple scales. Even if my open wound ached severely from the salt water, the view underneath was worth it. Water was a bit cold but we soon grew accustomed to swimming in it. 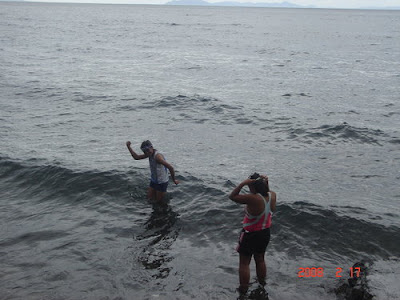 We checked out at 4:00 PM and dined  at Balayan View Restaurant – a two minute-walk from Phil Pan resort. There we feasted on Chicken curry, sinigang na baboy and nilagang manok (variands range from 65-75 pesos; rice at 10 pesos). Through its window you get a good view of the water and several houses in the area. 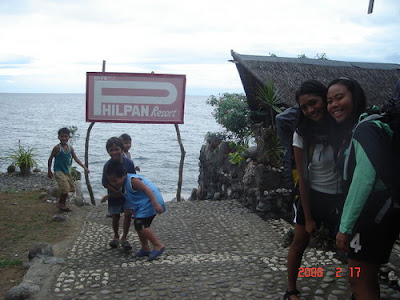 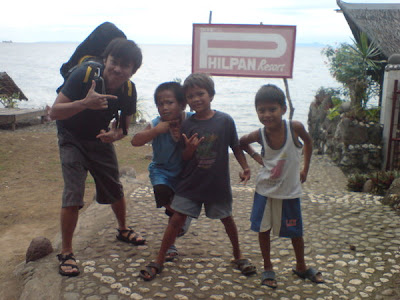 I arrived home 10 PM Sunday night with a headache and a body that craved for sleep but with mental vigor for the coming work week. Once again, I was able to spend my weekend with amazing company and was able to engage in a great adventure! :)