Posted by Jovial Wanderer on June 17, 2008
I was leafing through a Sea Air magazine when I chanced on an article about Baler, a municipality in the province of Aurora. The article and pictures were enough to entice me to pay a visit, a week later - to this place which most people call paradise.
The bus had just made its way out of the Cabanatuan Bus terminal and I fell asleep after a few minutes. It wasn't after an hour or so when I woke up jolting from my seat. It was time for the famous rough ride to Baler where every person looked like they were warming up on the dance floor. At this time the bus is already making its way around Sierra Madre. 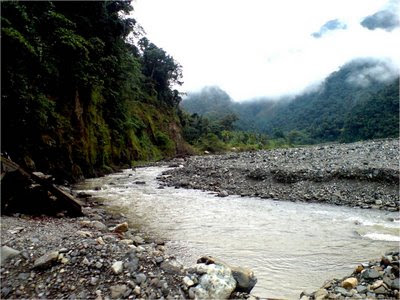 Miles and miles of forest and mountains came into view which was such a refreshing sight - goodbye to buildings! After another hour, the bus headed for a 15-minute stopover in the middle of nowhere. There was a small canteen by the side of the road with great views of mountains everywhere. Here, you can use the restroom for free. They also sold barbequed hotdogs – my favorite for just 20 pesos – cheaper than anywhere else. 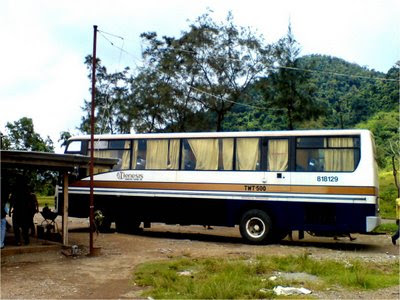 From the old market in Baler, I took another trike ride to Brgy. Sabang to find a resort where I could stay for the night. From Baler to Brgy. Sabang, trike fare was 20 pesos. The trike driver recommended Bay’s Inn but I wanted to see the other resorts in the area.
The whole stretch of Brgy. Sabang is lined up with affordable accommodations. After a few minutes of wandering around in search of an affordable bed, I decided to check in at Bay’s Inn.

I chose a room good for 3 people which only cost 550 pesos a night – all in! It had its own bathroom, 1 double bed, 1 single bed, cable tv, shower, clothes hanger and a huge mirror.
Falling in Love with Bay’s Inn
After two hours of resting and freshing up, I headed to the restaurant. My room was the nearest one to the resto. Hehehe! I can sleepwalk my way to it actually. I was greeted warmly by the staff and when I sat down – wooow – a vast ocean view! The comforting breeze of the ocean surrounded my whole body.
I glanced at the menu and my heart soared. The prices were all affordable. It was cheaper than your usual resort food. You can just allot 100 pesos per meal and get a satisfying meal. I ordered nachos and sizzling chicken barbeque and banana shake with chocolate syrup. I didn’t even have to wait long for the orders to arrive. After a few minutes, my shake was served. A generous glass of banana shake topped with chocolate syrup and a simple cute white straw. I drank it and it was heavenly.

After a few more minutes, my plate of nachos arrived. It was a heaping portion of nachos good for two people! Whoa! Then my sizzling chicken arrived – rice was huge – chicken was minute but it was fine because I was a bit full from the nachos.
I was so full after that meal. It’s so rare that I have leftover on my plate but I really couldn’t consume everything.  I love the way the food is served. Everything is prepared nicely plus the staff are really nice. Every meal in Bay Inn is a delightful sight. I would definitely come back here just for the food. 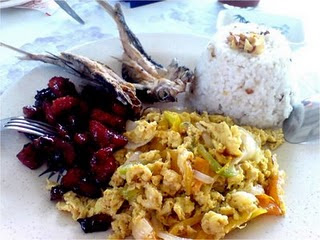 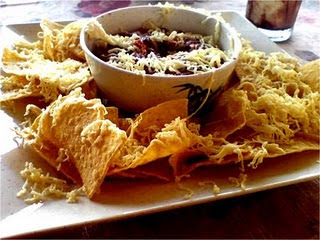 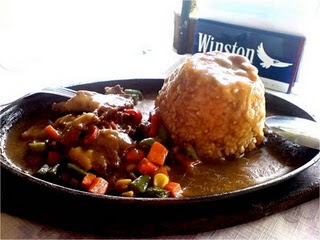 Oh here’s my room. I love it. For a backpacker, this is first-class already: 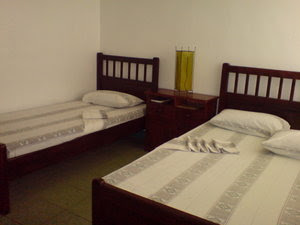 The best thing about traveling alone is that I can have a whole bed just for my stuffs. 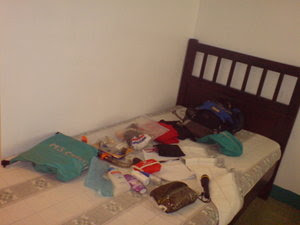 The thing I love the most about this room is during the night, you can hear the waves crashing on the shore. It was such a great lullaby.
Swimming at Sabang Beach
This area is known as a surfer’s paradise. There’s even a surfing shop a few meters from the beach which sells souvenirs, surfer’s wax, key chains, sunblock, etc. You can also hire someone to teach you about surfing for 350 pesos an hour including the board rental. Snorkeling is such an alien term here. I’m more into swimming and am pretty clueless about surfing and when I asked around about a good snorkeling spot, people would often give me a confused look. I swam at about 5:00 pm. Well,  I tried swimming but I couldn’t do any freestyle without being wiped out by the waves. They come in every few seconds and I just kept on jumping with the waves which was also fun. I suddenly wished I wasn’t alone. I stayed in the water for around two hours just to make myself hungry. Hehehe! Believe it or not – I have already decided on what I would be eating for the next day.
Day 2 - A Visit to Digisit
Digisit beach is one of the 5 good snorkeling spots in Baler based from what I’ve read from the Aurora website.
To Get There: Coming from Bay’s Inn in Barangay Sabang
Hire a tricycle to take you to a 30 minute ride to Digisit. One way fee – is 250 pesos as of June 2008. It’s 500 pesos if you hire the trike for a roundtrip and the driver will stay with you for a full day. Since I felt that that money could have just been spent more wisely on food, I decided to just pay for a one way ride and walk and hitch on my way back to the resort. I have been told that the area is safe and that a lot of foreigners do a trek around Digisit beach.
The tricycle driver was really helpful and acted like a tour guide. He showed me where the nice spots were and shared some stories about the place.
At the end of the 30 minute ride – he brought me to an area posted with this sign. Okayyy... 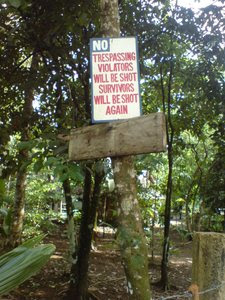 I continued walking until I reached Digisit beach. This looks like a private jacuzzi minus the steam - it has corals and colorful fishes 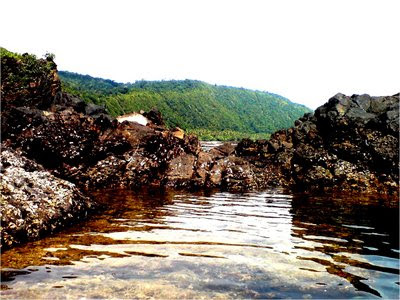 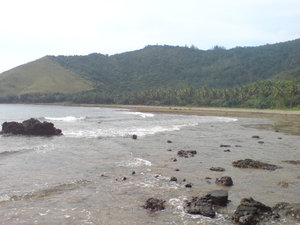 Did it looked like I was alone in here? Yeah, pretty much, I saw less than 10 people in the area and they were all locals. 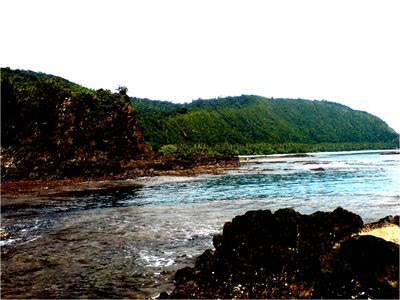 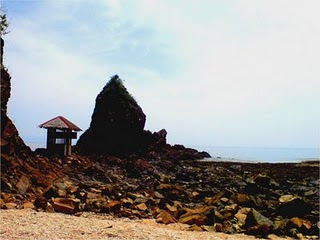 I savored the rest of my stay doing nothing and by6:34 PM, I was already on board a Five Star bus. My body was aching in all places due to the long travel but my mind was invigorated. I was going to face the work week with a fresh mind.
Provincial Website :
Weather reports :
BBC Weather
Transportation :
Genesis Bus Pasay Terminal along EDSA – offers direct trips to Baler – 414 pesos – one way - 7-8 hours one way from Pasay to Baler
Contact Info : +63(02) 8533115
Baliwag Transit – 33 EDSA Cubao; bus trip from Manila to Cabanatuan Contact Info : + 63 2 912 3343, + 63 2 912 3349, + 63 2 912 3361
ES Transport - MNL To Cabanatuan (3 1/2 hours bus ride): I took the 5:20 AM Saturday trip to Cabanatuan – costs 185 pesos ; If you’re in a hurry, it will save you time if you ride the direct trip to Baler via Genesis Bus
Where to Stay in Baler:
There are lots of lodging along Sabang beach (There's Amco, Bahia De Baler, and a lot more) – feel free to choose from several resorts in the area. For less than 500 pesos, you can already get a decent accommodation. Since I travelled past the peak season, I didn’t bother making a reservation. But if it's surfing season, you gotta book ahead.
My Pick :
Bay’s Inn (beach front) Resort : a 20 peso - trike ride from Baler town proper
Website :


Food : Whatever your budget is – you will never go hungry here, there are several eateries along Sabang beach, even fishball vendors. If you opt to eat at Bay’s Inn, be prepared to spend 100 pesos (even less if you’ll just go for the sandwiches or pancit) for a meal – I loved the fish fillet sandwich. They also serve nachos, pasta, pizza. I love Bay’s Inn resto!
Surfing at Sabang beach -  rates are at 350 pesos/hour with board (just go to the surfer’s shack – it’s along the series of huts before you approach Bay’s Inn coming from the Baler town proper. You can also buy sunblock, shirts, souveneirs, underwater camera, wax for your boards, etc
Hope you'll enjoy Baler as much as I did!
Aurora Backpacking Solo Travel