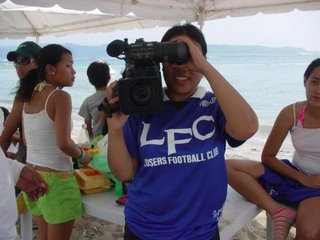 Borrowed this thing from a Solar Sports cameraman, it weighs a ton! 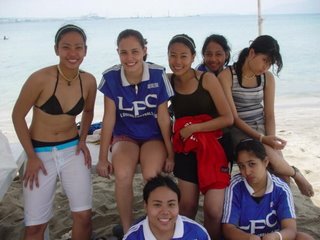 With my teammates in one of our breaks
Our coach snores like there's no tomorrow. If my teammates and I weren't running low on a budget, we would have booked him on another floor or better yet, another building! Too bad we needed his share on paying for the hotel. We charged him extra because he snores! We were fortunate that my friend who was one of the organizers alotted one room (discounted, of course) for us in the Grand Seasons, Legenda. Our room was okay. It had a cable tv and a shower (hot and cold). There wasn't much view though, but it didn't really matter because we were outside most of the time. We spent one whole day in the beach playing football against four other teams. Again, we weren't able to make it to the finals but thank God we had minimal casualties. Most of us had burned feet. One teammate scorched her foot so badly because of the super hot sand that she had to stop playing after two games. Last year was worse because one teammate couldn't walk normally for months. She got injured while playing and I tried to register first aid but it got worse instead. :( She won MBP though, as in Most Battered Player award. She hopped on one foot to receive her award.
Football