Trying Out Paintball in Global Gutz

Posted by Jovial Wanderer on September 22, 2007 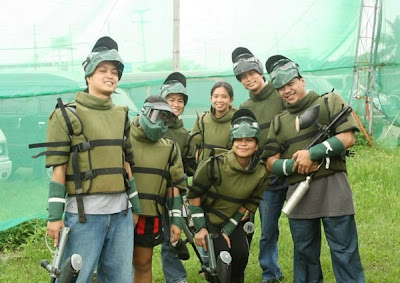 My Team - me in shorts 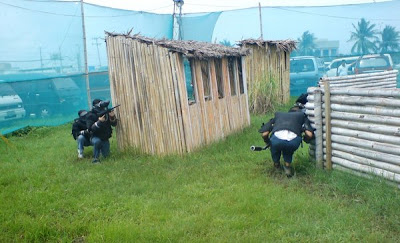 
I just got home hours ago from a teambuilding activity in Pasay city. Me and my officemates including our managers played paintball against each other. We were divided into two teams and we battled hard and rough under the hot sun. We started around 9am and finished at about 11am. It was my first time to play paintball and was a bit apprehensive about it at first. Believe it or not, it’s not about getting hurt that freaks me out, but the thought of causing pain to other people. You see, to play paintball, you will be using “guns” loaded with paintball pellets. It actually looks like a mini armalite. It uses air pressure to shoot out the pellets so it’s very painful when it hits you on the flesh. I don’t really feel like hurting any of them since I’m friends with most of them.

I wore shorts for the activity which normally isn’t allowed but they had no choice but to let me play since I’m there already and me and my team organized the whole thing. We were able to play more than 3 rounds, my team winning most of the time I’m proud to say.

The finals - it was me against two other guys. It was an elimination type (in Filipino - matira, matibay) and the two guys ganged up on me which led to my early exit from the finals. Hehehe..oh well... at least I lasted that long.

Battle Scars
I got hit on the flesh 4 times – once near my elbow, my right foot,  right leg and on my neck. Everything is pretty swollen right now. I look like I have boils. Two of those actually bled. The one near my elbow got hit at close range (two feet away) and it bled instantly. Part of my skin even got ripped off so now I have two wounds there. I don’t really mind. Paintball was really fun and despite all my injuries (trust me - it's me, not the sport, hehe), I still consider it as a safe activity.  They made us wear helmets, vests covering the upper body both front and back and pads on the arms. They provided a lot of referees to control the game. It was well-supervised.  I’m the only person who bled but there were four of us with major hits. Most of my colleagues got hit either on the vest or at the gun. When you get hit by a paintball bullet, it feels like your skin getting ripped off. It hurts for hours. Mine’s been hurting for seven hours already but it’s really worth the pain! It practices your competitiveness, instinct, decision-making skills, leadership, teamwork, communication, etc. It’s a must for highly competitive companies and sports teams. I love my account manager even more for thinking of this activity. She’s a paintball fanatic. After the game, we headed over to the Marina, a seafood resto fronting Boom na Boom. Food, service and ambiance were excellent so we had an even better time eating. 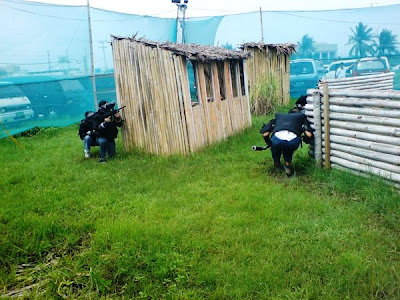 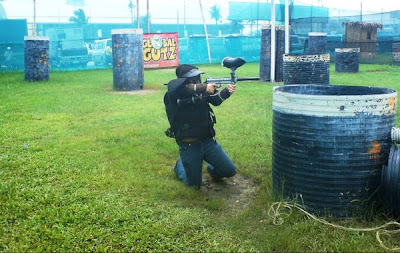 There were three of us who organized the paintball activity and I found it very easy to arrange since you only have to reserve the place, organize the teams and convince everyone to come.

Here are some information on Global Gutz:

It’s also highly advisable to bring your own drinking water because all that action will make you thirsty. They have available restrooms for you to wash off the paint.

If you need a venue to eat after the game, there’s Marina and Pier One which is about 100 meters away from Global Gutz. Marina has great customer service, clean rest rooms, great food. I love it. Prices are a bit higher than your usual humble restaurant. For a group of around 23, we paid a little less than 10,000 pesos including EVAT and service charge.
Paintball Pasay