Posted by Jovial Wanderer on October 30, 2009
Banking on sheer gut and years of scaling mountains, me and my good friend Jules decided to join the 23rd Climbathon in Mt. Kinabalu in Kota Kinabalu, Malaysian Borneo. It’s a sport that combines running and hiking under a specific amount of time and is dubbed as the World's Toughest Mountain Race.  We finalized our plans 12 days before the event. That’s pretty crazy :P!

Since we were there to mainly have fun, we figured that we'd do our best and not get ourselves killed. Mt. Kinabalu is higher than Mt. Apo and usually requires  1.5 days to reach the summit and about half a day to descend. For the women's division, we were only given 3.5 hours to get to the summit starting from the Timpohon gate and 2 hours to go down. That's 21KM of steep terrain. Pretty crazy, especially if you're not much of a runner. I definitely wasn't. We only joined because the reg fee for the race was a fraction of what we need to pay for a hiking package. We paid less than 2,000 Pesos for the reg fee while hiking packages can go as high as 14,000 Pesos/head.   :P

Our country sent its own contingent from the Philippine Skyrunning Association who we met on the day of the briefing. We didn’t intend on showing our faces to them because we knew there was this huge possibility of embarrassing ourselves given our lack of training. Incidentally, we sat next to Sir Lito, a member of the press who was doing an article on the Philippine team. He overheard me and Jules conversing in Tagalog and before we realized what happened, the Philippine team started chatting with us.  They were surprised that there were other Filipinos apart from the contingent who had registered.

After the briefing, the team invited us to join their photo session. We were deeply touched by their humility and kindness especially Nina Dacanay, PSA president who insisted we joined them. (Thanks Nina!) 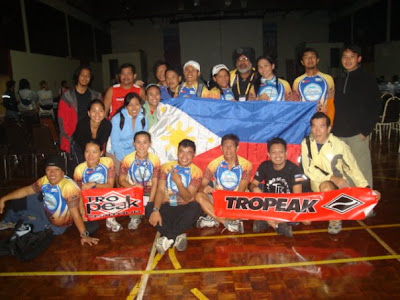 Us with the Official Philippine Delegates


On the day of the race, me and Jules accomplished personal records. Though we failed to reach the summit, we had achieved the highest ascent in our hobby of climbing. Jules reached the 4.5KM marker which is around 3000 MASL and I reached Laban Rata located at marker 6KM – 3,272.7 MASL which is higher than Mt. Apo. That’s only 2.72 KM away from the summit. I didn’t make it to the cut-off time t so I was asked to go down. Not bad huh? The air was really thin going up and had to keep gasping for air. It’s like never having enough air to breathe. The temperature was also very cold , like  Batad in its coldest month.

The race started at 7:00AM and I got to the finish line at 3:00PM, two hours after race was officially over. I took my sweet time going down the mountain since I knew it would take some time before I return. I  chatted with the race marshalls in some of the stations, ate wild berries, had my picture taken with my new found friend and sang along the trail.

After the race, we had some body pains but nothing that good old Katinco can’t fix. The tough part was going back to our lodge which was 1.8KM away from the entrance of the Kinabalu Park. We couldn’t get lodges near the park as they were already booked for the race. Our lodge is situated up in the mountains with an average temperature of 12-23 C. We had to ascend about 4 hills just to get there and we were the only people in that lodge during our stay. The staff – lived in a hut down a hill so we had an entire lodge to ourselves.

The 2009 Kinabalu Climbathon was the deciding leg for the Sky Runner World Series. So not only were we novices at trail running, we also encountered the best mountain runners in the world, but hey we survived it with huge smiles so it's all good! :)

For results of the climbathon, you may check out this link.
Climbathon Malaysia Mt. Kinabalu Trail Running