Odd Venture : My Experience as a Race Marshall

Posted by Jovial Wanderer on November 09, 2009
Saturday evening, I got an ambiguous text message from a friend of mine asking me for a callback regarding a marathon.

Curious, I decided to give him a call but the line was unclear. He called back a few minutes later. He said something about a run, seconds into the conversation later, I landed a new part-time job as race marshall for the Philippine International Marathon. It’s a benefit run for the Pasig river. I will be handing out the race markers – red strings for the 2.5KM mark for the 5KM run.

The run was held yesterday in Manila and what a fun experience it was! I encountered lots of types of runners. Most are polite – those who said thank you after I gave them the string while some are just too tired to care, some are overeager – people who hoard over the race marshalls for the string. Some are newbies, those who have no idea what a race marker is or where to put it. Some are just there to make pa-cute. Being a football player was an advantage. I'm used to defending my turf and did not feel intimidated by the crowd that charged at me. There were other marshalls too (my newly met friends) but the thing is – some people just go were the crowd is. Crazy!

With this experience, I learned some things when joining a run:
1. Markers are given to ensure that you have completed the whole course because some people just cheat! How embarrassing, why join a sport that measures how far yourself can go when you cheat on yourself? That’s just stupid.
2. If a string will be handed out as a race marker, extend your hand, as long as you can. It makes it easier for the race marshall to spot who to give first.
3. Make eye contact with the race marshall so they can see you coming.
4. Don’t forget to say thank you to the race marshall – they work hard too you know and they deserve the appreciation J

Thanks to my friend Manny for the pictures. :) 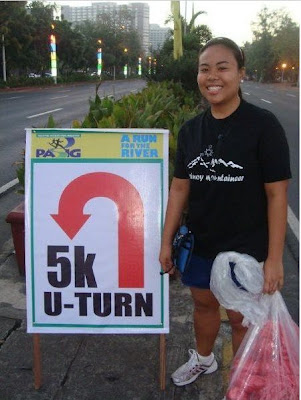 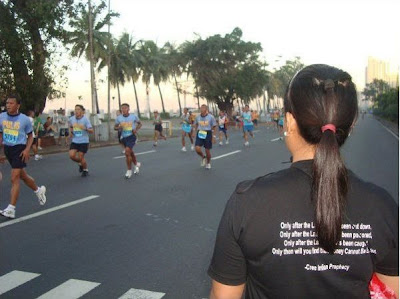