Posted by Jovial Wanderer on October 08, 2015
With Tagaytay's cool weather, bustling food scene and that gorgeous view of Taal volcano that never gets old, a visit, even for just a day is always delightful.  :)
Joining its endless row of dining establishments is Sisterfields located inside its partner hotel, Summit Ridge. It's a newcomer, but one that cannot be ignored, being a member of the Cravings Group which owns several successful business ventures - a few of which include C2, The Coffee Beanery (ah the coffee and cake all you can promos!), Center for Culinary Arts, the Philippines’ premier culinary school and one of my favorite restaurants, Cravings.

Adopting a Farm to Table concept, dishes are prepared with ingredients that are locally grown, either by the restaurant itself or bought directly from its source. It will feature Filipino dishes with Batangas beef, produce from the town of Taal and Tagaytay, organic juices and of course, artisan coffee blend, Pahimis from Cavite.
Its menu, which promises comfort food with an elevated taste, was created by Chef Noel dela Rama, an acclaimed New York-based personal chef. He graduated with a Culinary Arts degree from Culinary Institute of America (Trivia : author and tv personality Anthony Bourdain also graduated here) and  has a Baking and Pastry Arts degree from The French Culinary Institute in New York.

On its soft opening, the Sisterfields team graciously welcomed us for a taste of what they will be serving to their guests.

Its airy interiors has an unassuming, family restaurant appeal, a complement to their menu.  It's walls and ceiling have cheery illustrations of pineapples, a major product of Tagaytay.
Our dining experience made me feel like I'm hiking towards a mountain's summit but I'm hardly sweating. There's a sense of excitement that slowly builds up with each plate presented on the table. There are eye popping views  too - but it's not over the horizon, instead, it's on the plate and everything I laid my eyes on is edible.

We sampled five appetizers and it was a shame that I could not consume everything.
On the photo above are Tinapa Spring Rolls with Sweet Chili Sauce (PHP 145)  and Crispy Tawilis with Kaffir Lime Aioli (PHP 140). These two are straight-forward dishes but its sauces complimented its tastes very well. I personally enjoyed the Tinapa Spring Rolls. It was crispy and light on the stomach, an ideal appetizer.  As for Tawilis, a freshwater fish which can only be found in Taal Lake, I prefer it as a main dish with lots of rice on the side. :)
Another dish on the menu that's easy to love is chowder. Their  Potato, Corn & Bacon Chowder  is creamy and flavorful, delivering that homey taste expected from this thick soup.  The lone bacon was  a nice touch. It's thin and crispy,  like munching on a potato chip.

Next on our table were the greens -  Chopped Salad with Green Goddess Dressing (PHP 320) and another salad with Kamias, Jicama, mango, lettuce and bagoong Balayan Vinaigrette (PHP 240). Both salads featured fresh, juicy produce and innovative sauces. Of the two, I prefer the latter. Bagoong and vinegar was an unexpected mix. I did not think that two would go well together but the creative folks in the kitchen did a great job of balancing the flavors. The strips of mango were sweet and counters the sourness of kamias and saltiness of bagoong vinaigrette.
By the time the main dishes arrived, I was already half full but they were all so nicely plated, it was hard to resist and I welcomed each with enthusiasm.
Cerveza Negra braised boneless beef was very reminiscent of caldereta except this one had creamy mashed potatoes at its base. It was so creamy, I initially thought it was cheese. The beef looked as though it'll melt right inside your mouth, I enthusiastically dig in. It was so tender, you won't need a knife to cut through it.

The next two meat dishes were the delightfully crispy Southern Fried Chicken (PHP 575), (its skin had a buttermilk taste, a personal fave!) and the tender and tasty, Sticky Baby Back ribs (PHP 450).
The leche flan is creamy and sweet - fitting for its serving size of two tablespoons. Other desserts to try also include homemade ice cream in Ube, Macapuno, Pineapple Taragon and Kapeng Barako (coffee) flavors. There will also be Filipino snack favorites such as Turon Ala mode and Ginataang halo-halo.
With all that eating, I was relieved when it was announced that we will be toured around the hotel by Nathan from Summit Ridge. It's a much needed break  so we won't feel too bloated. We were then told we'd have snacks after the tour. :P Gah, it's the kind of issue I'd gladly deal with.

Summit Ridge Hotel by Robinsons Hotels & Resorts sits on the highest point in Tagaytay. With that, the suites at the 6th and 9th floor have excellent views of Taal volcano. It's located a little farther from the crowd but still along Aguinaldo highway which makes it ideal for staycations. It also has enormous function rooms and is also a favored reception for weddings and other big gatherings. (To book a room, visit the Summit Hotels website).

We also visited Annie's Garden, located at the back of the hotel. Named after Cravings Group President and founder, Ms. Annie Guerrero, it is where some of the herbs are planted and harvested for use in the Sisterfields kitchen.  It's still on its initial stage and being a lover of plants, I look forward to seeing its completion.
After our tour, we returned to the dining area for a cooking demo of another item on the menu, Penne with longganisa, mushrooms and arugula. We also sampled  this dish after. This pasta will appeal to those who prefer their longganisa sweet. 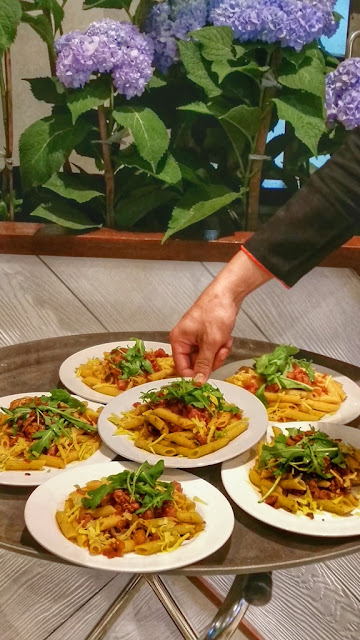 And here's the lovely bunch from CCA who made us happy foodies. Chefs from CCA will take turns in the kitchen when its fully operational. 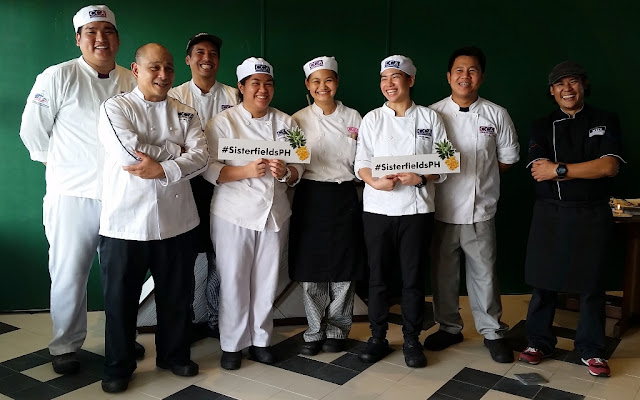 Aside from the restaurant, there will also be an Epicurious cafe (a deli and cafe which has a branch in Shangri La Mall) where guests can dine in or buy freshly baked breads to go.

There's a lot to look forward to at Sisterfields which makes it a worthwhile stop for foodies. I hope to be back soon when its fully operational.

Just a reminder that they're still on soft opening and is currently located at the 2nd Floor. If you find any points for improvement, contact them directly or send them a message on on their Facebook page.

Other Places of Interest in and around Tagaytay :
Aside from restaurant hopping, there's also a lot of places to visit. Among these are The Puzzle Mansion aptly named for its Guiness Record for largest collection of jigsaw puzzles,  Sky Ranch and for hiking enthusiasts,  the nearby mountains  of Batulao, Talamitam and  Apayang (newly opened trail) located in Nasugbu, Batangas, about 30 minutes away. A trail also exists to those who want to get closer  to the volcano but entry point is in Talisay which  is another 20 minutes from Tagaytay


To book a room at Summit Ridge Hotel, Summit Hotels.