Posted by Jovial Wanderer on January 26, 2016
Palaui is a picturesque island, known for its beaches, in Santa Ana, Cagayan Valley, on the northeastern side of the Philippines.  In 2013, it was included in CNN's 100 World's Best Beaches along with Puka beach in Boracay and El Nido, Palawan.  It was also the filming site for the 27th and 28th season of US reality show, Survivor. For our group however, the main draw of this remote island was the prospect of discovering hiking trails. :)

Despite receiving local & international media attention and its tourism taking off, it has maintained its raw beauty. There aren't any hotels or big modern structures here.  Those who want to spend a night would either have to camp or avail of a homestay (like we did) that offers basic amenities. Travelers who don't want to rough it up may opt for a day trip and stay in the mainland of Sta. Ana where there are hotels or travel from Tuguegarao city (where the airport is, but that's 3 hours away) *Check out hotels in Sta. Ana in Agoda.

After a 20 minute boat ride from San Vicente pier, our group which included  Gid, Coby, Julius, Tony, Gonz, Charles and Gab arrived at Punta Verde, the community where the homestays are located. As we neared the island,I looked in the water, it was like glass, you could see through it.  I excitedly put a hand out in the water which felt warm, my first encounter with Palaui!


Palaui Island is declared as a protected landscape and seascape.  Mutilating, defacing  or destroying objects of natural beauty, or objects of interest to cultural communities (of scenic value) and other prohibited acts is punishable by law as stated in Republic Act 7586.

The water was low, the boat had to stop just before the shore. We had to walk a few feet in the water. The sand is light brown and felt a bit coarse on the feet. Thankfully, our homestay was close to where we docked.
After putting our bags down,  some of us decided to walk around to find a store and get  some water and Gatorade.  We just came from a two day hike of Mt. Cagua, an active volcano  in Gonzaga, Cagayan Valley and we were running low on trail food and water. (Travel tip : Buy your supplies before you get to Palaui as there aren't many options in the island.)

As we roamed the island, we saw children playing outside their homes, a rare and relaxing sight for me. We also spent a few minutes by the shore, staring at the glassy water and  listening to the sound of the wind. :) It was close to 6:00 PM, still early but it was already very quiet around the island. 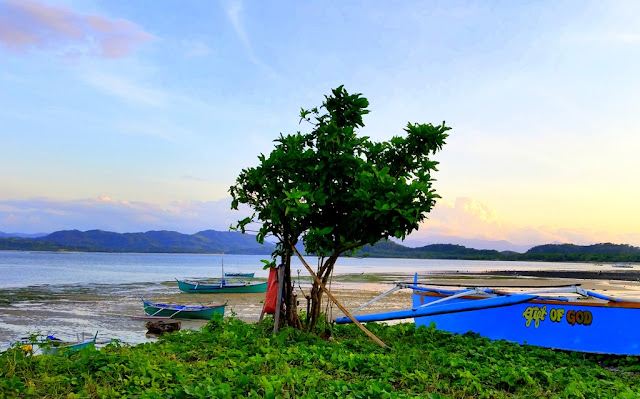 Our accommodation at Madam Elsa's place had two rooms and two bathrooms. It costs 250/head a night which was a good deal. The beds were supposed to fit 8 of us but we would be brushing on each other's skin if we pushed it. It would be quite awkward especially for me, the lone female in the group. Although the group's chemistry was good, most of us had just met a few days before. :P Two people in our group slept outside the rooms to get a good sleep.
At 5:30 AM the next morning,  we set off for our hike.  Our group, with 8 people had to get  two well-trained guides. One of them gave us a briefing and took the lead while the other, ate Noni, stayed at the back of the pack, ensuring that no one got left behind.  We headed off first to Lagunzad trail,named after Filipino ecologist Dan Lagunzad who helped identified the flora and fauna in the island. Its entry point near the beach gave us a good view of the sunrise.  It would have been a more glorious sight if not for the clouds partially covering the sun as it rose over a pink sky.

The trail involved some light hiking passing inside a forest filled with marked trees and to a wide grassland with rolling terrain  reminiscent of the landscape I've seen in Batanes.  The highlight of the trail is what remains of  Cape Engano, a lighthouse built during the Spanish colonization period, completed in 1898. (Note : Those who don't want to hike can opt for a boat ride from Punta Verde). Situated on a hill, it not only offers a glimpse of history but also scenic viewing areas featuring Dos Hermanas island, Siwangag cove and sections of Babuyan group of islands.
After visiting the lighthouse, we ate our packed breakfast (ordered from our homestay) at the registration area. There's a restroom and a store where you can buy cold drinks and souvenirs.

Below's a clip of the view from the lighthouse. :)

Our route back to Cape Engano was through Leonardo's trail, named after another renowned Filipino botanist,  Leonardo Co, who also studied plant species in the island. Those who have taken an interest on Philippine plants would be no stranger to his name. (Check out a snippet of a documentary on Leonard Co's early life here.) With his unfortunate passing in 2010, I find it sad that I could no longer have the chance to meet such an inspiring man of science. (Trivia : Lagunzad and Leonardo's trail were inaugurated in 2011 in honor of Daniel Lagunzad and Leonardo Co, two great Filipino botanists who conducted field studies in Palaui. Source :Philippine Native Plants Conservation Society Inc.)

Leonardo's trail was three times tougher than Lagunzad trail with its steep rolling sections.  When taking this trail, I advise you to bring ample  snacks, water and footwear with good traction. It's a challenging hike and not advisable for those with knee injuries.

By 12 noon,  we were back to our homestay in Punta Verde where lunch of lobster, fish and shrimp was waiting. :) After another two hours, we boarded a boat back to San Vicente Port so we can travel back to Manila in the evening via Tuguegarao.

An account of our hike in Palaui island is also posted on Gid's site, Pinoy Mountaineer.

Palaui Travel Information
How to get to Palaui Island - check out this helpful guide by Lakwatsero.
Other sources :
Out of Town Blog : Palaui Travel Guide
Two Monkeys Travel Group : Palaui and Tuguegarao DIY Guide

Notes :
- apart from hiking, other activities include island hopping, snorkeling, diving. Once in Palaui island, it is easy to ask around and arrange tours.
- Smart has limited network signal  in Palaui (no LTE but I could send out a few texts on some parts of the island).
- no ATMs or credit card facility, bring enough cash
- bring insect repellent (if spending a  night at homestays) and  power banks or extra batteries as power supply is limited.
- aside from visiting Palaui island, you can combine it with a trip to Callao Caves in Penablanca. (Travel info here.)
- bus fare from Victory Liner Kamias to Tuguegarao is 850 PHP, first class. Travel time is 11 hours (as of January 2016). To shorten travel time, you can also fly to Tuguegarao or Laoag from Manila via PAL (flag carrier of the Philippines) or Cebu Pacific (budget airline).

Thanks again Julius De Vera (for arranging the logistics), Gideon Lasco (for organizing the group) and to the rest of my awesome hiking buddies Coby, Gonz, Tony, Charles and Gab. :)
Backpacking Cagayan Valley Hiking