Posted by Jovial Wanderer on December 16, 2016
Samal island in the province of Davao del Norte is known for its beautiful beaches but if
you’re craving for a refreshing mountain scenery, there's a nice trail going up Puting Bato. At 410 MASL, it is the island's highest peak, offering views of the sea and nearby mountains.  Its name, translated to English is White Rock, drawn from a prominent white limestone wall at its peak.

From Davao City, I took an Island City Express bus to Samal Island. The bus also stops to pick up passengers at Magsaysay Park but to get good seats, I took a cab to the terminal along F. Bangoy Street. Taking a  bus was quite convenient. I didn't even need to get off when the bus got to the port as crossing time only takes about 15 minutes! Another entry point is at Sta. Ana Wharf where motorboats take passengers straight to Kaputian and Talikud islands.
At Babak wharf, the bus continued its journey to Penaplata, its last stop. From the terminal, I boarded a motorbike and the driver took me to the jump-off at Guilon, the longer and steeper of the two entry points to Puting Bato peak.  To maximize my day trip, I decided Ito do a traverse - go up via Guilon then back down via the shorter and easier trail at Brgy. Tayapoc.

As we parted ways, the driver expressed concern about leaving me alone but I assured him I'll contact him  if I ran into some issues. He  wanted to come along but he said he is no longer fit to hike.

When he finally left, I felt a familiar sense of excitement of seeing a new mountain and setting off on a new trail! :)

As it was my first visit, I decided to look for a guide. A local I met near the jump-off  called on his nephew to accompany me to the peak.

The trail is mildly steep all the way passing through a clear path filled with trees on both sides.  I was breathing quite heavily all throughout but thankfully, it only took less than an hour to get to the campsite where  I rested on a bench and  paid an entry fee of 10 Pesos. From here, you can see a view of the ocean and nearby islands.

After resting, my guide gave me directions to the summit. I paid him 150 Pesos, the rate we agreed on and parted ways.  The peak is only 10-15 minutes away through an exposed trail with grasses taller than my 4'11 feet frame. 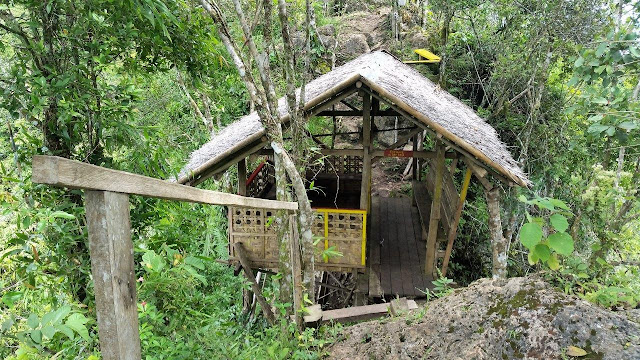 After the grassland, the view got even more beautiful. Another hut, fascinatingly built on a ravine, served as a view deck and rest area. 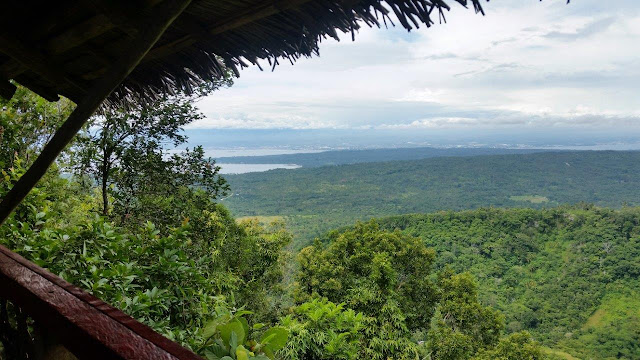 Walking further up, I walked in a middle of a large garden surrounded with colorful flowers - bright pink, orange, yellow, purple!  A signage said I was at Huyong-Huyong Mountain Park. Yellow benches strategically placed near the cliffs offered views of the sea.

A group of dogs started barking at me which caught the attention of the occupants of the hut, a woman and a child.  Here, I  wrote on my name on a log book and paid another entrance fee of 10 Pesos. 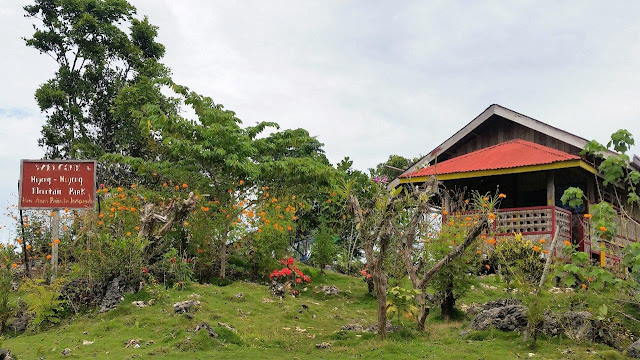 I  ran into another gated area and waved to some locals and started to make my way down. I think there's a trail here that leads to the area just below the white limestone wall but I  skipped it because was beginning to feel tired. I made my way down towards Brgy. Tayapoc. Some hikers enter the mountain on this side where the trail to the summit takes about 30 minutes.

When I got to the jump-off, I asked some locals for some directions to Canibad, the closest beach. There is a trail that takes another hour but to save my energy for swimming, I decided to flag a passing motorbike. The driver, a young guy who looked like he couldn't be more than 16 years old, was impressive. He knew how to navigate the super bumpy road towards Canibad quite well. It was an uncomfortable ride which was actually felt more tiring than earlier's hike.

The driver picked a resort and let me off. A huge signboard that said "Canibad Adventures starts here" welcomed me. I couldn't see any people or even the water.  Living up to its name, the path towards the water is on this super steep dirt trail down a cliff! 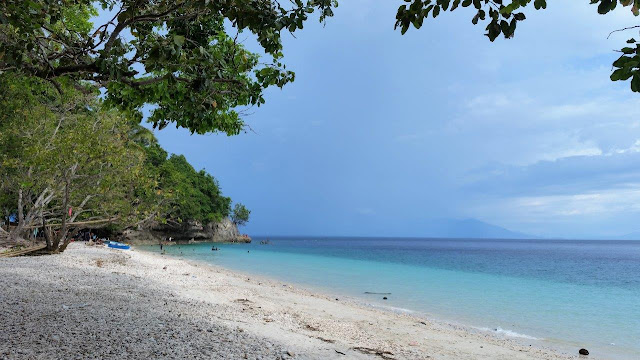 As though I was hiking a second mountain, I was sweaty, breathless and feeling annoyed by the time I got to the resort's main entrance but the annoyance brought by fatigue (incidentally, it was also that time of the month making me feel more moody than usual :P), quickly disappeared as soon as I saw the beach. While the shore is filled with pebbles and rocks, the water is beautiful -  still as a river and as clear as a pool! There were many people but the groups were well spread that you can get a quiet spot and enjoy.

The resort charge a minimal entrance fee of 20 pesos. Cottages can be rented for 250-350 Pesos but since I was alone, I just walked to the beach, put my backpack by the shore and jumped in the water in my hiking clothes. Though water was clear, I felt a strong current pulling me out towards the sea so I stayed in the shallow area.

Fellow visitors were very friendly and I actually felt like I could walk up to anyone and join their group but I was really enjoying my time alone, I didn't have too. The water just felt so nice!
After swimming, I walked up to another resort to use their shower facilities. I wanted to get a nice, heavy meal but unfortunately, there's not much food around here but snacks.

I dreaded the steep set of stairs I had to take to get back to the main road so I walked around a bit in search of a gentler way up. I did find one - a concrete stairs with smaller steps. It was easier indeed but still tiring.

Lunch was at Aznebo Grill and Restaurant, a popular food establishment in the island
offering delicious Filipino dishes  that come at affordable prices (around 100 Pesos for a combo meal).

By 6:00 PM, I was back in Davao city exploring its restaurants! :P

As a first time visitor to Samal island, experiencing its greener side turned out to be a wonderful surprise. A return trip is in order!

Samal island is among the destinations featured in this helpful interactive beach map from Expedia. Visit the site to learn more of the country's breathtaking  island getaways.

How to get to Puting Bato Peak

From Davao City, board a Island City Express Bus.
The terminal is at F. Bangoy Street but it will also make a stop at Magsaysay Park.
Fare to Penaplata is 50 Pesos. From the terminal, you can board a habal-habal to the jump-off.

As of November 2016, the only fees being paid are the ones located at the rest stops on the mountain. Guides are not required especially when entering via Brgy. Tayapoc as the trail is established. However, if taking the Guilon trail for the first time,  it is recommended to get a guide. It's a longer trail that takes 1-2 hours and has some forks along the way. There is no established guide system but you can always ask around. If hiring a guide all the way to the summit and back, a rate of 200-250 Pesos would be fair.