5 Things To Know About Angkor Wat

Posted by Jovial Wanderer on December 27, 2017
If you ever get the opportunity to visit Cambodia, it’s likely that Angkor Wat will be high on your list of things to see. Though the country is also known for beautiful beaches and local culture, Angkor Wat is in a league with some of the most famous wonders of the world, and deserves every traveler’s attention. That said, it’s also a very misunderstood historical attraction, and it pays to know a little bit about a place like this before you visit. Thus, we wanted to write up a brief guide of things you should know about Angkor Wat. 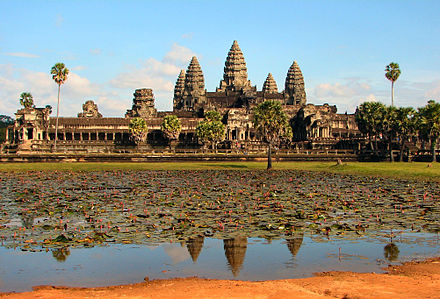 1. Angkor Wat Is About 900 Years Old
Sometimes we lose a little bit of perspective when it comes to dating ancient wonders. For instance, we get used to the idea that things like the pyramids of Giza or Stonehenge are literally thousands of years old. Meanwhile, some other wonders like the Taj Mahal are far younger – in that specific case, only about 360 or 370 years old. But Angkor Wat falls somewhere in between ancient and modern wonders. It was built between roughly A.D. 1113 and 1150, making it roughly 900 years old.

That sounds nice, but when you really think about what was going on in the world around that time it’s rather incredible. In the 12th century, the Renaissance was emerging from the High Middle Ages, gothic architecture was first taking hold in France, and the Song dynasty ruled in France. It was during this time that the Khmer Empire in Cambodia was at the height of its power, which makes the structure of Angkor Wat seem all the more impressive.

2. It Was The Center Of The World’s Largest City
Unless you’re fairly sharp on your Cambodian history, you might not realize that the name Angkor Wat comes from the name Angkor, which was at the time of construction the capital of the aforementioned Khmer Empire. With a population that likely exceeded one million even in the 12th century – when there were still fewer than 500 million people on the entire planet. That made Angkor the biggest city on Earth for quite some time until the Industrial Revolution gave way to faster construction and bigger cities in the West. Imagining ancient Angkor Wat within this context gives it new significance.

3. It’s Not Indian
Clearly Angkor Wat is not in India, but there still seems to be a widespread misconception that it is of Indian origin. We do know that it was built originally as a Hindu temple, and thus in a way there was Indian influence. Some claim it was actually Indians living abroad who constructed the temple, such that the monument is often credited to Indian lore, right alongside the Taj Mahal. One modern gaming series even appears to use an Angkor Wat-inspired temple as background material. The games, hosted by Slotsource, follow an Indiana Jones-like adventurer to various ancient civilizations, and the “Pearls of India” game, while not exclusively using the temple, sure appears to glorify Angkor Wat.

The truth is simple. Angkor Wat was built in the 12th century (as mentioned) by ancient Cambodians who may have spent time in India learning about culture and architecture. Thus, while there is Indian influence, the building wasn’t actually conceived of or built by Indians.

4. It’s Still An Area Of Active Worship
This is a quick point, but one that may be of particular interest to prospective travelers. Angkor Wat is an ancient temple that is now primarily a tourist attraction and a monument to history. However, there are still active temples in its immediate vicinity – reminiscent of the city’s history, during which there were at times hundreds of temples serving the population. Thus, while it does receive a lot of attention from tourists, Angkor Wat is still a place for reverence.

5. There’s An Ancient City Beneath Angkor Wat
If it’s not already impressive enough to think of Angkor Wat as an enduring symbol of a 900-year-old city, recent research has indicated that the surrounding area was actually populated before Angkor became prominent. According to Baby Elephant, brand new laser technologies recently combed over the area, resulting in the discovery of the city of Mahendraparvata – a Khmer city that is dated to 300 years before the construction of Angkor Wat. That discovery came in 2012, and in 2016 evidence of even older cities in the immediate area emerged – some of them perhaps as old as 1,400 years. All of this only deepens the palpable sense of history you get visiting this incredible area.

Note : The above article was contributed by one of the site's guest writers. If you have any concerns about this post, please send an email to tine.fernandez@gmail.com.