Posted by Jovial Wanderer on May 19, 2019
Initially, I wasn't keen on joining my friends for an early morning trip to the fish port, a popular attraction in the country's tuna capital, GenSan. Due to lack of information, I had misjudged the place to  be a big tourist trap, chaotic, wet and smelly. Admittedly, I was wrong and I'm thankful I was swayed to join them.

General Santos Fish Port in Barangay Tambler covers 32 hectares and is the Philippines' second largest fish port, next to the one in Navotas. (See traveller reviews on Trip Advisor here.) 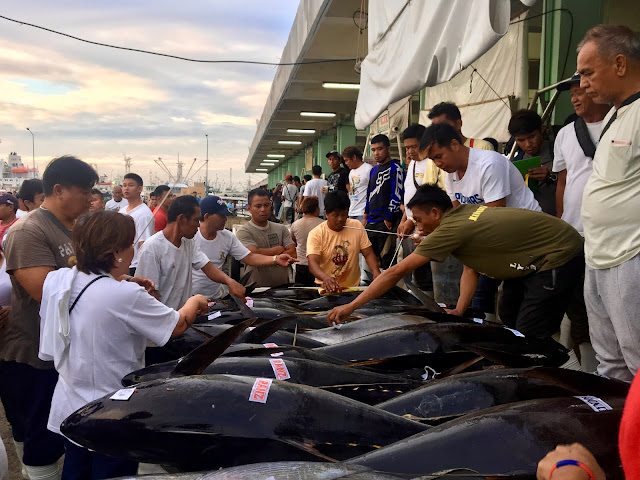 That morning, we were up before the sun lit up the sky. Fortunately, our hotel, Square Suites, was willing to serve breakfast earlier than usual (Book here). By 5:00 AM, we were out trying to hail a tricycle to the fish port complex (if I remember correctly, we paid around 200 Pesos for 4 people). It's about 25 KM away from the hotel and by  6:00 AM, we were at the gate. We registered and left one  ID for the entire group. Then we hitched a ride to the office to rent boots and jogging pants since I didn't have any clean ones left after our hike up Mt Apo. (Tip: Bring your own socks to wear inside the boots. If you forgot, there are socks on sale for 20 Pesos.).

The port was a short walk from the office. At the sight of water, I was immediately drawn to the seaside. Though it was crowded with fishing boats, its water was attractive and clear, an enlivening view.

Just across the boats is the area where the main action was - batches of tuna displayed on tables, people walking around carrying fish on their backs, half the size of their bodies.  I noticed some carrying a long, thin metal rod which I later learned is called a sashibo,  a tool used by tuna graders to determine the value of a fish. It's plunged into the  core of the tuna to extract a portion of its flesh. Its color, fat and texture determines its price.

The most exciting thing was witnessing the bidding where people shouted maniacally to get the best ones. The energy was as electrifying as watching the finals of a football game. As quickly as the mania began, the bidding ended. People plastered stickers on the fishes, names of the businesses that won the bid. 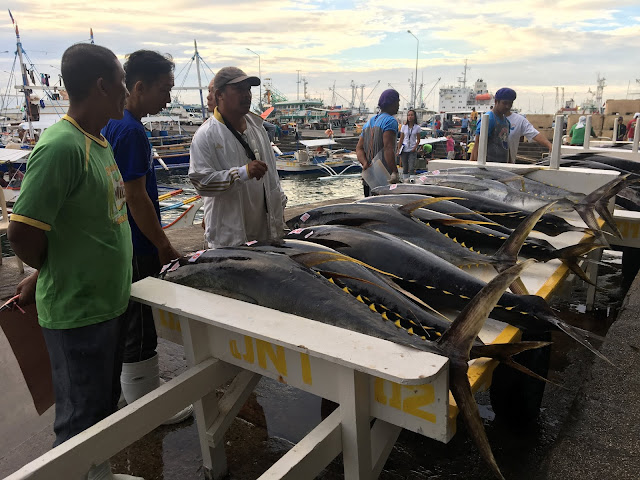 We took a few more photos around the port. We were careful and made sure to stay out of the way of the people who were actually working. In less than an hour, we were ready to go and we stopped by the office to return the boots and pants and buy souvenirs (they sell unmarked canned tuna, shirts and magnets at reasonable prices).
Much as this was a fun and exciting experience, it brings to mind, a conversation I had with a vegan friend who shared with me the issue of depleting tuna population as a result of exploitative fishing practices. If we can't avoid tuna, we can help by being mindful of supporting brands that adopt sustainable fishing methods. For awareness, here are some articles on this issues  : Jamie Oliver.com : Is Eating Tuna Sustainable and *MSC : Buy Sustainable Seafood. *MSC or Marine Stewardhip Council is a non-profit organization that believes that "everyone can play a part in protecting the future of our oceans and fish stocks, while enjoying seafood, not avoiding it."

Travel Notes:
Be respectful and keep out of the workers' way. Be mindful when taking pictures as you might accidentally get hit by workers carrying large fishes.
Saranggani Highlands is a good stop to have a snack  or breakfast after. You can take a tricycle to the main highway and get off at the junction and hire a motorbike.

Other places of interest : You can drop by GenSan after your hike at Mt. Matutum, a volcano with a beautiful forest in Tupi, South Cotabato. Blog post here.

Where to Stay in GenSan:
We spent two nights at Square Suites which is right along the highway. Rooms are clean and beds are comfy. The bathroom could be improved as the tiles are getting yellowish. Overall, with its friendly staff, cold aircon and good beds, I'd stay here again. (Rate : Triple Room at 1500++.) More details here.

This post is part of a series about our travel around SOCKSARGEN region, an acronym of the provinces and city that comprises Region XII. It stands for South Cotabato, Cotabato, Sultan Kudarat, Sarangani and General Santos (Gen San) city.  We have collaborated with the local tourism unit to help share the beauty of this region and encourage fellow travellers to visit SOX next.