Posted by Jovial Wanderer on November 17, 2020
Established in 1594, Binondo is the world's oldest Chinatown, drawing visitors not just for its historical significance but also its food scene. (Read : Esquire | How Binondo became the World's Oldest Chinatown).  In 2020, Chinese New Year fell on the 25th of January. Incidentally, I was in the area!

Even for someone like me who's averse to crowds, the lively vibe of Binondo at this time felt so welcoming, I couldn't help but feel festive. There were a lot of people in the streets wearing something red,  huge billboards are advertising new year activities,  streets  are decorated with red lanterns, even some roads are closed to give way to events.  The energy is electric, it makes me feel as though I'm part of the celebration, even if I'm not of Chinese descent. 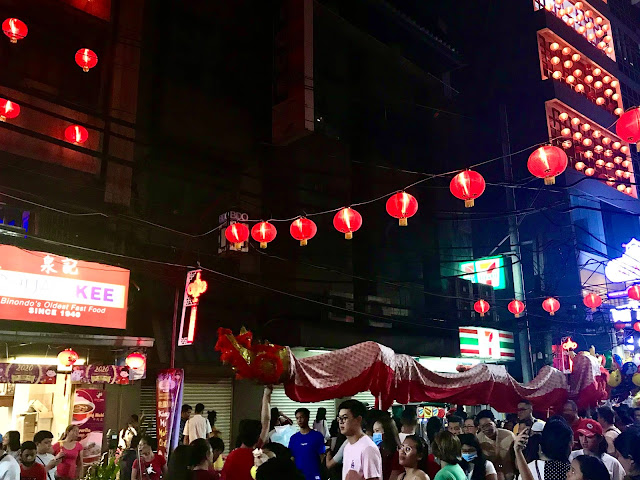 We met up with Ed's friends for a quick snack at Tasty Dumplings. Though the interiors are far from chic, service is fast and we got to eat some satisfying steamed dumplings which I paired with wintermelon juice.  If you want to dine for a heavy meal, try the restaurant's specialties, porkchop rice and hongma (braised pork chop in soy sauce).

Since we had something planned for  Sunday, we decided to attend the anticipated mass at Binondo church. Right across the street is Plaza Lorenzo Ruiz, where a big crowd gathered near the stage, waiting for a dance contest to start. (Note : If you're looking for place to live close to Binondo,  consider Celadon Park,  a project by Alveo Land, just3.5 KM away from Binondo church via Abad Santos Ave.)

The church location is strategic and can be your starting point when food tripping  in Binondo.  (Check out, Binondo Food Trip Guide (2020) by Out of Town Blog.)

After the mass, we tried to look for a good restaurant for dinner. Unfortunately, with the holiday, most restaurants in Binondo are packed! While walking around, the lively sound of drumbeats suddenly filled up the streets. We made a dash towards it, navigating our way around the crowd to catch the dragon dance.


Walking further along, we saw children doing their own version of the  dragon dance. With their DIY masks, makeshift drums - an empty 5 gallon water bottle, they caught a lot of attention from passers by. I felt sorry that they were in the streets, but a huge part of me also felt admiration for their grit and creativity.  They caught a lot of attention too other people. I noticed many stopped to take videos, give money, some even gave them food. I feel that it wasn't purely  out of pity, but because they  genuinely appreciated their raw performance.
Continuing our walk, we saw a lot of street vendors selling figurines of the metal rat and other animals from the zodiac,  bracelets and fruits.  I stopped to buy kiat-kiat, those sweet, citrusy mini oranges. Easy to peel and quite refreshing, I could imagine it to be an excellent trail food for a quick day hike.

We made a short stop to another historical attraction in the area, Jones Bridge. Around the last stretch of 2019, pictures of the Jones bridge circulated around social media, when its  rehabilitation was completed, so we wanted to see it for ourselves.

Named after William A. Jones, it served as memorial to the House Sponsor of the Jones Act which promised the independence of the Philippines from America, once a stable government was established.  The bridge was completed in 1920, two years prior to Jones' death, but was destroyed in 1945 during WWII. In 1950, it was rebuilt by the US-Philippine War Damage Commission. 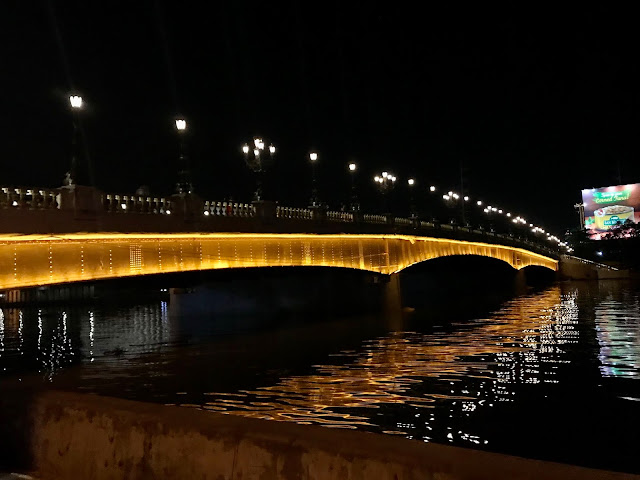 To cap off our evening, we had dinner at 1919 Grand Cafe, an old  repurposed building of HSBC  built in 1922. There was line to get inside the restaurant. Fortunately, we were seated in less than 20 minutes. The menu is a mix of Western and Chinese dishes. To give way to our cravings, we ordered dimsum and rice, which were worth the wait. I also ordered iced black coffee and it was good! Adding to the nice dining experience were the staff, all were all-smiles and efficient. It was definitely a nice way to end the first day of the lunar new year.