Posted by Jovial Wanderer on February 05, 2010
I’m a huge fan of Valentine’s day. It’s my favorite occasion next to Christmas. There’s something so festive about it that I can’t help but feel joyful whenever this occasion arrives. It’s not even the prospect of romance that excites me – it’s all the fuss that people have over it. There’s tons of sales on clothes, food and there’s red everywhere which reminds me of Christmas.

For some people, this day comes as a slap on the face – a reminder of their lonely existence. Well, I’ve never had any romance either except for my love affair with football and nature but I’ve always believed that Valentine’s day is for everyone who has someone or something they love – like sports, friends, families, boyfriend, girlfriend, husband, wife, children, God, food, etc.

Valentine’s day has always been a happy occasion for me. There was one V-day when I organized a dinner for family friends and neighbors. My mom cooked and I washed the dishes after. I think all the guests at that gathering were single. Hehehe! It was just a simple meal but we all had a great time. I even gave out candles as souvenirs. Then I remember several occasions back when I was still in school when I had received gifts from friends.

Last Valentine’s Day was my most adventurous V-day celebration to date. I traveled on the first flight to Davao City on February 14, found my way to Davao Del Sur by asking a staff from Jollibee, hiked to a remote community where everyone stared at me (I guess I might have looked lost), left my stuff at a local’s place and went water tubing in Sibulan River with a young guide I just met. After that, I hiked back to the main highway, rode a jeep and bus and successfully made my way to Kidapawan City (North Cotabato) using the information I got from the guides at the water tubing station. 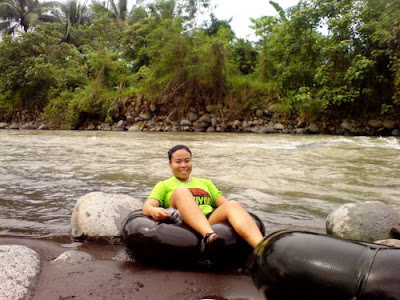 By mid afternoon, I was on top of a jeep together with chickens, onions and other people bound for Brgy. Ilomavis, one of the major jump-offs to Mt. Apo which I came to see. I arrived just as the sun was setting. I was supposed to stay there overnight but I got a little paranoid because these two guys  kept bothering me. I was contemplating on hiring a habal-habal (which costs 150-250 pesos), but I didn’t want to do it because #1 - I was on a budget #2 - I’m scared of motorbike rides #3 - I don’t know the driver and we were going to be riding amidst farmlands, forestry, vacant lots (I was such a paranoid traveler!). It was then when I ran into a group of mountaineers from Manila, timidly introduced myself and sort of invited myself to ride with them back to Davao city. Valentine’s day ended with me having dinner in Kidapawan City with my new mountaineer acquaintances . We dined at a quaint barbeque place at the city proper where we feasted on roasted chicken and rice. I had the chance to chat with some of them and jived with them. 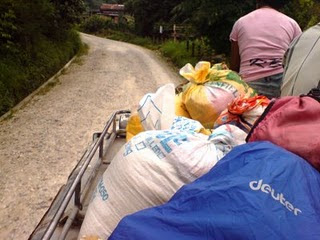 I checked in at GV Hotel in Davao city close to midnight. It’s a budget hostel which was referred to me by Lyn, one of the mountaineers who lives in Davao city. GV Hotel was offering promo rates for couples. I was lucky enough to snag one of the two remaining available rooms that Valentine’s day. I got a little freaked out that I might hear moaning all night but fortunately, it was a peaceful evening.

The following morning, I roamed around Davao city and then, about three hours before check-in time for my afternoon flight back to Manila, I decided to board an ordinary bus headed for Tagum city – in Davao Del Norte. I made it to Tagum just in time for me to walk less than 30 minutes around the main highway. I was able to chat with a nice local guy . He offered to tour me around but I didn’t have the time. He stayed with me until I was able to board a bus back to Davao City. I made it right on time for check-in and as I entered the airport, a familiar face welcomed me. It was one of the guys from the mountaineering group I met in Kidapawan. Incidentally, he was the only one from their group flying back to Manila that afternoon. The plane was delayed which gave us more time to chat. We even ate dinner together. Another new pal. What a nice treat. I don’t have an idea where that new pal is now. We lost touch about two weeks after we returned to Manila.

Valentine’s day 2009 was a tough act to follow. Though I am quite optimistic that I can still top it with a new adventure, I currently don’t have an idea what to do. My budget for traveling this 2010 is severely limited as my career isn’t going well but my faith is strong that everything will go well. I can probably afford a 500 peso adventure. Hmm..what to do?
Backpacking Davao City Davao Del Norte Davao Del Sur Solo Travel