House of Dakay in Batanes

Posted by Jovial Wanderer on November 21, 2010
June 2009
The driver brought us down at the corner of the House of Dakay, which is one of the must-sees in Batanes. It’s the oldest stone house in Batan Island from 1887 and has been featured numerous times in various local and international publications.  It is also a UNESCO Heritage Building. The current owner is lola Florestida, a friendly  woman in her 80’s who has also become famous because of their house.  I also read from several blogs that she is perhaps the most photographed woman in Batanes.
My friend and I took pictures of the house from the outside. Usually, visitors only take pictures of the façade and leave. I was not satisfied. I wanted to go inside and take a look and have a chat with lola Ida. We walked with hesitant steps towards the house. I was actually afraid there might be a fierce dog somewhere who will spring and bite me on the leg. (Yes, I am vividly paranoid!)
Slowly, we made our way to the door from the left side. I saw an old lady walking in the middle of the room. Oh, she must be that famous Ivatan! In my most active tone, I yelled, “Good afternoon pohhhh!”. The old lady jumped two steps back and held her heart. She remained speechless and frozen in her place for a few seconds. Her eyes bulged and she looked at me as if I were a ghost or perhaps a criminal. For a brief moment, I thought I had caused her a heart attack because she remained motionless for a few seconds. When she regained her composure, I apologized profusely from the door. Remembering the efforts we made to get there, I asked her if we can enter her house in a timid voice. To my relief, she said yes. She seemed to have forgiven me and we were able to chat nicely after that.
She sat on her bed while our eyes wandered around. The house was more like a small room. The floor and tables were dusty. I felt sad. Here was a UNESCO building and only the façade appeared to be in good shape. I wondered if she was receiving help from the government.
I took out my camera and turned on the video. She began telling about the house in a clear voice. Since I have already read from blogs most of what she told us about their home, I began asking her juicier questions. I asked about her lovelife, the answer to which she averted with poise. Hehe. I was just curious you know. She did mention about a son and about a sister she lived with. I forgot about the rest of what we talked about but before we left, we gave her something to help her out.  She never asked or made a hint to give her something in return. It’s just our own little way of thanking her for accommodating us warmly and somewhat of a  peace offering for accelerating her heartbeat. :P 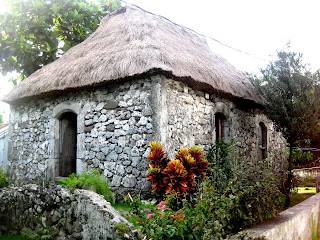