This Is It! The Corregidor International Half Marathon 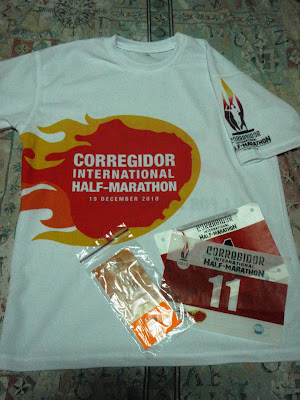 "Set against the paradox of a breathtaking landscape amidst the contrast of a serene backdrop and an unforgiving terrain,contenders will attempt to be part of a race to immortalize the heroic legacy of a glorious past. The distant bygone arena of valor belongs to the present. And the present becomes the ultimate touchstone of running athleticismin the Corregidor International Half-Marathon." - CIHM website
I've been quite busy and tired the past two weeks that I haven't had much time to digest the fact that I'm joining the Corregidor International Half Marathon (CIHM) this December 19, which I joined without thinking. When our marketing officer asked who wanted to go because we had free slots, I immediately volunteered myself because of the word "Corregidor". I completely forgot about the other part which would involve a 21 KM run. Oh why do I always get myself into situations that involve heavy breathing, intense perspiration and aching joints?It would be my 3rd time in enchanting Corregidor and my first time back after high school. If only I didn't have to run, I would have been jumping up and down with excitement. I haven't been on a boat for a while either. Last one was aboard a kayak last September so I'm don't think that counts.

Though I am no stranger to running, I don't consider myself as a strong runner especially not road runs. It's because I have a lazy ass that prevents me from getting out of the house early in the morning to train. My only redeeming quality is that I can do uphill terrain well because of those muscles that involuntarily developed from playing football. Hehe!
I feel slightly panicky because I haven't had the chance to train adequately. My most recent run was at the Salomon Blaze the trail race in Subic which was last November 13.  I joined the 11KM and had a strong finish  though- all thanks to my survivor's kit - Stinger Energy Gel, Pocari Sweat and my inimitable mental attitude to come out of any situation alive and kicking.  I just needed to constantly watch after my heart rate and water intake because I came across news about deaths in races because some athletes were pushing their bodies too hard. My goal for every race, given my lack of training (blame it on my lazy ass!) is to survive and cross the finish line smiling. I think for this instance, I shouldn't set my standards too high and aim for a podium finish. Please, I am not that delusional, just occassionally. :P
I was actually reading about the race details earlier and  had to pause for a while and take a deep breath before I read again. The CIHM is part trail, part road. Now I can do  trail, but road? I used to join road races before but never really got hook to it. It was just another adventure that I wanted to try. This would be my longest road run to date and from now onwards, I commit myself to train the best way I can. I got to ease up on those carbs  and increase protein intake so I won't feel bloated. For now, I will have to temporarily say goodbye to sweets and junk food and get back on the jumping rope and focus on the finishers medal. I saw it and it looks cool. I definitely want to earn one. Hehe.
Thanks to my every supportive employer - R.O.X. and the organizers for the complimentary race kit. See you in Corregidor!
Corregidor Running