First 21K for 2011 – Thanks to Nathan Sports Philippines!

Posted by Jovial Wanderer on March 17, 2011
One of the main reasons I run is because I love to eat. For me, the most enjoyable time to devour food is after a physical activity - when I’m all famished and sweaty. The bloated feeling is non-existent. Eating becomes a reward rather than a guilty pleasure.

Runs for almost every cause have sprouted and goes on the entire year but I have become quite selective in deciding which ones to join as I’m not that into urban runs. However, I still participate from time to time for the sake of a decent exercise, when the race organizer is reputable and most especially when the race kit is free!

So when Nathan Sports Philippines sponsored a contest with race kits for the  Run United 1 2011 as prizes, I immediately sprung on the opportunity and submitted an entry. It was about our most challenging run, which was not a dilemma to write because I already have a run in mind. My entry here.

A few minutes before gun start, I lined up excitedly among hundreds of runners at the 21 KM division. I had just consumed my favorite energy gel from Stinger and gulped down 330 ML of Pocari Sweat. Stinger Chocolate gives me energy that’s good for 10 kilometers and what I love most about it is that it tastes like Brown Cow! Pocari Sweat on the other hand, based on previous experiences, helps improve endurance

I surveyed the crowd. Everyone looked excited. I spotted a friend a couple of feet away. It was his first time to join 21 KM. I went to his side, gave him a hard tap that was supposedly a friendly gesture and wished him luck.

A couple of seconds later, the race started.

With the huge number of participants, it was a bit of a struggle to break away from the crowd and rev up to my normal pace. I didn’t mind as I wasn’t in a hurry anyway. 21 KM was a long way to go.

I felt happy when I finally reached the 10 KM marker. I was still feeling okay. I checked my time. It was just average. I consumed my second energy gel. This time - it’s Apple Cinnamon from Hammer and it was yummy! I could get used to snacking energy gels! Haha! It was my first time to try this brand which was highly recommended by a serious runner friend.

Up until that moment, I believed I could top my time from my previous half marathon in Corregidor last year. However, a few meters outside the 10 KM mark, I suddenly felt like peeing. There were several fast foods along the route which I past thinking I could still last until the finish line. I figured I could sweat it off. To my horror, I wasn’t sweating much. (Must be because of my pace) Not taking a restroom break when I had the chance turned out to be a big mistake.

The last 3KM were agonizing. I couldn’t see any other nearby restrooms and so I walked the rest of the way. I felt cold and badly wanting to pee.

I managed to run the last few meters to the finish line – where many people were watching. Haha! I couldn’t walk even if I wanted to because people where cheering every approaching runner. I had to salvage my pride somehow and finish the race running and with a full smile.

My time was 2.47 hours - which needs improvement, but I was just happy that I didn't trip somewhere along the route, not like what happened during the TNF Baguio run where I crossed the finished line with blood on both legs from a fall. (Read here.)

Though I was satisfied, I do wish to improve more but I know I need to commit to a stricter training regimen, - said that for the nth time though  :P.  How I admire those people who take time to train properly. 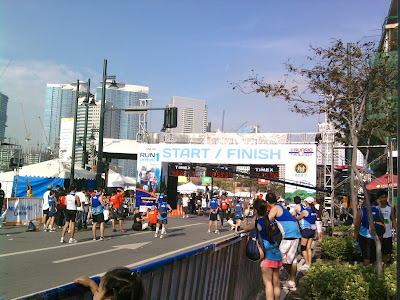 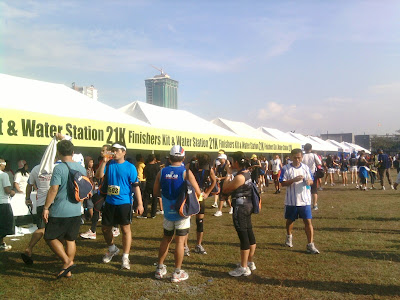 Everyone who finished 21 KM were given a finisher's medal. The most gratifying moment however, came as soon as me and  another friend walked out of the race venue and in to the nearest Starbucks for some bread and coffee. It was our post race appetizer. I love the Fruit and Nut toast paired with brewed coffee. If only I wasn’t so hungry, my day would have been made.

After Starbucks, we went to the nearest Chowking branch for some real comfort food, my favorite combo – Yang Chow with steamed siomai, chili sauce and a serving of Nai Cha tea – crushed ice. I salivate with delight as I started eating real breakfast.

After that nice meal, came dessert. We walked back to my friend’s place where we had the famed chocolate cake from Margie’s Kitchen in Butuan city.

We rested a bit, watched , had some girl talk and after two hours – got hungry again. We snacked on some steamed corn and the left-over bread from Starbucks. See, that’s what I love about sports. It speeds up your metabolism and makes you feel shamelessly hungry.

Our lazy post race routine continued until it was time for me to go home. Though I was in pain all-over (for the nth time, I’ve forgotten to do some cool down exercises), I felt happy.

Bonding with a friend over food is such a refreshing activity and if you get to engage into sports, that’s a huge plus.

Again, thank you to Nathan Sports Philippines for the free race kit!

Get updates on new products and other promotions on their fan page HERE.
Running