A Not so Lonely Solo Hike 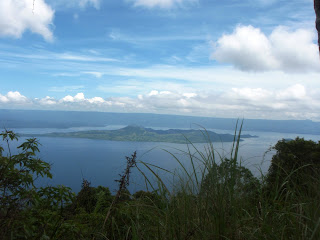 As part of my training for my first ultramarathon next weekend, I did a solo day hike in Mt. Maculot this morning. (Ahhh, there I've said it, my first ultra - I'm nervous about that! Please pray for me. I just want to finish within cut-off time which is 9 hours, with a huge smile on my face and if it's not too much to ask - heaping plates of siomai at the finish line. :P ). This mountain is located in Cuenca, Batangas and easily accessible from Manila both by public or private transportation.Though this is where I usually train with friends because of its proximity and steep terrains, it was my first time to go there alone.It was also my first time to get to the summit because we usually just spend our time up until the area popularly known as Rockies which has amaaaaazzzing views. It's really nice up there. You get to walk on top of boulders and from the cliff, see Taal Volcano, the beautiful serene lake and nearby areas in Batangas.
I also met a couple of new friends at the big campsite and I hiked with them to the summit which is on the opposite direction of Rockies. It would have been a lonely,  scary trek if I didn't go with them. I enjoyed their company very much and at the same time, got the training I needed. I learned something about birds and plants from them. Now, that's admirable! There weren't any views at the summit but the trail though slippery was very nice. We only had to face the sun for a couple of minutes because it was heavily forested and we saw a lot of interesting plants and insects. We also heard tons of birds.
I had to go down alone because my NFF's were still heading for the rockies after getting back from the summit. When I reached the jump-off, there were tons of other climbers and I had no space to sit down so I headed straight to the makeshift bathrooms at the back of the owner's lot. Fortunately, there was a vacant cubicle and so I was able to take a bath right away. I had to hurry though because I got the middle "cubicle" - with sheets of plastic as walls and there were 2 guys on both sides and since the walls were so thin and they were talking, it felt like they were with me in the same room!!! Hahahaha! I felt very paranoid but what the heck. It felt good to bathe after a hard day's trek. Hihi.
After packing up and saying good bye to the owner (geez, I keep forgetting her name), I was able to hail a tricycle quickly and rode another jeep to Lipa where I ate a solitary meal that involved the best food combo of all times - siomai and yang chow. It's my current fave post race/climb meal.
I got home before 6:00 PM and I can't believe that it was only a few hours ago that I was sweating profusely and trying to catch my breath.
Thank you God for keeping me safe and for the great experience and thank you  Gideon Lasco of Pinoy Mountaineer for making information readily available for everyone who wants to experience the Philippine mountains. (click on the link to get a copy of the itinerary). 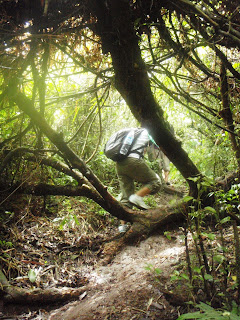