A Day Hike at Mt. Timbac

Posted by Jovial Wanderer on October 18, 2011
At approximately 2,717 MASL, Mt. Timbac is dubbed as the 3rd highest point in Luzon, next to Mt. Pulag and Tabayoc. It’s neither the height nor the thrill of summiting a towering peak that drew me on a solo adventure but the allure of  great views and the cold weather.  Well, I haven't climbed in weeks so any sight of greenery would have made me a happy hiker! :P
From Baguio,  I travelled 2.5 hours to KM. 55 in Atok, Benguet. According to Pinoy Mountaineer, it's the easier and shorter jump-off . The other one is at KM. 54 where you'll see lesser houses. The conductor insisted on dropping me off at KM. 55 and I agreed. I trust that he knows the place more.
I started hiking at 11:00 AM.  It was foggy and slightly drizzling as I ascended the concrete steps.  Air was blowing so  I hiked up the zipper of my jacket up to my chin. Brrr. The road was deserted. I was smiling  like a lil girl at the site of trees and mountainsides (as always!)  At the fork, I chose the high road to the left hoping it was the correct one. A couple of steps after, I saw a woman  in a house above the right side of the road and  asked. She nodded and stretched her hand forward. Yahoooo! 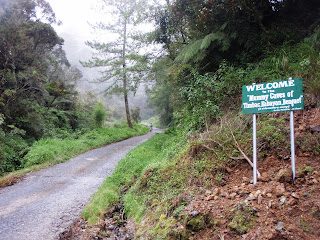 Shameless Plug : I'm glad I was finally able to use my loving hydration partner! Thank you Nathan Sports! I didn't have to struggle just to get a drink. 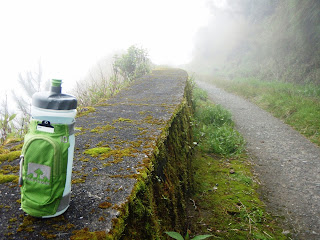 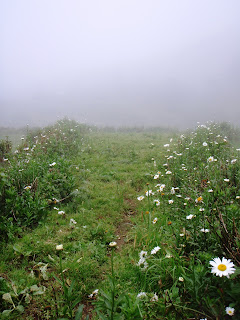 In less than an hour, I reached the Mongoto elementary school where I ran into adorable school kids. They had jackets and colorful boots,  their  cheeks  red from the cold. They are so cute!!! I gave them jellies which I brought from the Morning Star stopover which is a few kilometers  away from the jump-off. (This is also where you can grab a bite and buy some supplies before your hike.  You can get brewed coffee here for 15 Pesos. It's good!) 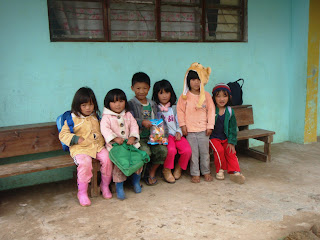 The kids pointed a  shortcut which  should lessen hiking time and before I started off,  I ran into a local guy and 2 kids and I followed them up  the mountain where their home was. Along the way, amidst intense efforts to catch my breath, my companion shared about himself.  He used to be in the army and was stationed in Mindanao where he survived an ambush by jumping into the mud with his comrades.  He told me, Muslims helped them and loaned their attires  so they can walk out safely.  Now that's a story.
The guy (and I'm sorry that I forgot his name) pointed the path I had to take and bade goodbye.  In  about 30 minutes, I finally saw the 3 crosses that marks the summit of  mt. Timbak, a few meters up. I didn't see the trail going to the summit so I tried to check other  paths. There were a couple but most of them led to the crops. I thought I finally saw one.  I started climbing up, when suddenly, two enormous rocks fell on one leg. Aww!!! I can already sense a huge bruise and some scratches.  I felt even more determined to reach the summit because I can already see it from where I was. So near!!!  I  retraced my steps and finally saw it. It was slightly obscured with overgrown grasses. I excitedly made my way up.
The summit was quiet, serene and foggy - just beautiful!!! There was no one else so I had plenty of time to ingest the view.  I wanted to stay longer but it started raining and it was becoming too cold so I had to go down. 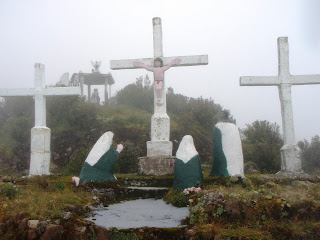 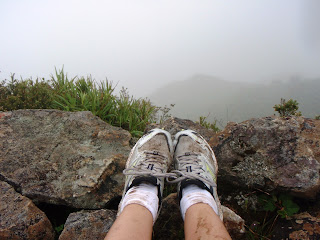 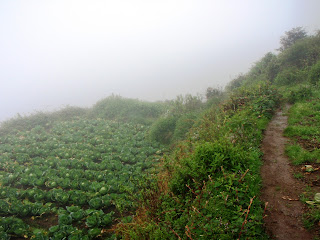 I checked my watch and saw that I had time to check out the mummies which is supposedly 30 minutes away from the school.  I was so excited, I missed a turn and  ended up walking for 45 minutes amidst a long and winding road, very reminiscent of the trail in Mt. Tapulao. My energy was depleting and found myself feeling sad and scared. Rain started pouring harder, fog was thickening  so I just tried to keep on going. When the drops of rain became lighter I texted a friend for some moral support. I decided to just head back down.  It's just not my time to see it.
I was able to make it out of the mountain around 4PM, drenched in a mixture of sweat, mud and rain. I barely had time to clean myself when I saw a van to Baguio. I got in and felt so embarrassed because I knew I stinked! The people were very courteous and no one made comments. I love you!  My clothes were still wet and I had to endure the 3 hour ride to Baguio where I stayed for the night to rest. The following day was another adventure!
Travel Notes:
Itinerary source - Pinoy Mountaineer
Please go through the comments to get more tips from other climbers. Thanks Gideon Lasco!
Expenses:
Bus Fare - Manila to Baguio via Victory Liner Pasay - 455 Pesos (One way)
Cab - Baguio to Dangwa Bus Station - 50 Pesos (you can actually walk going here if you know the way).
Bus Fare - Baguio to Kilometer 55, Dangwa Station - 81 Pesos
Van Back to Baguio - 100 Pesos
I always ride with Victory Liner because they have numerous trips and it's easy to get to the Pasay terminal from where I live.
Victory Liner Website
At the jump-off, there is no registration necessary but be reminded that you are just visiting. Do not leave any trash or make unnecessary noises especially when  you are in a group. Just a friendly reminder friends!
Going back to Baguio:
There are buses and vans back to Baguio which passes by the jump-off.
Be at the waiting shed by 6PM. The transportation to Baguio would be on the other side of the road.
Where to Stay in Mt. Timbac - you can actually sleep at a local's home. Just ask around.  Bringing something  to your hosts would be a nice gesture. :)
Where to Stay in Baguio:
If you are not that picky, you can opt to stay at Hotel 45 along Session Road - my fave choice due to its amazing location and that's about it :P.  It's a budget hotel so don't expect much. It's walking distance from SM, Baguio Cathedral, public market, Zola (a 24 hour bar and resto), plus other fave food spots like (Teahouse, Pizza Volante, Oh My Gulay)..hihi.. I miss Baguio already! 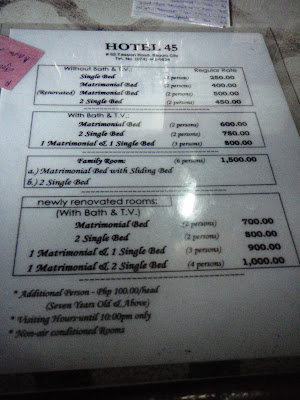