Posted by Jovial Wanderer on May 23, 2012
A few days ago, I Tweeted, "Great adventures are often those that were thought to be impossible and ridiculous. :)".

I was reminiscing happy memories of all the times I pursued a crazy idea and had the time of my life. For this post however, I won't blabber solely about my escapades. I've included the inspiring feats of old friends and acquaintances who stayed committed to their passion and with planning and sane precautions,  was able to fulfill a dream off their bucket list.

1. Family RTW Trip
Last year, a travel addict friend from college started touring the world with her adorable toddler and hubby. They've been to Australia,  Africa, around Asia and uh, wherever,  I lost tracked already.  :P

If you're wondering how they can afford it, all I can say is that they both work hard and their jobs give them the freedom to work from any place that has internet connection.

2.  Timbak-Akiki-Ambangeg- Weekend Hike
One of the many Filipino hikers I admire is Adonis Loren (Lagataw) who is known in the mountaineering circle for his extreme mountain hikes. I just met him in person this year and was delighted with how humble and personable he is.

Among Lagataw's adventures which have inspired me is his weekend hike to Timbak-Akiki-Ambangeg.

Timbak is Luzon's 3rd highest peak at 2,717 MASL  while Pulag is Luzon's highest at 2,922 MASL.  Mt. Timbak is normally hiked in a day while a traverse in Mt. Pulag from Akiki to Ambangeg is usually done within 3 days. He managed to cut two days off! :) Amazing!

Buzzy remains committed to his love for paddling through his business, Paddles and Laddles. If you want to kayak with him, just  message him on Facebook. I suggest trying out the Fireflies Kayaking for a surreal experience along Abatan River's mangroves. :)

Here's a post of a friend on his Fireflies Kayaking experience : Running Pinoy

4. Tapulao Day Hike
Mt. Tapulao is Zambales' highest peak. The trail normally takes a mentally excruciating 7-hour hike to its campsite. It will pass through a painfully rocky long and winding road, that's slightly inclined. The trail is merciless, exposed to the sun with not much view for the first 4-5 hours. Then another hour to get to the peak which is through a mossy forest.

In 2008, a day hike in Mt. Tapulao was a ridiculous idea. So when a friend suggested we do  a day hike, because he had plans to go biking the following day, I told him he's crazy and it was impossible. He was unnerved and so I thought, what the heck? I wanted to come back and enjoy this mountain anyway. Several days after that talk, we attempted a day hike. We started at 3:30 AM, got to the summit by lunch time and by 6:00 PM, we had gone back to the Barangay hall where we started our hike.

We got back to Manila at past 1:00 AM and we could barely get down the bus due to ailing knees. Needless to say, my friends cancelled their biking trip the following day. :p

Updated itinerary of a Tapulao day hike can be found at Pinoy Mountaineer. 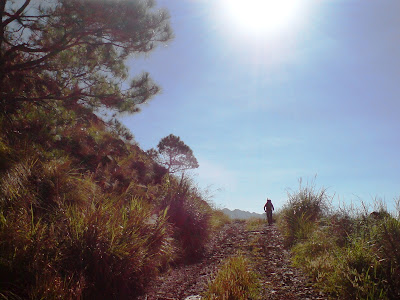 5.  Mt. Apo Day Hike
My friend Jules works with an NGO and she gets sent off to Mindanao all the time. While the free flights and side trips are fun, she's constantly on the move and always pressed for time. Despite her busy schedule, she fights hard to squeeze some time for her passion - sky running (running in a trail with a minimum altitude of 2,000 meters).

Mt. Apo, the Philippine's highest peak is at 2,956 MASL and is one of the few mountains in the Philippines where sky running is possible. When she came up with the idea of a day trip to Mt. Apo, it was met with objections coming from the people around her because a regular hike from the base to  the summit and back takes 2-3 days. There is a trail  known as the PNOC/Executive trail where a day hike is highly possible, but it would take weeks to secure a permit and she did not have enough time to process it because of her rigorous work schedule.

Given that she was taking a regular trail, no one was willing to guide her, and some of the people she  approached for help were hesitant, but she stuck with the plan and eventually found a local who was willing to take her up the mountain.  Finally, on August 14, 2011,  she started her ascent from Lake Agco, reached the peak of Mt. Apo and got down the same day.

Everywhere, I often hear or read about people who are able to fulfill even bigger dreams. I figured, everyone's created equal and if only we can commit and put in the same level of focus as these people have,  then these dreams  are just realities waiting to happen. :) Happy dreaming!