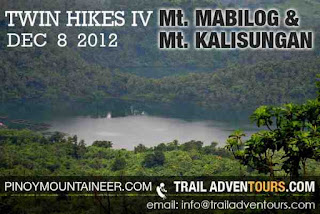 Over the weekend, I joined blogger friends,  Gideon (Pinoy Mountaineer) and (Ivan Lakwatsero) on an adventure dubbed as the Twin Day Hikes which entails hiking two different mountains on a single day. It was organized by Trail Adventours, a Filipino company specializing in bringing its clients to mountain trails; Gideon served as the guest team leader. This was actually its fourth installment, with the previous ones held over at Mt. Batulao & Mt. Talamitam (#1), Mt. Maculot & Mt. Manabu (#2), and Mt. Tagapo & Mt. Sembano (#3).

This time, we did Mt. Kalisungan in Calauan and Mt. Mabilog in San Pablo, both located in the province of Laguna.

Mt. Kalisungan (760+ MASL)- From what I was told by other hiker friends, the trail is steep all throughout. However, since our pace was relax and the ground was dry which made ascending easier, it turned out to be an easy hike, albeit a very humid one. I thought I was going to consume all my water. :P

The jump-off was at Barangay Lamot, across its barangall hall. After finishing a brief orientation conducted by Gideon Lasco, we reached the summit in less than 3 hours. An eerie landmark at the middle of the summit is a dug-up square hole. Rumors has it that it's the work of treasure hunters. From where we stood, it seemed as though the hole stretched endlessly but I dropped a rock over it and heard a sound bounced back, giving a gauge of the depth. It might just be around 15-20 feet.

On a happier note, the summit, though the sun's rays were in full force, offered great views. Gideon, eagerly shared the names of the mountains we saw. Oddly, I'm the type who enjoys the trails more than the summit itself and only half listened to what he said (sorry Gid!), so let me give you his description, straight off his blog. :) " directly in front of you, to the north, is Talim island with its Mt. Tagapo shaped like a young woman’s breast; you can also see Jalajala peninsula jutting into Laguna Lake like a ship, with Mt. Sembrano on its helm. Moving your eyes to east, the highlands of Caliraya appear. And once you reach the peak, you will be able to glimpse upon the seven lakes of San Pablo, flanked by Mt. Cristobal and Mt. Banahaw. Then, from a distance there is Mt. Makiling, to the west, completing the circle."

We stayed at the summit for about 30 minutes, then it was time to go to our next destination. Some of our companions had difficulty managing the steep descent from the mountain so we took twice as long to get down, but it's all good. :) I truly enjoyed the company of the new people we met, even got reunited with Jinkie of Baklay 123 who I met last year in Mt. Maculot. It was also nice to chat and laugh around Gid and Ivan who I don't ordinarily get to spend time with on regular days.


Mt. Mabilog (441+ MASL)- From Calauan, Laguna, we traveled in a van to Brgy. Sto. Angel in San Pablo City. The travel time allowed us to nap for a few minutes. I woke up, not really wanting to move but I haven't gone to Mt. Mabilog so there was no way I was skipping this one. This hike was also important to Ivan who was aiming to summit his 30th mountain on his first year of hiking. (Now, that's a cool feat! Congrats uli Ivan).

As it was already past 2:00 PM, we started hiking immediately to the jump-off to meet our guide. 15 minutes from where the vans were parked, we reached Lake Pandin which made me really happy because I haven't been to any of the 7 Lakes of San Pablo which the town is famous for. I've been curious about the picturesque Lake Pandin ever since I read an article on Rappler which was written by a fellow blogger, Izah Morales of Tripadora.com.  It looked even better than the image in my head. I have to go back and bring the rest of my family here. (Hi Karen! :P)

After a 10-minute lunch break, we started our hike. In less than 90 minutes from Lake Pandin, we reached the summit of Mt. Mabilog. From there, we saw the peak of Mt. Cristobal, one of my favorite mountains, and a view of the Lakes - Pandin and Yambo. We intended to enjoy the views a bit longer but it started to rain so we rushed back to Lake Pandin.


Post climb dinner came in at past 8:00 PM at Clydenjosh (CDJ) Restaurant across Sampaloc Lake. CDJ offers delicious Filipino dishes at reasonable rates (around 200 Pesos/dish which is good for 3 persons). There was supposed to be an awesome view of the lake but as it was already late in the evening, we could only imagine. :P

While waiting for the food to be served, I slipped into a hazy state of consciousness - a mix of fatigue and hunger. Deep, deep, deep down though, I was happy - with all that hiking and the excellent company I was with. When food was served, everyone stopped their lively chatter to devour the spread. The food was great and even if I was really tired and hungry, it wasn't enough to numb my taste buds. The chicken barbeque was juicy, the Tuna belly sinigang had the right amount of delectable sourness and my happy drink -  a nice strong cup of brewed coffee succeeded in bringing my senses back to reality.

Again, thank you Gideon Lasco, Coby Sarreal, adventure guides Ryan Tuiza, Mikhail Gomez and to the rest of the Trail Adventours Team for this happy adventure. :) Til the next one!