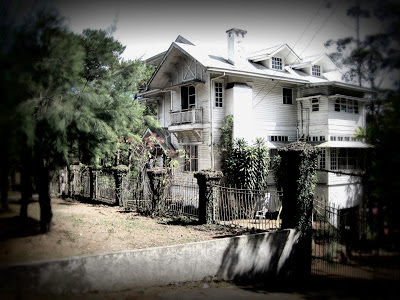 With its exteriors painted in white, the house that withstood World War II at Leonard Wood Road is believed to be haunted. Built in the 1920's, it was originally owned by the Laperal clan, one of the most prominent families in Baguio at that time. It was purchased in 2007 by business magnate Lucio Tan, but he only goes here for brief visits. In fact, I was told that he was just here a few days back.

As it's considered a private property, it is usually closed to visitors. However, due to the bamboo exhibit which is targeted to run until March 2013, its decades-old doors have been opened to curious travelers dying to peak what's inside one of Baguio's famous eerie structures.

During the war, the house was turned into a headquarters of the Japanese imperial army. It was around this time when the people who occupied the house were murdered. Based from what I have read, it has not been established whether the occupants were killed by the Japanese or another group.

Similar to Teacher's Camp, which is just a few blocks away, many stories have circulated around the web and among the locals regarding ghost sightings and hair-raising experiences inside the house. Some of which involves a child standing at the front porch, a woman standing by the 3rd floor window and caretakers unable to breath when they try to sleep inside the house. It has also been the subject of a documentary by GMA 7 (Watch here).

Alone, I went inside its gates bursting with a happy and excited energy. It was my first time inside the house and incidentally, I also get to see some bamboo art! The caretaker stayed by the door near the porch. Unfortunately, the two, very much human visitors I saw was just leaving as I came in.

The bamboo exhibit was at the dining area on the first floor. It features an impressive collection of the works of bamboo carvers from Asin in Tuba, Benguet. I was amazed at the intricate details of each piece which used treated Kawayang Tinik, a variety of bamboo sourced from Porac, Pampanga.

I was still in a cheery mood as I approached the staircase. It took a few minutes for me to shut down the freaky thoughts boiling inside my head, taking slow steps as I walked inside one of the rooms that attracted my attention. It was huge, very spacious and has its own fireplace. Apart from the bed, there were no other furnitures or other fixtures in it. I stayed for a few minutes at the second floor mainly because I was enamored with its design. It has high ceilings giving it an airy feel! :) 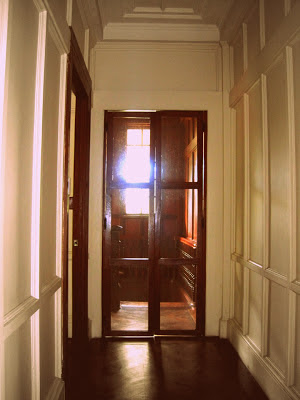 Having experienced several supernatural encounters in the past, I have acknowledged the existence of what was beyond normal but I am thankful that for this instance, I able to walk out of the house with no negative energy lingering in me or other beings following me home, which was experienced by a previous visitor (read here). I did not sense any eerie vibes. I felt light and very much invited except for the area near a narrow staircase leading to the 3rd floor. It was not open for viewing anyway.