Posted by Jovial Wanderer on January 02, 2013
Though I keep on meeting a lot of new and awesome people, I have not forgotten trusted and reliable hiking buddies from way, way back. Personal goals and new priorities may have affected the amount of time we spend together but we make it a point to keep in touch or in this case, go out for a hike at least once a year.

A day before our trip, Tan, former schoolmate and hiking buddy from 2008, agreed to check out Mt. Lobo in Batangas. I coordinated with our guide, Jay Bondoc who was a bit surprised with the short notice but accommodated us anyway. :) (Contact Number at the Travel Notes section below)

The following morning, two more friends joined us, Dan and Abet. We met at Jollibee along LRT-Buendia so we can grab some breakfast before the trip. We boarded the first "Batangas Pier bound" bus (125 Pesos) we saw right outside Jollibee which was a mistake. The driver seemed inexperienced driving under the rain and we moved so slowly that majority of the buses and other vehicles traveling at the Star Tollway just breezed past us.

Travel to the Grand Terminal in Batangas took two hours. (Note : A more efficient route from LRT-Buendia would be to board a bus straight to Balagtas. We weren't able to verify which bus company but you can check Ceres Transport, terminal's also near the LRT Gil Puyat Station.) From the Grand Terminal, we took a jeep to Balagtas (13 Pesos). Here, you can use the restrooms or buy some refreshments. From Balagtas, we took another jeep (8 Pesos) to the Lobo terminal where we boarded another jeep to the town proper (53 Pesos). A tricycle took us to the jump-off at Sitio Curba, Barangay Nagtaluntong (70 Pesos/4 Persons). Whew!

We met with our guide Jay at the army detachment where we also registered. No fees had to be paid. By 10:24 AM, we crossed our first river. Water level reached the top of our ankles:P. 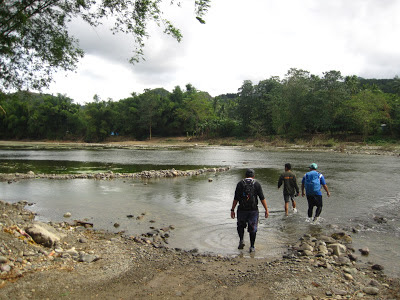 First hour of the trail was through a farming community where we saw a relaxing view of hills and rice fields. The terrain was practically flat, though slightly muddy and rocky on some parts. After 90 minutes of hiking, we reached Katiting falls which couldn't be more than 10 feet tall. Its waters gush into a deep but narrow pool. 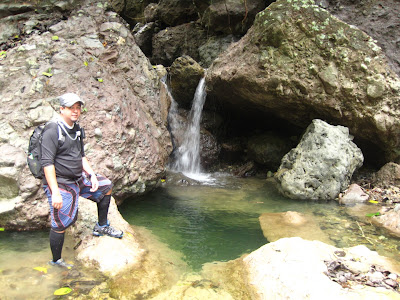 After the falls, trail started sloping up and down, passing in the middle of a forest. The merrymaking sound of birds could be heard and various species of trees, some are fruit-bearing can be seen as we moved further up. There were not much steep ascents however, terrain was quite muddy and slippery. 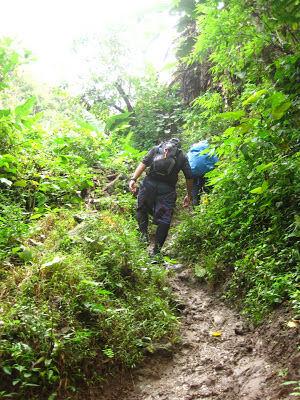 Each step becomes heavier than the next one as our shoes accumulated more dirt. But it was hard to be annoyed with this amusing trail that made me feel as though I'm in an enchanted place. We crossed several more streams and midway our hike, I glanced at my watch and figured we couldn't make it to the summit in time for the last jeepney ride back to Balagtas which was at 5:00 PM. Two of my friends have families of their own and there was no way we can spend the night at Lobo, but I was too enamored with the scenic trail that featured different plants and trees to feel disappointed. 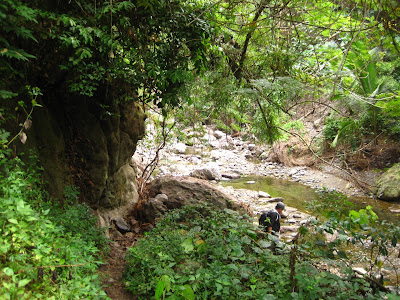 We made it to this hut, a popular resting place for hikers where you can also request for lunch in advance. We consoled ourselves with coconut juice that was just picked from a tree, just a few minutes ago. The summit of Mt. Lobo can be seen from where we sat and we can only laugh at ourselves for traveling this far for a drink of coconut juice,. The peak seemed so near yet we were still two hours away! Oh well, we are meant to come back some other time.

Travel Notes :
- After your hike, you can wash up at one of the homes near the army detachment. Just ask  your guide.
- Remember to take note of the last trip back to Balagtas. As of December 2012, last jeep from Lobo to Balagtas is at 5:00 PM, next one is at 2:00 AM). From Batangas City, you also need to check out the last bus back to Manila. We couldn't help but wish we brought a car instead so we could have started earlier. You can leave it near the jump-off.
- A more detailed itinerary can be found at the ever-reliable Pinoy Mountaineer site. :) Here you can see that the ideal departure time from Manila is at 4:00 AM.
- Guide : Jay - +639357851477 (new number as of April 2013)
Rate : 500 Pesos for two PAX, add some extra if more than 2