Posted by Jovial Wanderer on August 21, 2013
Strapped helplessly on a harness being lowered with a pulley in  a 20 feet steel cage, I let out bouts of panicky high-pitched screams. I didn't care that I'm 31 and with muscles  on the wrong places that makes me look that I wouldn't bat an eyelash if a knife was pointed at my throat,  I felt extremely afraid. My heart revolted against my chest and in seconds, my shirt was drenched with sweat. I was about to cry but the supposedly mature side of my head took over and I found myself, releasing several more piercing screams instead.
A few meters above me, I hear the sound of sheer enjoyment that came from friends who were fully aware that I suffer from acrophobia. 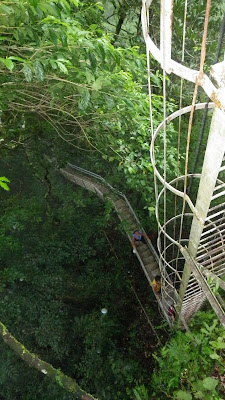 My dear old,  "trust them with my life" kind of hiker friends who told me we were just going on a relaxing road trip and a visit to Pagsanjan Falls, which in my mind, (since I've never gone there), involved lazing on a boat and taking tons of landscape shots and group pictures.

I managed to calm down before I reached the ground. But of course, I had to release my woes to someone. One of my best friends, Jules, who I've known for more than a decade was the first brave person to go down after me. In a calm, soothing, sisterly voice, she asked if I was okay.  I threw back a betrayed look and several accusing remarks, which only a true friend can tolerate and knows does not come from a hateful place but one that springs from over familiarity.  She understood exactly how I felt and how to appease me, like the true friend that she is.
Fear and anger dissipated as soon as the rest of my friends got down. I  soon found myself laughing again with them.  (Thanks to friends who knows how to push the right buttons and how much to push it.) It was also hard to retain ill feelings when you're surrounded by thick beautiful foliage. The weather was cool and I'm thankful for the giant tree trunks that shielded us from the wind. 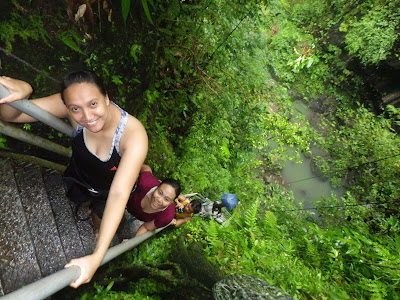 After a 45-minute walk on a steep, winding set of metal stairs and another round of rappelling, we reached the base of one of the famous tourist spots in the Philippines, Pagsanjan Falls. Around 90 meters tall, it was named after its popular jump-off in the municipality of Pagsanjan. It's actual location however is in Cavinti, another municipality, 18.4 kilometers away via the  scenic Lumban-Caliraya-Cavinti Road.
Sweaty and a little breathless from the hike, I madly took in our surroundings. The gorge where we emerged revealed enormous boulders along the river and as backdrop, a heavily forested mountain encroached with various species of trees. The cloudy skies highlighted the rich hues of greenery around us. Civilization felt like millions of miles away. 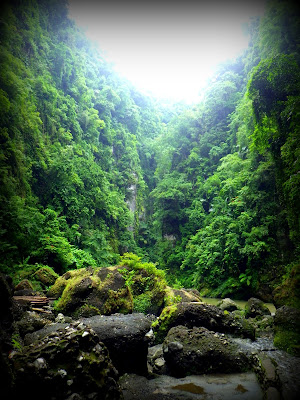 We were quickly ushered into a bamboo raft by local boatmen and joined by a big group of Korean tourists who came in colorful pink and green boats from Pagsanjan.

The monstrous roar of the water was exhilarating and as we approached the  area under the falls  we all clung to the rope tied over the raft to avoid from being washed away. Everyone screamed with excitement.

We were led towards a rock formation at the back of the falls where we took turns having our pictures taken by the friendly boatmen.
Everyone got so pumped up, I almost forgot that making our way back would be a little more challenging as we now have to lug all that body weight up on a vertical trail but this time, the scary steep views would be on our backs. It doesn't lessen my fear of falling though.
I was happy when our guides decided to use a nature trail (after two more rounds of rappelling and some stairs climbing), supposedly a short cut that led directly to the parking lot. It was steep and slippery but being avid hikers, it was one that we were much more comfortable to tread.

We capped our quick waterfalls adventure by bathing at Bumbungan Eco Park, a few minutes away from the entrance of Pueblo El Salvador, the primary jump-off to Pagsanjan Falls.
Here, our need for quiet, relaxing time was fulfilled finally. :)