Posted by Jovial Wanderer on August 02, 2013
The Teva Trail Challenge held last July 28, 2013 at Eartheaven in San Mateo, Rizal was by far, the muddiest, technically challenging but most fun non-ultra race course I've ever joined.

In this promotional outdoor activity by the friendly folks at Teva, an outdoor footwear brand,  participants had to run on slippery, steep terrain and pass through several obstacle courses.

I joined the 10K division as part of the bloggers team, reuniting with blogger friends Dom, CJ & Dhenz, even met a couple of smiley new ones too, Louie, Cheryl  and Thirdy.

First part was a kilometer of road which towards the end of the stretch revealed views of Makati, Ortigas and Pasig. 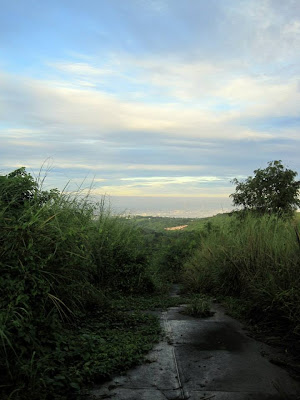 Then came the muddy trails where several ropes were installed to protect the runners. I felt bad for those who came in road running shoes, the trail was too slippery for them. The route became a little congested too on some parts as it was obvious that some of those who joined have never been in a forest trail and had difficulty positioning their foot. Still, I never heard anyone complain. Everyone was having fun despite the challenging terrain, at least, it's true for most of the people I came across .  :) 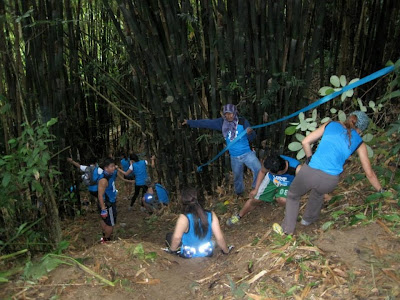 First obstacle was to climb a wall using a rope ladder.  It’s probably just fifteen feet high, but with my fear of heights, I couldn't help but feel nervous as I made my way up.

The second obstacle was the coolest. Cutting the route was a mud pit which we had to cross by selecting one of the 3 options to get to the other side, either via the monkey bridge, a rope bridge or a rope swing.

I chose the funnest option which was  the rope swing. I thought it would be an easy challenge. Swinging as hard as I can, I reached the middle portion of the mud pit, felt my hands slipped from the rope and crashed into the murky water. FAIL! It was fun though. I laughed so hard as I struggled to regain my composure. The photographers laughed with me too. :P I must have looked so silly with my game face on and mud all over me.  :P

Then, we had to go under a bridge on the river towards the falls. I'm not very fond of trails leading to a waterfall because it tends to be too rocky and slippery. Still, water cascading down the boulders was a pretty sight.  Lots of marshals were along this portion of the route as it seemed to be the most dangerous part.

The rest of the way involved serious uphills leading to a peak that had a gorgeous view showing some portions of Rizal.  I wished my camera was still working when we passed it.

A few minutes before we crossed the finish line, we had to undergo one final challenge using a rope swing to get to the other side. Again, I fell into a mud pit. This time,  mud clung everywhere and my friend and I finished the course, dirty but proud.

I clocked in at 3:13, the slowest finish I've ever had in a 10K trail running event but it's one that I am very much happy about. The obstacle courses and  the route itself was a reward on its own and just completing the entire thing was an achievement. Of course, the loot bags, raffles, interactive product booths promoting Teva's latest footwear models were a much-appreciated plus. :)

Congratulations to all the organizers and participants! :)

Thanks to Ian of the Primer Group of Companies (Teva's distributor here in the Philippines) for the invite. :)