Posted by Jovial Wanderer on November 27, 2015
One of the nicest things about having long time, reliable hiker friends  is that you can just drop your original plans and go on a spontaneous trip somewhere else! :P
To cut a long story short, Tristan, one of my oldest friends got held up at work and by the time he arrived at our meeting place, I already had reservations about our original plan, which is to hike Mt. Sembrano in Rizal as it was already late and there might not be enough time to get back home on the same day.

After agreeing to change plans, we got his car in Paranaque and headed off to Mt. Batulao, a mountain in Nasugbu, Batangas, which we often hike. We were already on the road towards SLEX, when I remembered Mt. Apayang, a neighbor peak of Mt. Talamitam, also located in Nasugbu. This new hiking destination opened in August 2015 and features a thick forest trail. Prior to its opening, some hikers would combine a hike to Mt. Batulao and Talamitam in a day. I find it nice that there's now an option to do 3 to maximize your travel to Batangas.  :)

I found a very helpful blog post on the web that had all the information we needed and quickly got in touch with our guide, JP Dimapilis.

Normally, hikers do a traverse, starting from Apayang, then to Talamitam since these mountains are less than 30 minutes away from each other.  But, as it was past 3:00 PM already, we decided to start from Talamitam's jump-off at KM 83 in Sitio Bayabasan, Brgy. Aga. From here, there is also a  trail  up Apayang. This is also where we met up with JP. I noticed, the registration area has moved to a closer spot, just along Nasugbu-Tagaytay highway where public buses pass by. After registering and paying the fees (20 Pesos each for Mt. Apayang and another 20 Pesos for Mt. Talamitam), we started off our hike at 3:40 PM.

I haven't visited Mt. Talamitam in years and it was great to see that the bamboo bridge is fixed. It moved up and down as we walked on it, making the cross very exciting.
After this bridge, trail becomes a little steep. There is some forest cover on this side, but past this is an enormous area of grassland that's a nightmare to walk  under the heat of the sun.

Since it was late in the afternoon, the heat was easier to bear and I actually had a great time especially since we saw several horses and cows along the way. It felt awesome to be hiking in the mountains again after a 3-month hiatus. :) 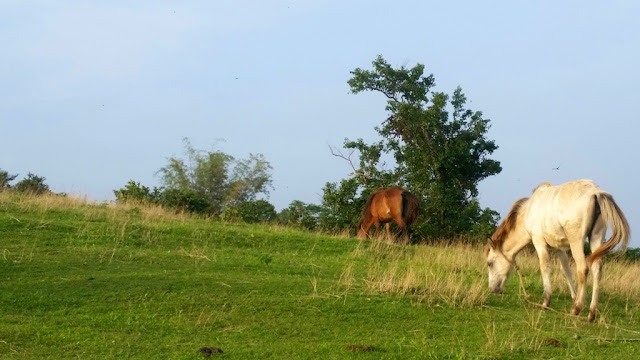 Our guide is commendable. He is not only friendly and chatty, he  is very considerate, often checks up on us if we're fine with the pace and also shares information about the mountains.
It was getting close to sunset so we headed to the summit of Mt. Apayang  first while there was natural light so we can see the view. Facing Mt. Talamitam, we took an denser trail on the left. The  grasses were taller than all 4'11 of me and I ended with a lot of grass cuts but I was enjoying too much from seeing a lot of green everywhere, the pain was negligible. :P

Nearly two hours after starting our trek, we finally reached the summit of Mt. Apayang, silhouette view of nearby peaks welcomed us. I read that when sky is clearer,  you can also see the peaks of Maragondon mountain range in Cavite.

There is an open hut at the summit, a very good spot to sit and enjoy the breeze.

After resting, we headed over to Mt. Talamitam which is less than 30 minutes away. It was very dark when to got to the summit so instead of stopping, we headed back down right away. By 7;00 PM, we were back at the jump-off.

09057849830/09304840925 - John Paul (if you're traversing from Talamitam to Apayang)
09169336608 - Sir Juancho (if you're starting from Mataas na Pulo, Apayang's jump-off)
09065763787 - Sir Isagani Botabora (for tree planting activities)
Guide Fee : 500 Pesos (if doing the traverse), 300-400 (one mountain); Guides are required in Talamitam but you can negotiate. :)
Registration Fee : 20 Pesos per mountain
*Parking fee is free
Where to wash up after the climb? There is a clean restroom near the registration area where you have to pay a small fee (I forgot how much but it's no more than 20 Pesos)
For bigger groups, just check with the locals.
Where to eat after a climb? Tagaytay, which you will pass on your way to Talamitam has a lot of options. My favorites are Bag of Beans (there's 3 along Tagaytay-Nasugbu highway), Mahogany Market, Green Ats (where there's a very good view of Taal volcano) and Kenny Rogers at Sky Ranch (they have super friendly staff!).
For other information that's not on this blog, please visit this very helpful post from Dencio Travel
Notes :
- as of last visit (October 2015), camping is not allowed in Mt. Apayang. Please verify with the numbers posted above before making plans.