Posted by Jovial Wanderer on December 01, 2008
The past three days has been a mixture of events that brought fun and body pains to myself and my activity buds. 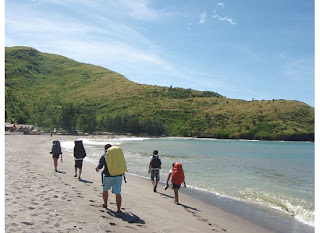 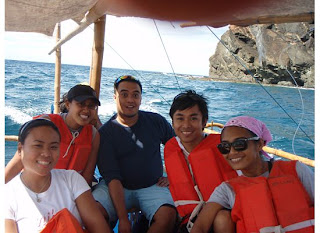 Me and the rest of my backpacking group (with the exception of Oli , Gay, Olay) – ECOF celebrated our first anniversary in Anawangin Cove. There was another important reason behind the trip but I can’t share what it is because it’s not my tale to tell. The bad part was since we chose to go frolicking in a remote island with no cellphone signal, we had to miss an important annual event – Alan’s birthday party (Sorry Alan..sorry Pat!). Alan is my friend from college and I’ve known him for about 12 years. I thank God he was quite understanding about the whole thing but I still feel guilty about it. I am currently racking my brain on how to make up for what I missed. 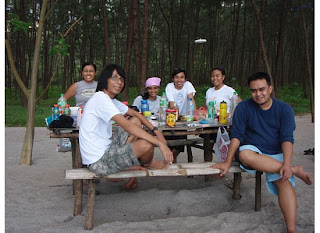 Anyway, back to my Anawangin tale…on my 7th time there, I saw some changes over the place – two of those, I am half-happy about:

1. There are some ice cream vendors in the area. It’s just so weird hearing the ice cream man’s bell in the place! It used to be just the wind and the ocean! On the other hand, I am glad that these people can earn additional income because Anawangin Cove is pretty packed on weekends. Hay..bitter sweet… 2. I almost had my breath knocked off because I saw some guy selling souveneirs! That is so Puerto Galera! What they do is they hop on a boat from the Pundakit shore where all the resorts are and catch a ride back if there’s a vacant boat. I don’t blame them because they are just trying to earn a living in a decent manner. Oh well…at least the place is still clean- at least on that side which is owned by a certain Mr. Aguilar. They charge 100 pesos/head (another positive change because they used to charge 150 pesos/head) and they now issue an official receipt.

Now, comes the fun part of my story…bouldering! I wouldn’t recommend it because we nearly had two casualties and none of us are trained...It was quite irresponsible..but when you’re young, OCCASSIONALLY, the prospect of death and pain in exchange for adventure is appealing. There are boulders in that area where one misstep will send you crashing about 20 feet towards a rocky shore with strong waves. That’s where we went and climbed. It was exhilarating especially since I’m acrophobic. Everyone got down safe and thrilled and I prayed to the Lord after that. We had to swim back to shore though so it felt like a duathlon thing. I also realized that I got to learn more about bouldering because it seems like a great sport. I’m a natural at it but I need to know how to do it right. 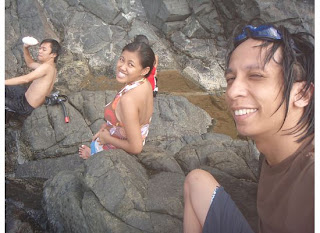 Body Slamming Against the Waves

It’s the season for surfing and the waves in Anawangin brought delight to those with skim boards. We encountered nice waves..I’m not a surfer or anything like that …I just enjoy riding the waves using my body. It seems more fun that way but I do want to experience surfing, at least maybe once. The crazy thing we did was slam our bodies against the waves in 3 feet of water. It seems foolish but it was really fun. All of us scratched our heads after that thinking what came over us to do such a thing because it brought us body pains. 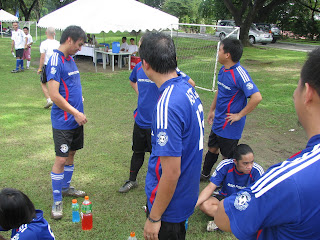 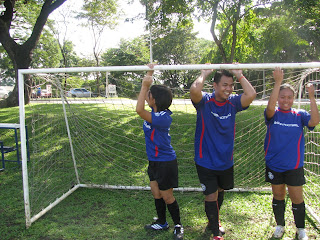 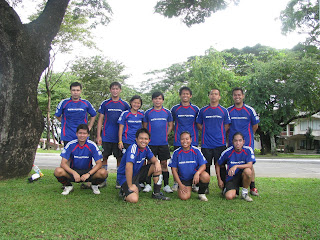 I can’t believe I was finally able to play after several moths of anticipating. It was supposed to be held last Nov. 16 (on the day of my flight to CDO) but something came up and it was moved to December 1 when I can finally play!

It was a one day league held at the Ateneo field 2 in Katipunan. Our team played a total of four games before finally succumbing against team KPT on the battle for third place. Our team played a great game and at the end, we were all proud of our efforts.

It was a day of reuniting with my first love – football, and a day of laughing with my teammates. I love my team and I am proud of them because everyone are decent footballers but I’m afraid this may be our last tournament together since most of them are moving into another company. Oh well, we can always text and play somewhere else with a field. Sykes also sponsored all food and beverages so it was like a picnic tournament. There was so much food! I love it!

I saw so many great players and a lot of cute guys since it was mixed gender tournament. Hehehe! There was also a lot of body contact involved and some guy who’s about 5’10 ft accidentally grabbed my left breast and sent me hurling into the muddy grass as he turned to avoid my tackles because I was defending our goal. I was deeply focused on the game and I knew it was an accident so I chose not to be bothered by the incident.

I also realized that I should perhaps consider switching into another sport like wrestling because I really love slamming people into the ground. In one particular game, I slammed 3 guys into the ground in a span of 15 minutes..thank God they all understood the body language of football or I would have gone home with a blackeye. I incurred no penalties this year ..yipee! All my body slamming were appropriately done..hehehe!

Now I am home and my body is in pain. I haven’t taken a bath and my hair is sticky from sweating but I’m feeling too lazy to take a bath. Surprisingly, I feel happy because I knew our team fought well in the tournament.