Posted by Jovial Wanderer on August 18, 2009
Weeks before my trip, I typed these keywords in Google – “Mountains in Singapore”. The results led me to Bukit Timah – a hill measuring 163.63 meters or 537 feet which is the highest point in the entire Singapore. I smirked at its  size but at least it’s higher than the highest hill in Chocolate Hills which is just 120 meters. I did a virtual tour in the internet and was instantly attracted to it. It looks like a nice park with hiking trails. I quickly sent an instant message to my friend and begged (actually, more like, ordered) for them to take me to Bukit Timah.

The sun was hiding when we went down at the Upper Bukit Timah Road via a public bus. With me were four of my other friends, one of them was Norman who used to do a lot of hiking back in the Philippines. Prior to my arrival in Singapore, I told him I wanted to visit this hill and judging from the way he laughed, I knew he thought the same thing as I did – this was going to be a no sweat hike. However, I did packed an extra shirt before we set off– a used shirt from the previous day. I figured I probably won’t need it anyway.

Fernan took the lead in navigating our way towards the entrance of Bukit Timah Nature Reserve and while trying to find the main entrance, we spotted two other hikers coming down the road, obviously just came out of the reserve and they looked like they had a tough time. Their faces were red and their hair, disheveled.

I gulped and glanced at Norman. It did not seem like a no sweat hike at all.

We walked for about a few more meters and by the time we reached the entrance, we were already hot and sweaty because it was a bit humid.

We immediately saw the reception hall and felt glad because they don’t charge you any entrance fees. How nice! For a while, we got a little confused as where to go but we saw a big map mounted on a wooden board near the reception and we just chose the path leading to the quarry which was on a separate trail from the summit. We figured we’d do the summit after that. We thought, we can manage to trek some more since 163.63 meters does not sound very challenging. After having our pictures taken at the huge boulder, we set off to a cemented path and I gulped. Lurking from a distance was a very, very, very steep cemented road. 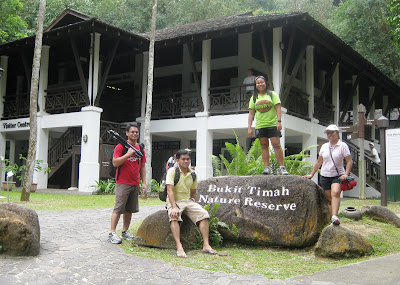 After walking for a few seconds, everyone was sweating profusely . To think I almost didn’t bring any extra shirt for changing. Thank God that we had bought drinks from this vendo machine we saw along the way before we crossed the road to the park . I only got 330ML of flavored water and panicked, I didn’t think it would be enough.

Though the road we walked on was modern, both sides were filled with different species of trees. The notable ones were marked with signs to identify them.

We also saw some monkeys playing on the trees. After about 30 minutes of walking on the paved road, we hit a dead end. No view of the quarry, just a tiresome site of the modern world. There was a big structure of some sort where we were supposed to see the quarry. Disappointed, we then back tracked and set off for the summit trail. We broke off from the cemented path after climbing a few more stairs. After emitting several gallons of sweat, we finally reached the summit and took pictures. There wasn’t much to see in there, just a nice big boulder and some more interesting trees. I gulped down the flavored water I bought and felt dismayed for not bringing more. I then remembered that I only brought a used shirt and I wasn’t looking forward into wearing it as I had already worn it previously for about 10 hours or so. 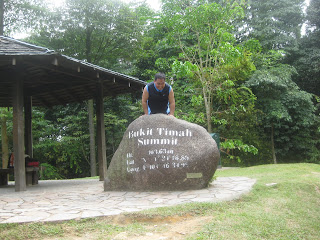 After going down the summit, we saw another board with a map and we decided to search for the place where we can see a view of the quarry. This is where the trail got more interesting as we now hiked inside the forest. The trails are clean and easy to spot so you’d have to be extremely foolish to get lost in there. The terrain, wasn’t so difficult, but no so easy either. I was feeling excited to see something new but then my unfit muscles were beginning to complain. I seriously began craving for a nice decent meal after our hike. 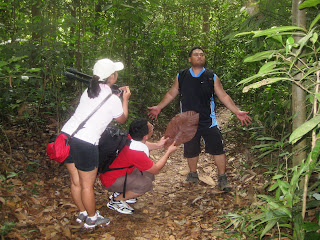 We were a little disappointed when we reached the quarry view. It was severely obstructed by trees so the naughty part in us went a little off trail, nearer to the cliffs to take pictures. After risking our safety, we went back to the trail. An hour of steep trails after, we finally got to the main entrance. 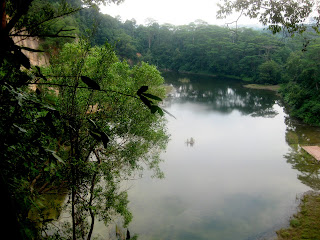 We capped of the day with dinner near the Raffle’s train station where we met with two other former colleagues. It’s a huge food court – similar to the outdoor food court in Market Market. I felt so bloated after gorging on a generous serving of pineapple fried rice with shrimps. We did a lot of walking after dinner, ending up at Singapore's most distinctive landmark, the Merlion, where my friends mercilessly took pictures of me with it. :P

How to Get to Bukit Timah Nature Reserve:

By Bus
SBS service 170. TIBs services 67, 75, 171, 173, 184, 852 and 961.
Alight along Upper Bukit Timah Road, opposite Bukit Timah Shopping Centre and Beauty World Centre, or along Jalan Anak Bukit, opposite Courts furniture store, and walk to the end of Hindhede Drive.

By Car
Travelling from the city, follow the direction of Upper Bukit Timah Road towards Woodlands, make a u-turn just after the Courts furniture store and turn left into Hindhede Drive. Limited parking is available at the foothill of the reserve. To minimise our impact to the reserve, especially on weekends, you may like to take the public transport instead.