A Rock Climbing Mishap in Rizal

Posted by Jovial Wanderer on August 17, 2009
I’m physically in a lot of pain. My upper left calf was stitched this morning, my back feels sore and my right knee feels strained because I had been walking with most of the force on just one leg because of my wound. The anesthesia has worn off and it’s quite hard for me to move. I feel happy though. I’m still alive and my right leg is still functional. :P

At past 9am yesterday, me and three other friends from our office outdoor group met with Marc Gana, a contact from Multiply. He had organized a Rock Climbing 101 clinic in Wawa, in the municipality of Rodriguez (formely known as Montalban), province of Rizal. I have long been curious about Wawa Dam and the Montalban Gorge which was near the rock climbing site so I really wanted to go. I saw pictures of the place months ago, also through Multiply and the amusing mountains and river streams had stirred my curiosity.
We were joined by two new acquaintances – Luke and Imee.

We boarded an airconditioned public FX (45 pesos) at the terminal near Jollibee in Araneta Center Cubao at a little before 11am. Supposedly, we were supposed to go down near Avilon Zoo in Rodriguez (still known by its old name – Montalban) and board another jeepney but the driver had agreed to drop us straight to Wawa for an additional 100 pesos for the whole group.

The travel time from Cubao to Wawa took about 90 minutes. At the jump-off, we made a short stop to purchase food and taho. There are several eateries and stores there where you can buy stuff. Less than 10 minutes from the jump-off was a view of the Montalban Gorge – one of the main reasons why I wanted to go here. I marveled at the mountains like a little girl. It was how I imagined it would look like. As usual, I kept saying my usual, “Wow!” and “Whoa” as we made our way down this hanging bridge. It was an amazing  sight. We passed a community and hiked for another 20 minutes towards the rock climbing site. 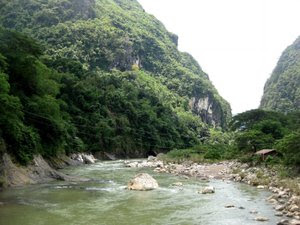 Sir Marc began with a short lecture about the gears that we were going to use for the climb. We learned about the different types of rope – like the static, kern rope and dynamic. For our climb, we used the dynamic rope which is elastic. He also introduced us to harnesses, carabiners, belay device and the chalk bag. He also explained how to care for the carabiners and the rope. Though these devices were not new to most of us, the prospect of using these for an actual rock climbing thrilled us. 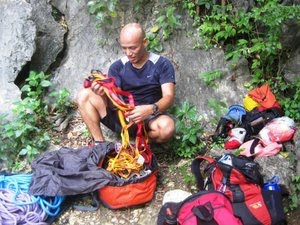 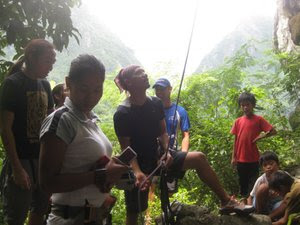 After the lecture, Luke went ahead first, then Rhovee. Both had difficulty at the crux – which is a rock climber's term for the most difficult part of the boulder. When you’re down there and looking up at the climber, you’d think it was easy. Rhovee took almost an hour to scale a 50-meter rock while Luke took about 45 minutes. Rhovee’s like one of the strongest ones in our group. 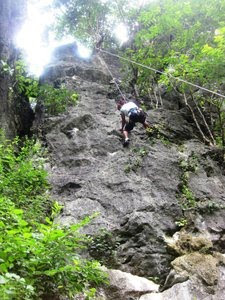 Falling!
I was the third one to go and when I set off, mild precipitation began falling from the sky. The first few meters were not so bad. It was hard but manageable. By the time I reached the crux part, I began to feel tired and the rain poured much harder. What a welcome treat for me. Wah! I had already climbed about 40 meters and was almost at the marker. I was having difficulty because I wasn’t that agile and my upper body isn’t that strong. My flabs were also working against me. Mother nature seemed to be playing a trick on me as I was already soaked to the bone and I was having difficulty seeing because the rain got to my eyes. I felt a little scared because it felt really high. I tried to ignore it and focused. I was already having trouble clinging to the rocks and questioned myself for the nth time why I often put myself in such difficult situations where I could just be sitting in a couch somewhere, laughing with friends.

For several seconds, I couldn’t move from where I was. My muscles felt tired and I was trying to find little rocks to grip. I  refused to give up and clung to the rocks with all my might. I had been hanging on to a rock for several seconds (felt like hours!), straining my arms when my hands slipped. Everything happened so quickly, I just remembered screaming and swinging to the other side of the boulder. I hit a jagged part which didn’t hurt that much but when I glanced at my left leg, I saw a lot of blood gushing down. At first I thought it was just a small wound. Upon closer inspection, I realized that my skin was torn off and I could see some white stuff oozing  out.

I was both amused and mortified at the same time. I only felt faint for a few seconds and then my presence of mind took over. I have never seen far beyond the outermost layer of my skin so this one was new to me. I rested for several seconds at the branch of this comforting tree and yelled to everyone that I was okay.  It didn’t take more than a few seconds for me to decide to go down because there was just too much blood. I left a blood trail as I rappelled down the boulder.

It was a great thing that both Mils and JZ brought their first aid kit and that one of the participants – Imee was a registered nurse. She and Rhovee helped clean my cut and wrapped it with gauze. I sat on the mud for the entire duration of the rock climbing activity. It was still fun though as I was in the company of great friends and great new acquaintances. Everyone was thoughtful and kept asking me if I was okay. I just took some pictures from where I was sitting and waited patiently until everyone finished their turn. 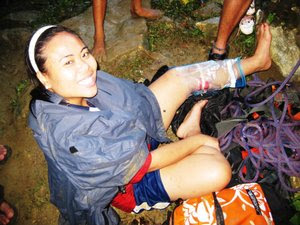 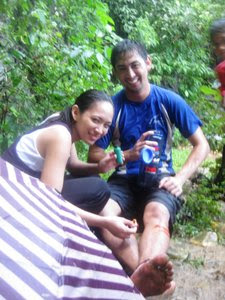 Casualty #2 - hit the same rock I did

We finished at around 6:00PM and hiking down from the site proved to be a challenge for me as I could only use one leg for walking. We had to go down another boulder and a muddy path. I just walked barefoot as I usually do when my slippers don’t have enough traction.

We washed up at a local’s place and we got back to Cubao at around 11:00pm. We had dinner near Gateway – Blackbeard’s Seafood Island (commonly known as just Seafood Island). We ordered this boodle feast which satisfied our screaming from hunger tummies. We finished past 12am and JZ accompanied me to the ER to get my stitches at a nearby hospital. The staff at the hospital joked that I had brand new legs.  I incurred a total of 7 stitches that night and I was just too grateful they were able to close it.


Travel Notes:
How to Get to Wawa Dam Coming from EDSA Cubao:
1. Board an FX (45 pesos) at the terminal – walking distance from Jollibee (you can see this from EDSA-Araneta Cubao Station Northbound)
2. Alight near Avilon Zoo and board a jeep bound for the Municipality of Montalban/Rodriguez. This jeepney ride will take about 20 minutes based from what read in another blog.

You can also check these other sites for more information on Wawa:
http://yoyostribe.blogspot.com/2006/05/wawa-dam-montalban-rizal.html
http://www.vistapinas.com/article/wawa-dam-and-the-montalban-gorge