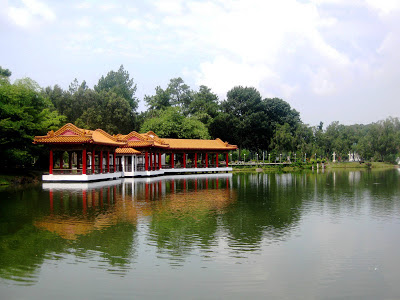 It was a Monday morning in Singapore and the friends I stayed with had to go to work. I was scheduled to fly back to Kuala Lumpur at around 9 PM that day so  I decided to explore the city on my own.

With plenty of time to waste, no concrete plans and dwindling cash, I decided to travel to the farthest terminal from the MRT, Joo Koon (East West Line) – about an hour or less away from where I was. Before I hopped on the train, I chatted with a nice, elderly lady at the station and asked for a park in Joo Koon. She informed me that there are no parks where I was headed but there’s a very nice one near the Chinese Garden station – a station away from Joo Koon.

Also referred to as the Chinese Garden, Jurong Gardens features Chinese imperial style of architecture and landscaping. Sculptures of lion, which according to Chinese beliefs represents power, guard the entrance to the garden. As I made my way around the pathways around the park, I felt very relaxed. It was quiet and there were very few people around, mostly tourists.  I roamed and walked on boardwalks cloaked by trees and spent a few minutes on a bench comforted by the breeze. 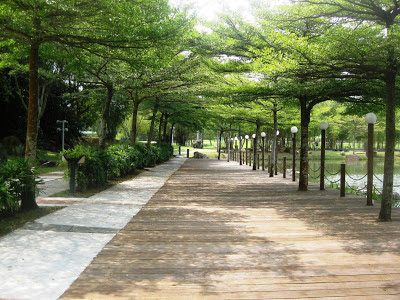 After resting, I went out to get some refreshments and headed back to the city via train to catch my flight back to KL. Though my backpack was 7 kilos heavy, it was a joy roaming around Jurong Gardens - especially since it wasn't really planned.

Travel Notes:
For the train Schedule, map and routes in Singapore, visit their website at : http://www.smrt.com.sg/trains/network_map.asp

How to Get to Jurong Gardens (also known as Chinese Garden):The east entrance of Jurong Gardens is located next to the Chinese Garden MRT station. Make sure you ride the East West Line of the MRT bound for Joo Koon which is the last stop. After exiting the train station, you will see a stone pathway and a red bridge which leads to the entrance of the park. You can just walk going there - about 5-10 minutes away from the station.

Admission to the Main Garden is FREE but there are other attractions within the park which charge a fee of 2-5 Singapore Dollars/adult.