Posted by Jovial Wanderer on January 03, 2010
My first stop for 2010 was the classic San Agustin Church along General Luna Street in Intramuros, Manila. I must admit that I haven’t given Manila a fair chance. I always thought Manila was too crowded ,too polluted and too scary. I was wrong! We still have several gems in our nation’s capital that are worth exploring. Have you revisited Luneta? It’s amazing as well but I am limiting this post to babbling what I saw in Intramuros.
The San Agustin church is one of the four baroque churches in the entire Philippines and is part of the UNESCO World Heritage list. It’s one of those properties that are part of our nation’s cultural and natural heritage and has immense universal value. 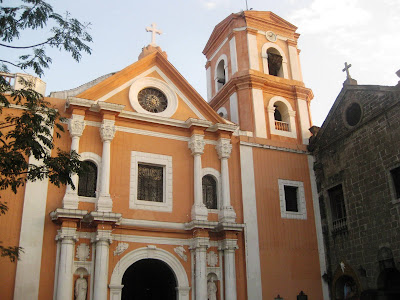 It wasn’t backpacking that brought me here. I was here as a guest in a wedding of one of the very few guy friends I have – Vince, who is like a brother to me. We met at work and finally jived after a few months of running into each other at work. We share the same passion for nature and adventure. He even introduced me to jogging in Ultra, my favorite place in the city and like a brother he teases me to the core and we often have little fights. His bride is his great friend Parky. I never told him but the kind of relationship they have reminds me of Bella and Edward of Twilight. They can talk for hours like best friends and then be oh so romantic to each other.
Me and my cousin arrived 30 minutes before the wedding so we had plenty of time to ogle at the antiquated structures around us. I don’t know anything about architecture and my memory on what we studied in History is not as strong as before so my appreciation for what I saw before me was like that of a child. It was just simple unadulterated admiration for beauty.
As Vince and I don’t have a lot of common friends – mostly just acquaintances, I didn’t get a chance to socialize that much, I just did a lot of hi’s and hello’s and a few small talks before the wedding. So me and cuz searched for a store to grab something to eat and found one fronting the church. We happily munched on chips and bread at the sidewalk while most of the other guests walked passed us. I had my 2nd coughing fit that time. For the past few days, I’ve been having coughing fits where I cough until I vomit or until my face turns red and my eyes glisten with tears from all the effort. You know, I think I’m developing abs from all the coughing I’ve been doing. It’s an alarming coughing fit which made me worried that I might disturb the ceremony. After I finished coughing until tears run down my cheeks, we headed straight to the restroom to clean up. The restroom which was near the entrance of the San Agustin Museum only has two stalls but it has this amazing chandelier and old-fashioned mirrors installed in its walls. It made me feel relaxed.
We then ran inside the church to check out what it looked like and to get seats, as near to the front as possible since I have poor vision. There’s this portion before the altar where you can light a candle for 5 pesos and offer a prayer. I immediately lit one and prayed. One of the few things I prayed for and which was immediately granted was for me not to have a coughing fit in the middle of the ceremony. You know what, the ceremony went by quickly and I didn’t have my episode! Yihaa! God is so good! 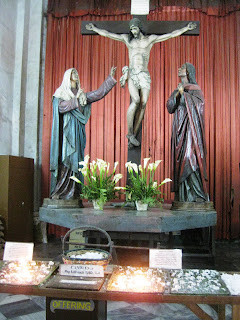 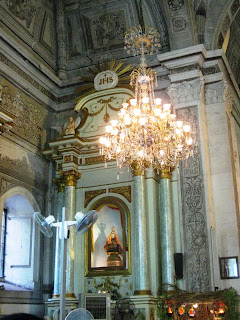 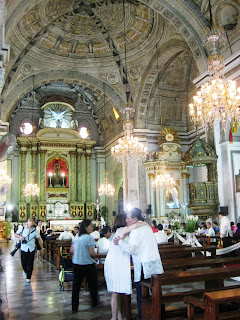 After having our pictures taken and giving our regards to the newly-weds, me and cuz did some more roaming around and ended up at the Papier Tole Shop which was at the Plaza San Luis Complex, just across the church. It’s a craft and souvenir shop that sells Filipino made crafts like key chains, rosaries, figurines and more. Prices here seemed a little steep for a regular Pinoy so I didn’t buy anything.
A few steps outside the Papier Tole Shop is a coffee shop with a well in its garden. Oooh, I see wells and I think of Sadako. I no longer have whimsical fantasies of a wishing well where I could innocently drop a coin and have my wish granted. Instead, my head has been permanently corrupted by memories of one of the scariest fictional character to date – Sadako who emerged crawling from a well.
It was my first time in this part of Intramuros and walking around the old buildings felt like I just traveled back in the Spanish era. Even the guards here dress like a guardia sibil, so charming! As I marveled on the classic structures, taxis and cars pass by at crazy intervals that I am immediately transported back to the present time.
Manila