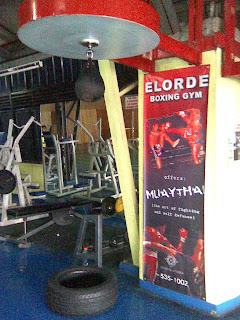 Two Sundays ago, a day after my strenuous trail running stint at Sierra Madre, I enthusiastically met with my two friends from work who I made a pact to try out boxing  at least once in our lives. My body was already in a lot of pain because of the trail run run but I agreed to go boxing thinking,  "How much more could it hurt, right?".
Since it was around 2 in the afternoon, there weren’t a lot of people to see us fool around with ourselves. The instructor placed hand wraps around our tiny hands (those bandages that come in before you put on the gloves) and were asked to jog 5 times around the gym. Damn, running again! After that, we did some warm-up exercises which involved stretching and a skipping rope. We were all sweating profusely by the time the guy was through with us. Ah, the kind of interactions with guys I have. Tsk.
We were then separated from each other and assigned one trainer each. I suddenly had this fantasy of having a hottie male trainer who will teach me boxing..then perhaps teach me personal stuff like  how to get it on? Hahaha! Unfortunately, the guy assigned to me was just like a brother so it went on professionally. He taught me how to throw punches and told me not to be too aggressive. I was so into it I felt like hitting him on the face - the competitive side of me was on the loose. Good thing he was very patient. Several times, I felt wanting to hit his face but I managed to restrain myself and focused on where I really should be hitting – his hands.
We also did the spin ball and the other small ball which looks effortless on a boxer and hopeless on a newbie. I had fun though, it was pretty challenging. Towards the end of the session, we did the cool-down exercises where they made us work on our abs. Argh, I hate exercises where I had to lie down because it makes me sleepy. Out of the blue, my trainer asked me if I do some drinking. OMG, was he coming on to me or implying that I have a beer belly?! I couldn't tell.

We finished the session in about 2-3 hours. They gave us soothing massages at the end of it. Tiring as it was, we had a great time. Our grand finale was pigging out on barbeque which was just across the boxing gym. Mang Speed’s barbeque sells squid, salmon, pork barbeque , isaw, chicken and more at affordable prices. It’s also one of the great reasons to go boxing in Elorde Mandaluyong.
I highly recommend boxing, it’s a great sport which tones your body and helps you improve on your focus and listening skills. I now have a more profound respect for boxers. It's not just about force and strength but composure and grace. 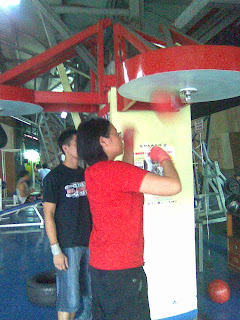 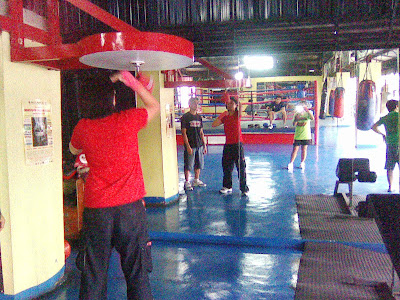