The Corregidor International Half Marathon Experience

I was nervous about joining this race because  - 1. I don’t like road runs 2. I felt out of shape. However, since me and a colleague went here on an all-expense paid trip courtesy of the organizers (our company being one of their registration partners) and that the venue is enchanting Corregidor – I  did not let my  nerves get to me.

When the day of the race finally arrived,  I found the courage to face it  with a kick-ass attitude. I was determined to finish the course with a decent time and  secure a finisher’s medal.  To get one, a runner must cross the 10 KM Marker within 1 hour and 45 minutes.  It would be an easy feat for the real runners but I was unsure of myself as I haven’t been training adequately.
A few minutes before gun start, I gulped down my favorite chocolate-flavored energy gel  - Stinger (available in R.O.X.  at 70 Pesos/piece),  finished off 330 ML of Pocari  Sweat and did a warm-up run with my colleague and some stretching exercises. I made sure I warmed up well.
The opening ceremonies started with a prayer, National anthem, some words from the organizer – Edward Kho and finally, the gun was fired signaling the beginning of our quest/ordeal/self-imposed punishment, whatever.
I started running, focusing on my own pace.  I was mindful not to accelerate. My game plan was to run a non-stop, steady pace.Thankfully, the weather was cloudy. Wind was blowing and the course showcased breathtaking views of Corregidor so our run was more like sightseeing  - fast forward mode.  Several portions consisted of trails – which I was accustomed to and these were the parts  where I overtook several runners ahead of me. My pace felt great! My game plan worked and a little over an hour, me and my colleague finally reached the 10 KM Marker.  We made it through the cut!


After crossing the 10 KM hydration area – where there were bananas and refreshments, I began feeling really tired. I started walking and gulped down my second energy gel. I let my colleague go ahead of me.  I didn’t think I could ever get back to a steady running pace. The  most challenging part was the killer uphill trail towards the end of the course which got most of the runners walking and gasping for air. I walked with my back on the course. It was then when I ran into a friend who I haven’t seen in years! We chatted for a while and when my energy returned I ran again – and ran until I got to the finish line.
My official time was 2 hours 47.09 Minutes. I ranked #30 out of 79 Female participants. Yipee! I was very much satisfied with my finish considering that I wasn’t even sure I’d get through it. It’s my last race for 2010 and I’m glad it ended well. 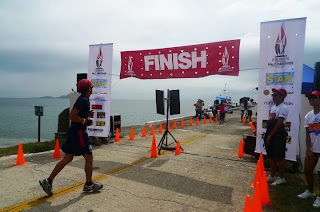 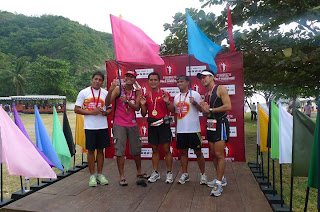 This was the best race I’ve joined for 2010 because the organizers did a great job of making sure .  Course was marked well, the marshals were on their toes and quite very friendly.  There were adequate water stations with banana and Gatorade. My favorite part was this hydration station where they gave out honey in resealable, portable packets.  The buffet which was part of the race package was the best! It was eat and get all you can! The finishers medal was also worth mentioning. It was amusingly heavy – quite a nice souvenir and could even pass for a self-defense tool. It could seriously injure someone with its weight. They also gave out a red long stem rose to every female runner who crossed the finish line. Almost everything was well thought of and executed well.  If only they were able to give out the certificates which was  supposed to be given after the race, it would have been perfect. Nevertheless, since everything went well, it was forgiveable.
Thank you to the organizers of the 1st Corregidor International Half Marathon. I hope you will still be the organizers for next year. :)
Corregidor Running