Posted by Jovial Wanderer on January 29, 2011
A year after my first time in Batanes, I had the chance to go back again, solo this time, but instead of a backpacking escapade, it was for work. Since work involved discovering adventure destinations, I made sure I squeezed in some hiking. (Work + play! Yihaaa!).

I coordinated with William of the Batanes Mountaineers. Since he was out of the country at that time, he referred me to a relative who is also an avid climber. I decided to meet with him after lunch and he picked me up on his motorbike. I gulped at the sight of what would be my ride. I don't trust motorbikes especially since I attract accidents. Since I cannot afford to be picky, I took a deep breath and rode at the back.
What's good about motorbikes though is that you can get unobstructed views of the mountainsides and cliffs at the side of the road. I was able to take some pictures and videos. I tried to act as bravely as I could. The ride took about 40 minutes, accident-free.
Jump-off was at Barangay San Vicente, near the port where boats dock going to Sabtang. We parked the bike in a shed and started with a very steep descent on a cemented road. I thank God for the sun. Had it been raining, I was pretty sure I would have fallen somewhere.
A few minutes off the main road, I was already able to see refreshing coastal views from a hill. I pause to take some pictures and to catch my breath. After resting, we set deeper into the forest where I saw twisted branches stretching upwards like a welcoming arch for royalties. It was just what I've read from the web. The place felt surreal, like being in a fairy tale minus the wicked witch. 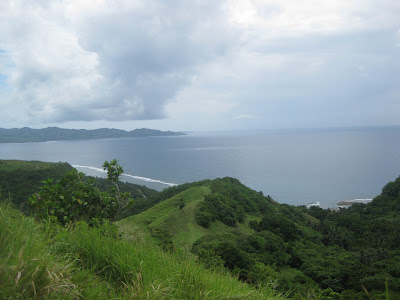 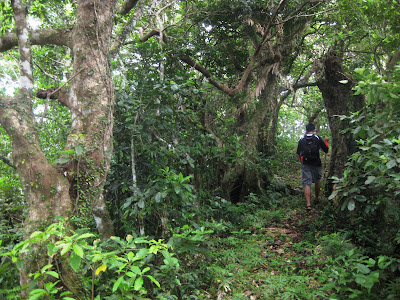 After less than two hours of negotiating through alternating flat and steep terrains, we reached the summit. Fog enveloped the surrounding area and I couldn't see a thing. Fortunately, it cleared after several minutes and I finally saw the landscapes below - ocean, towers, hills, a lighthouse. As with all my mountain quests, the view gave me euphoria. 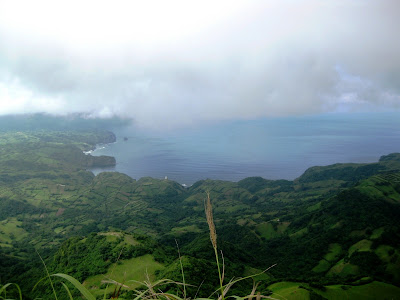 We took some pictures and got down quickly. My guide offered to show me Racuh A Payaman, popularly known as Marlboro country after the old tv ad. I also requested him to bring me to the Fountain of Youth which I read from the net. I had to trek some more to get to the site but it was worth it.  Both places were as breathtaking as the rest of what I've seen around Batanes.

There's still some trails that I missed such as those in Itbayat - which requires a longer stay and more preparation but at least this one's already off my list. :)

Batanes Mountaineers - Add them on Facebook
Or visit them at  Multiply

Guides can also be secured at the Barangay Hall. For more information on mt. Matarem, you can also check out  Gideon Lasco's Pinoy Mountaineer.