A Tribute to a Great Friend and Fellow Hiker

Posted by Jovial Wanderer on December 06, 2011
A few years ago, I created a post  for one of the feeeew guy friends I have. You see, up until last year, I've always felt shy talking to guys (lil girl pa kasi, hahaha!) and so I treasured those limited number.  I made that post as he was leaving to pursue an employment opportunity overseas. The post was uploaded on a previous site which I had to shut down. As he is insisting I create a new one (:P), lol, as a loyal friend, I have obliged. (uhm, cge na nga, the truth is, I actually enjoyed writing this! eyes rolling)
This time, I am creating this as a well-wisher's post as he commits to a lifetime of adventure with his kind, pretty, sexy partner! (Hola Sophia!)
Yton despite being the exact opposite of my bubbly, sunshine personality is someone I trust because he knows how to keep secrets and when to joke about it.  He's adventurous, loves football, mountains and traveling - sort of my male version. We even went to the same high school!
He's the only one who's allowed to call me fat ass to my face without incurring any head injuries (to which I'd answer back with worse insults :P). His quick wit and ability to speak the truth in its rawest form is endearing. To friends and family, I am sure you would agree that these make up his eccentric charm.
To my confidante, caring (as witnessed numerous times), scary adorable, forever smirking buddy, congratulations! This is my way of saying that you are loved - and that I want a Cristiano Ronaldo jersey or GPS for Christmas :P. 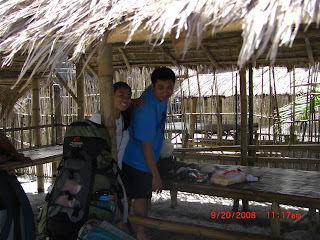 To Yton and Sofia - May you have a million times the fun and twice the adventures we had!