Posted by Jovial Wanderer on December 04, 2011
Sometimes, surviving a mishap is the main adventure. Here's some (and there's plenty more where that came from! haha!) of my life-altering accidents from way back.
Warning : Unpleasant photo with blood, a few paragraphs away!
1. Got Run Over by a Boat - I was in my pre-teens, enjoying a family vacation in Batangas.I was happily swimming near the shore and waded a few feet away when suddenly, a small boat filled with passengers charged towards my direction! I hear a lady screamed "yung bataaaa!" ("The kid!").
I quickly dove under the boat and fortunately avoided the engine. As I raised my head to gasp for air, a part of the boat hits me on the face. Aaaargh.  It was the outrigger! To avoid getting dragged, I dove again and this time, I was able to get away from the boat. My face was swollen after that but I managed to join my family, a few minutes after the incident - for a boat ride. The irony!
2. 7 Stitches for the First Timer - two years ago, I agreed to join my friends to try rock climbing for the very first time in Montalban, Rizal. This area is famous for breathtaking views of  the Wawa Dam which was in the middle of mountains. It's a place that I've been wanting to see.  When it was my turn to climb, it started to rain making it more challenging to cling to the rocks.  My hand slipped,  I swung to my right and hit a jagged rock. It instantly ripped a portion of my left leg. I looked down and saw blood flowing from my leg. I felt dizzy. I looked at my wound again. There was an obvious tear on my leg and  white stuff was oozing out. To make matters worse, I had to go hike down the mountain to get to the hospital (uhm but before that, we ate first because I didn't want to lie in the ER with an empty stomach :P). It was so painful! I received a total of stitches on my left leg that evening and missed a magazine shoot the following day. 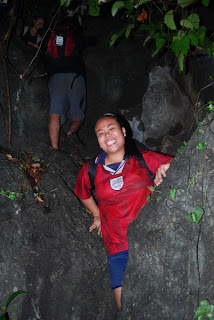 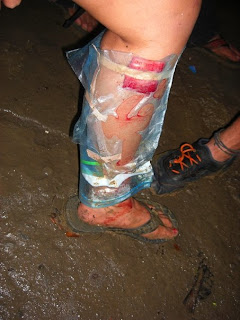 3. Drowning at Hamilo Cove - me and some friends borrowed a boat from the locals and paddled to the middle of the ocean. The water was a deep shade of blue and we can't see anything underneath. We dared each other to jump. Without thinking, I hopped off the boat.
I sunk and sunk and never got to the bottom. I felt so scared. I continued sinking because I started to panic. I did not want to die that way. I gathered every ounce of courage and tried to calm down. I started to float again until I got rose to the top. I couldn't climb back on the boat because it was too high for me.  A friend reached out with an oar and I grabbed it and managed to push myself up.
I did not swim after that. Up to this day, even if I'm already a better swimmer, I feel very afraid when I can't see the ocean floor.
4.  Surviving the Mob at a Football Game - I was on a dream trip. I flew to Malaysia to watch one of the world's most popular football clubs, Manchester United. They were playing an exhibition match against a local team. Football back then wasn't popular in Manila and games certainly weren't received just as well  as in most parts of the globe.  I've only seen huge crowds on t.v. and I never imagined it would be like that. It was a surreal experience seeing Wayne Rooney on the pitch, playing a few meters in front of me! After the game, I got stranded at the train station for about 2-3 hours because it was very difficult to get a ride because everyone went home at the same time. The guards  would limit the number of people inside the train station and would close the gates after the mob. I waited on the floor to be able to catch a ride back to my hostel in downtown KL. 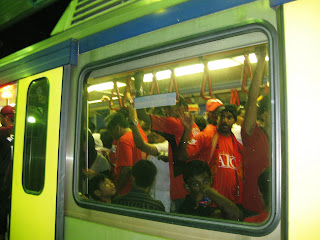 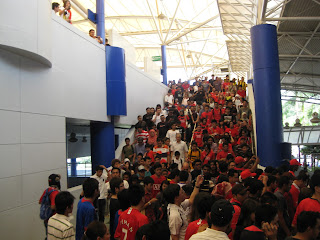 5. Bike Crash - Nuvali
It was my first week at my new job as travel specialist when I was asked to join my colleagues to test a trail bike route for a competition they were organizing. Despite my history of bike accidents way back from childhood, I had to go. It was a hot day and I was trailing behind everybody else. I finally approached what seemed an easy part of the trail and it was downhill. I was having fun and did not expect the sharp turn ahead and the huge tree that stood by the bend. The bike slamed over an ant hill and I flew off  the seat. My face hit the trunk of a tree and my body crashed on top of an anthill. I let out an intense scream - the highest pitched scream I could spit out from my diaphragm. For a few seconds, I stayed in position, afraid that something broke. Apart from the burning sensation on my cheek that collided with the tree and the ants that started attacking me, all bones were intact. I stood up and brushed off the ants. Whew, I was in pain but glad that I was fine.
A handsome colleague rushed to my side asked me what happened. I answered in a cool tone, "uh, I fell.". (wished I said, "I fell for you". hahahaha!) After that, I spent the entire time walking the bike instead of riding it. :P 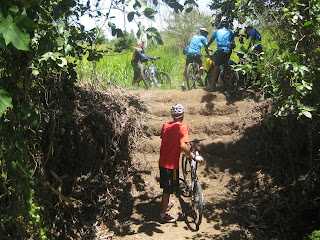 With all these accidents, I learned to use my head before doing anything. I've also developed a positive mindset that whatever happens, it's going to be a great adventure! If I haven't experienced all these, I won't be as smiley as I am today and while I am trying to take every necessary precaution when traveling, I learned to calculate risks and have fun at the same time!
Misadventures