Posted by Jovial Wanderer on September 09, 2012
After eating lunch at my lolo's place who was celebrating his 94th birthday, me and several members of the clan revisited Ustingan Cafe. It's located a few blocks from the public market with  views of Mt. Banahaw as part of its backdrop.

Started in 2002, Ustingan Cafe in  Luisiana, Laguna was the brainchild of the Igloria siblings who wanted a place where locals can hang-out and celebrate important events without traveling to nearby Lucban (less than 20 minutes away by jeep), which is famous for its annual Pahiyas Festival and flavorful cuisine.

The siblings' penchant for coffee and the arts is showcased on the cafe's decors, most of which are their creations. 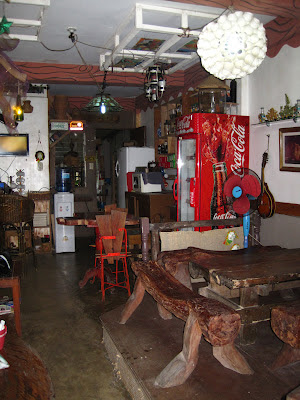 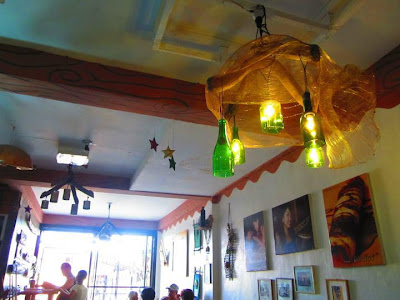 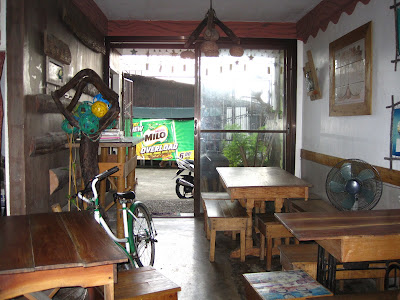 We had chilli pops and cups of various brews. To deviate from my usual cup of Americano, I tried cinnamon coffee. It was served in a pretty cup with cinnamon sprinkles on top. When I took a sip, I had to smile. The mixture of cinnamon and coffee made me feel energized and giddy instantly.

Most of the items in the menu cost less than 50 Pesos. With 100 Pesos, you can go home perky and full. :P

How to get to Luisiana :
From EDSA-Boni (Southbound), ride one of the buses bound for Sta. Cruz. At the Pagsawitan terminal, ride a jeepney to Luisiana. Total travel time from Manila would be 4-5 hours. Safe budget for the fare would be 500 Pesos (round trip).