Posted by Jovial Wanderer on March 01, 2013
After a month of rest from the outdoors to focus on other things, I got back into hiking with friends JZ, Gideon of PinoyMountaineer, Martin and Tarlac-based outdoor group, GAME-NEST  (Ivan, we miss you! :P). Their group also hosted us when we did a grueling and painfully long day hike at Mt. Damas last year. (Blog here)

In a day, we finished what is now commonly known as the San Jose Circuit, named after the municipality where trail starts and ends. This 17.7 KM long trail passes the peaks of Tangisan, Bungkol Baka and Kawayan. It starts at Sitio San Pedro, Barangay Iba, a community that can be reached on foot by crossing a river.

We trekked at a moderate pace - slow enough for us to take photos but quick enough to make it back down before we needed any headlamps.  We started at 9:00 AM and took 10 hours to complete, including lunch, pictorials and joking around.

Our first peak was Tangisan  (491 MASL). The trail was steep on most parts which wouldn't have been a problem if not for the merciless heat of the sun. The slim trees we passed could barely provide some cover and it felt as though there wasn't enough air. I doubted myself if I could complete the hike at this  point. The energy drink which I consumed before we started was threatening to exit my mouth but it was pride that held it in until we stopped to rest. It was a few meters from one of Tangisan's peaks which has a nice view of valleys resembling an airport runway.
From here, we continued to a nearby peak which was about 10 minutes away. A huge boulder serves as its viewing deck showed a different angle of the flat lands of Tarlac.


From Tangisan, we followed an exposed trail at the side of a hill with remarkable views of nearby peaks. At this time, our bodies had adjusted to the sun's heat and the hike became more manageable. I no longer felt the need to go back down. Hehe!


After  lunch beside a stream where we were able to freshen up and get some drinking water, we continued a path filled with banana trees. My feet was already on "auto-pilot" mode due to fatigue but I was intrigued with what we were about to see.

By 3:00 PM, we finally reached Bungkol Baka (617 Meters). Its view on one side features the contours of a mountain while another side shows hills and valleys. 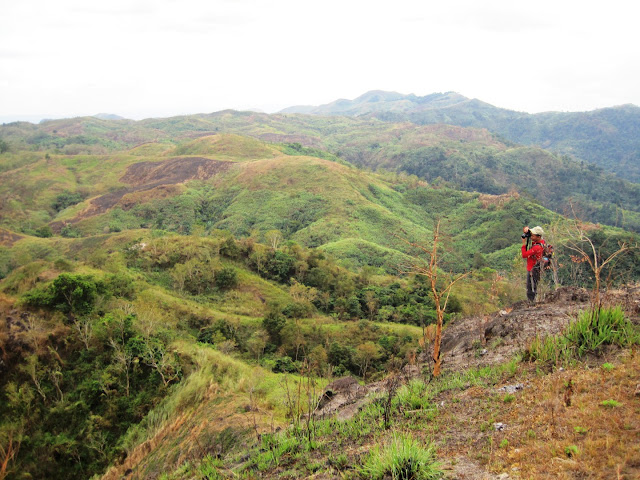 Our last peak, Kawayan, seduced us relentlessly from a distance. It was just across us! Though everyone was tired, its proximity, an hour hike away was just too tempting to resist.

As I was lagging behind, I was amused to see my companions running in full speed away from an herd of cows. :P 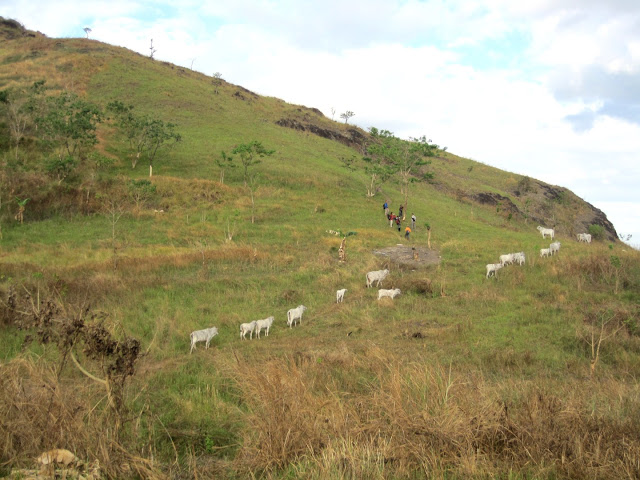 By past 4:00 PM, we made it to our last peak! As with all mountain hikes, the fatigue is forgotten at the summit as soon as you see the views. :)

It was 7:00 PM when we reached a store in the village where we feasted on biscuits and softdrinks. We were later picked up by a dump truck which allowed us to enjoy a view of a dark sky scattered with stars.

Dinner was served at Vice Mayor Capitulo's place in Barangay Iba and their family generously allowed us to use their bathrooms to freshen up before our travel back to Manila. Thanks to Gid for the ride home! :)

Check out Gideon's blog about our climb at Pinoy Mountaineer.
Itinerary here.
Additional travel information on Tarlac can also be found at Visit Tarlac.

Expenses:
Victory Liner Cubao to Tarlac (We got down at Victory Liner's new bus stop in Tarlac behind Mc Donald's, just across Siesta Bus Terminal) - 201 Pesos/each
Payment for Guide & Gasoline for the Dump Truck to Brgy. Iba - 500 Pesos/each