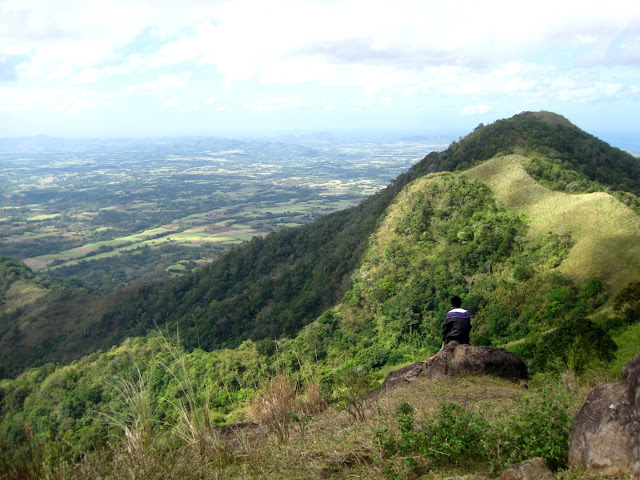 "I'm going back to Canada next week."

My good friend Drew's bittersweet announcement gave way to planning his last escapade in the Philippines. Gorging on Chinese food, which we both enjoy, came to mind but for the nth time, we chose the outdoors.

The group  decided on Mt. Talamitam, which is just three hours away by bus from Manila. It's jump-off is 30 minutes from another hiking destination frequented by local hikers, Mt. Batulao. In fact,  some physically prepared hikers  would combine the two in one trip, taking up half a day to complete both to maximize their resources.

Although I have seen the grand views from its peak too many times, I was still excited at the thought of traveling with friends and going out for a hike, even for just a day. Joining our trip were Kaiz Galang of MissBackpacker.Info, Kirk (a friend of Kaiz' and now,  ours too!) and Jerome of Balintataw.org.

We met at the Crow bus terminal along EDSA-Pasay. It's located beside Hotel Sogo and Mc Donald's (open 24 hours so you can grab breakfast here) , across Metropoint Mall.

Travel time took around 3 hours (124 Pesos).
Note: If the conductor is not familiar with the route marker, KM 83, just tell him you'll be going to Mt. Talamitam. It's at Sitio Bayabasan, Brgy. Aga.

At a shed a few meters from the highway, we registered and paid 25 pesos/head. There's also a restroom here where you can "unload" before a hike. Although one of our companions, Kaiz, who has also visited the mountain several times is pretty much familiar with the trail, barangay policy mandates that all visitors get one at a rate of 350-400 Pesos/day. We hired one, a young guy no older than 20.

At a  little past 7:00 AM, we made our way up the mountain and in a few minutes, got down to a river. There used to be a hanging bridge made of bamboo  built over it to get to the trail head, however, only remnants of its structure can be found.  Crossing the river was quick and easy but we still had to slow down to avoid slipping. 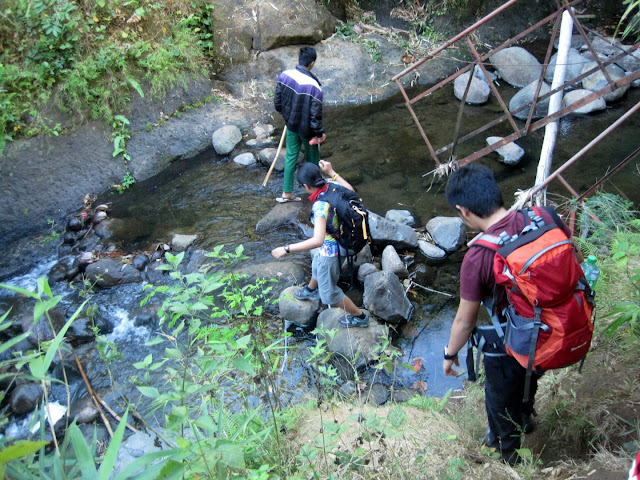 The steep but short trail covered by trees was at the early part of the hike. After that, under a nearly cloudless sky, we ascended a massive grassland scattered with cow dungs. As this mountain is across Mt. Batulao, I looked back a few times to be  compensated by the views of the nearby mountain. 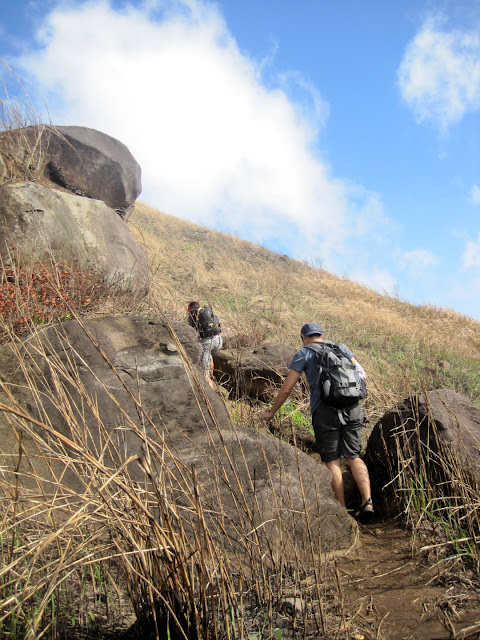 In 2.5 hours, we arrived at the summit (altitude at 630 MASL), rewarding us with views of other peaks such as Mt. Makiling, Mt. Batulao, Pico de Loro - its infamous parrot's beak glared from a distances making it easily identifiable.

We were sitting down no more than 10 minutes when an ice cream man arrived at the peak to selling us goods. Whoa! Now, that's truly hard-earned money.


We took our sweet time at the peak, chatting and laughing the rest of the morning away.

As a post hike treat, we traveled by jeepney to Mahogany Market in Tagaytay city where we celebrated over rice, beef bulalo and Tawilis, a small fish, normally served fried which can be consumed in whole. We split the bill and only paid (230+ something each).

Our last stop was at the family rest house of Drew, where we cleaned up before taking the bus back to Manila (104 Pesos).

A copy of an itinerary to Mt. Talamitam can be found at PinoyMountaineer.

To Drew, wishing you more fun and jaw-dropping adventures in Canada. See you again soon! :)