Posted by Jovial Wanderer on March 29, 2013
As members of the group were coming from everywhere, our group convened at the Legazpi bus terminal. I got reunited with Kabayan hiking buddies (Read about it here), blogger friend Edgar of EazyTraveler, who's also our trip organizer and Ryan T.  For the  first time, I met avid travelers, Philip, Mikoy, Ann and Ryan D. From here, we took a one hour van ride to Tabaco city (50 Pesos) where we hitched on a vehicle transporting the staff of Mayon Skyline (Formerly Mayon Rest House).

By 5:00 PM, we were already settling in at our "base camp", the floor of the cafeteria. As bedtime was several hours away, we wandered around Mayon Skyline which is a destination on its own. There are huts which serves as an excellent view deck where you can see the peaks of Mt. Masaraga,  Mt. Malinao and along with Mayon, it forms what is known to Filipino mountaineers as the Albay Trilogy. A shadow of Mt. Isarog in Camarines Sur can also be seen.

We turned in early after bonding over coffee and taking advantage of the unlimited videoke.  In the middle of the night, while cocooned inside our sleeping bags, over the hard, cold tiled floor, the temperature dropped. Suddenly, my jacket and all the protection I wore all became insufficient to battle the cold. I resisted the urge to snuggle to save myself from a black-eye, haha! I couldn't sleep well after and waited until the alarms went off before preparing for the hike.

It drizzled for several minutes just as we were about to walk out. Fortunately, it stopped. By 5:30 AM, we were already making our way to the jump-off which was just a few minutes from where we spent the night.

The first hour of the hike was through a rough section of the forest. A single person, steep, trail made slippery by the light rain and sprawling with plants that can cause severe itching on contact. On some parts, only one foot at a time could fit while some are dangerously located beside deep ravines with only weeds or tree branches to hold on to. It was actually my favorite part as there lots of trees and plants, truly a visual treat. 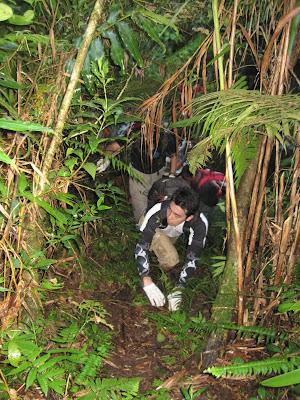 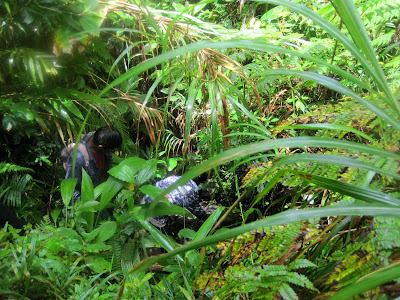 The next few hours was terrifying as the trail involved walking over wet boulders which reminded me of the conditions when I had a rock climbing accident in 2009. It was also drizzling then. While strapped on a harness, attempting to get to a hard section of a boulder, I slipped and hit my left leg against a jagged rock. It ripped a portion of my skin, blood oozed out and I had to go to the hospital to get 7 painful stitches. I could only drag my left leg to be able to move weeks after that. It was traumatizing and every time the situation is recreated - seeing large rocks, especially wet ones, fear uncontrollably rushes in. 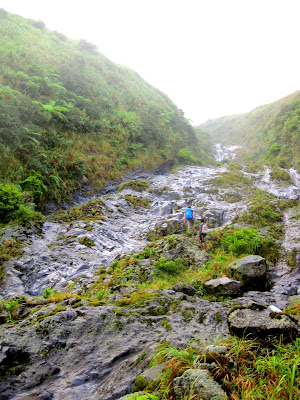 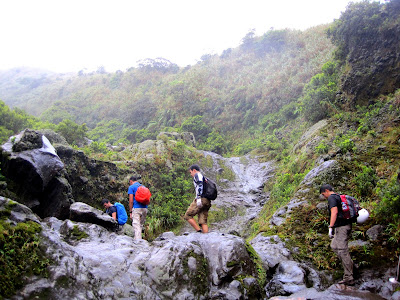 Fear became easy to ignore as I was with excellent company and despite the difficulty of the trail, we had time to talk and laugh. We were also led by a good group of guides who made sure everyone is able to get through the boulders safely.

It rained on and off during the entire hike and after 3 hours of ascent at 4.9 km of challenging trails, we aborted  our bid to the summit which was just 1.6 km away. The trail was becoming dangerously slippery and was meant for another day.

The wet conditions we encountered during this 7 hour hike has made this my most terrifying mountain adventure, personally, much scarier than crossing the knife-edge trails at Mt. Guiting-Guiting, a mountain in Romblon with a difficulty level of 9/9.

It was a good decision that we aborted because rained continued even as we left Mayon Skyline. When we got back to Tabaco, everything was dry and it look like it hadn't rained.

Before we separated, our group had a quick early dinner was at Graziano's, a cozy Italian restaurant, 15 minutes away by tricycle from the Tabaco Bus terminal. But since everyone was in a hurry, we continued our post-climb celebration at Keg at the Fort, when everyone's dressed decently with not a stray hair in sight. :P

Though our group failed to make it to the summit, I consider this a successful hike for it isn't always about reaching the summit. What matters most are the relationships we're able to build and keep while in pursuit of our passion.

For more information on doing a day hike at Mt. Mayon, check out  Pinoy Mountaineer.

Travel Notes :
1. Legazpi City is the primary jump-off to hiking Mt. Mayon. From here, there are a lot of trails leading to the summit. Some would take two days, while some takes only a few hours. It all depends on your preference and how much time you have. Whatever trail you take, you must have physical preparation as the trails are steep. Try stairs climbing or do some minor hikes.
2. For a hike to the summit, better coordinate with the tourism office (Albay Tourism Office is +63(52)8206314 or (052)820631). Our friends at Trail Adventours also offer hiking packages at 4,800 Pesos/head (Local Rate) | 5,500 Pesos/head (Foreigner Rate). Visit their website to inquire. Contact Details : info@trailadventours.com ; Contact Numbers : (+632) 6979711and (+63917) 5827517.
3. To get to Legazpi City, you can take a 10-hour bus ride from the Araneta Center Provincial Bus Terminal or take an hour flight from Manila via Cebu Pacific or PAL Express. Going here, I rode a Belleza bus from the Cubao Bus Terminal (Aircon, 500 Pesos only, one way) which departed at 8:40 PM, an hour later than what I was told. It's a good option if you're on a budget (friendly staff) but otherwise, I'd suggest riding the popular ones such as Cagsawa Travel & Tours bus, DLTBCO, Isarog Lines as the Belleza bus has a small leg room.
4. For this hike, I packed 2.5 Liters of water, 2 Snickers bar, a burger, packs of nuts and raisins, first -aid kit, sealed all belongings inside waterproof bags, waterproof jacket.
5. Recommended Outfit :  Dir fit shirt, trekking pants, arm sleeves, cap,  Footwear must have strong grip.
6. Bring a gas mask to be used near the crater rim. The ones for filtering inorganic gases, (sold around 300 Pesos at Handyman).