Posted by Jovial Wanderer on September 20, 2009
If you’ve already spent time with me, you would know, that me and the fashion industry are not in the same realm of existence. The physical activities that cause me amusement must have the elements of dirt, body pain and sweat present for me to enjoy it. Finesse, is still a trait I am trying to acquire.

Last evening, I was able to venture into the world, which I’ve only seen from a distance, through the medium of television. I do like watching Project Runway, ANTM, The Hills, Make me A Supermodel - not for the clothes but due to sheer amazement at the ability of the cast to create something beautiful while they are under pressure. I also love the competitive, tense atmosphere reflected in each episode.

My friend offered me a part time job as one of the people who handled the registration for the Pre-Launch party of the 1st Philippine Model and Fashion Congress held at Aquaknox in Makati. It was an event that was participated by photographers, make-up artists, modeling agencies and aspiring models. Since it sounded different, I accepted the post in a heartbeat and laugh to my heart’s delight when I it finally sunk what I’ve gotten myself into. 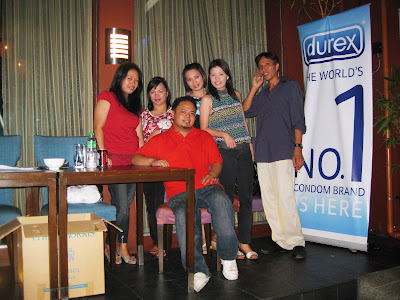 What an experience it was! Congratulate me for having only 3 bloopers for that evening – tripped once on the red carpet, fell on the stairs after talking on my cellphone – witnessed by the resto staff and all the passers-by around Aranaiz Avenue and soiled my fave shirt with soy sauce prior to the event – witnessed by my two new acquaintances. It wasn’t my fault, it was that sushi’s! That’s pretty uneventful for me already.
I was able to talk to a lot of people – event organizers, bouncers, waiters, photographers, real models, aspiring models, annoying wannabes and what have you. The original plan of me helping out in the runway by shouting out the model numbers before they walk in the ramp did not push through but I get to watch the show and hand out sheets of papers to the aspiring models.
I was also able to exercise the power of my patience and composure as I dealt with some wannabes who haven’t even began their modeling career and already acted like a diva. Geez, there was this girl I wanted to kick but I managed to smile sweetly to her while I attended to her annoying query. That modaf*cka ain’t getting any special treatment from me. I then had a resolution that I should only engage in this activity once in a while or I might gain some stiletto wearing foes who can stab me in an instant.
The wonderful side of it was this – I was able to immerse with different kinds of guys. I met a Jake Cuenca look-alike who had the most amazing eyes. We chatted for a few minutes in the registration area but he had to go inside for the activities and I haven’t seen him since. If I weren’t so professional, I would have retrieved his contact information – which I had full access to and sent him a message, but I didn’t. He’s too young anyway. He told me he just graduated from college. Oooopsy! That’s almost the same age as my younger sister. Then there were these guys asking me for free condoms because Durex was one of the sponsors. Hahaha! The coordination with the sponsors were done by a different group so I really didn’t have anything to do with that. Then there were these photographers who wanted to share some hot gossip about someone popular in the fashion scene but they restrained themselves from telling me because I didn’t know the person anyway so the malicious gossip would be less appealing to divulge.
The turn-out of celebrities who already made it in the fashion industry was great – that’s according to one of the organizers. Since I am not familiar with most of them , I just had to take their word for it. There was indeed an influx of beautiful people in Aquaknox that night , especially the guys so I’m not complaining. 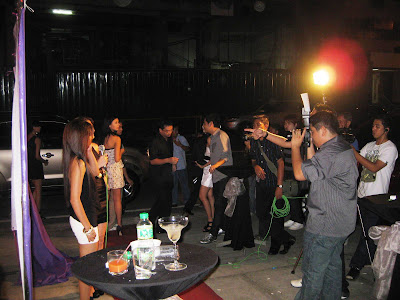 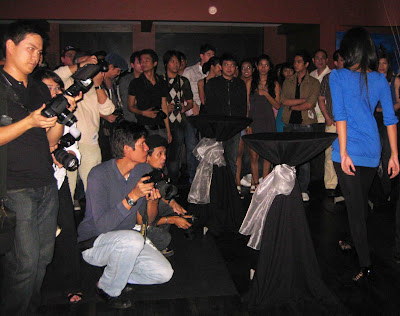 Two dreams came true that night – well from what I know anyway. You see, part of the goals of the event was to give exposure to aspiring models – even those without prior experience. Two people showed up at the front door – who would qualify under plus-size category. They were really apprehensive at first when they saw most of the people milling about – average sized people in the hippest clothes. In my book, these two persons are beautiful and have equal shots – given the right attitude, clothes and all that. So me, RD and Cynthia encouraged them to come in. We were so successful at it, we were able to convince them to go and they made it up to the runway! There were more than 30 aspirants who came in – some got terrified, they didn’t even get past the photo shoot. They made it all the way and ended with modeling jobs that evening! I feel like a proud mother. (I really hope and pray they make it big because they’ve got great personality – quite idealistic of me, I know). Right before they went home, we took our pictures with them – sadly I wasn’t able to take a shot with my camera. They thanked us profusely and they looked immensely happy.
The event finished past midnight with more partying after that. My friends and me were so hungry we ran off to Quezon Ave hoping to eat at Grilled Tomato – one of my favorites but they were already closed so we capped the night with more food I can handle at Mang Inasal.
It was a great evening – saw dreams came true right before my every eyes, met and talked with really cute guys and learned stuff about myself as well as the fashion industry . I was also reminded another principle I adhere to – never ever abandon a dream for it will come true someday.
The funniest line I’ve heard that night was from this pretty lady who signed up – she told us that “Oh, I’ve done modeling. I’m a run-away model.” …Well, she surely didn’t run-away that evening - even ended up with a modeling stint.
What an urban voyage this was. I was able to travel to a different dimension – the world of fashion, a place which I was scared to venture because it was so different from what I was used to – sports, relentless food trips, laughing like a hyena and books. I enjoyed the experience but I truly missed my camping gear, football, my non fiction book finds and fast food!
More pictures here :
Odd Jobs Personal Urban Adventures