First Time on A Horse

Posted by Jovial Wanderer on September 01, 2010
I used to detest horses. I occasionally ran into them on mountain climbing trips. They block the trail, they’re smelly and they poop everywhere.I also don’t like seeing them on movies as well and unless I have no other option, cowboy movies are a no-no for me.
All these changed when I was finally able to mount a real horse while in Bukidnon. We went to this resort farm called Cuadra and my hosts introduced me to this horse. I was told that it competes in show jumping events.
First time I approached it, I felt intimidated with its massive body. The cowboy told me that it was okay for me to touch its face. And so I did. Its texture was soft and its eyes – gentle. I couldn’t help but be charmed by it. Then I was asked to ride it. I had to step on a chair because it was so high and I had no riding experience. I was afraid I might hurt it because I had to grab on to this handle which was on its back to finally get on top of the horse. I felt like a princess as I sat on its back. Then we walked around the farm which was a bit challenging because I had to continually grab the reigns to make sure it goes to the right direction. It was a bit scary because of the possibility of it taking off and me losing control of the reigns. Since we didn’t have enough time, I was only able to spend a few minutes with the horse. Bitin. I want to go back and ride for real. Get out of the farm and ride in mountains and cross streams. There’s tons of places in Bukidnon where you can do that.
Now I understand how equestrians could fall in love with horses. They’re loveable creatures as it turned out and there’s a certain rush that comes with riding on top of horses and seeing things from a higher angle. I definitely want to do more of this! Hay, when again? 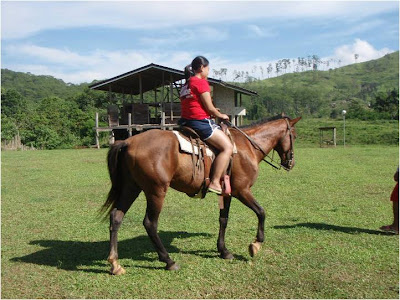