Posted by Jovial Wanderer on March 24, 2012
Two weeks ago,  a couple friend who are both mountaineers got married.  Several hours after their wedding reception, me and 10 others joined them in Benguet for their honeymoon and first climb as a married duo to Luzon's highest peak - Mt. Pulag.

We ascended the mountain via the Ambangeg trail, which is popular as the easiest route up. The trail is mostly even and the  slopes are mild. However, you start at a high altitude and the thin air can get to you. That's what happened to me so I had a rough time. I felt dehydrated,  moved like snail and was out of breath for more than half of the way. Death came to mind as I breathe like I was having an asthma attack.  I managed to get to the saddle campsite - which is 90 minutes from the summit in 5 hours. 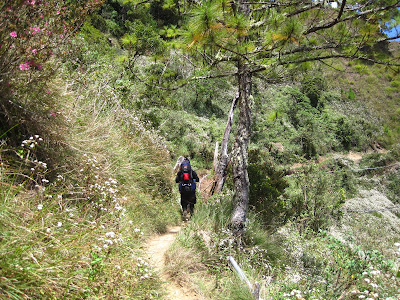 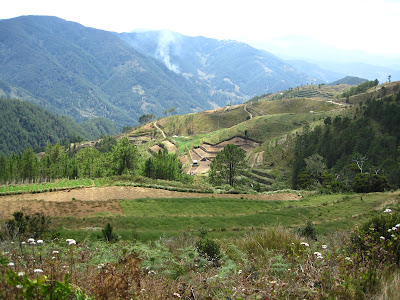 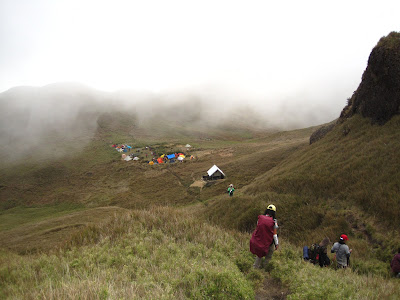 The cold was so much more than I had expected so I turned in early after we had dinner.  I actually thought I could not survive the night because all the layers I've put on were not enough to warm me up as I was alone inside the tent. Wah!

The following day, I bid goodbye to the group. Me and my guide Soriano left the camp at 5:30 AM to climb down via the Akiki trail where we witnessed the sunrise. :)

We passed by the mossy forest, a grassy area called Marlboro (after that famous commercial) and the dreaded pine tree forest where I fell and hit my back on wood. Soriano had to carry my backpack until we reached Eddet River until I fully recovered. Then I had to carry it again for the next two hours of our descent. The pain was worth it because the views were awesome! I am looking forward to do a day hike traverse in Mt. Pulag some day. :) 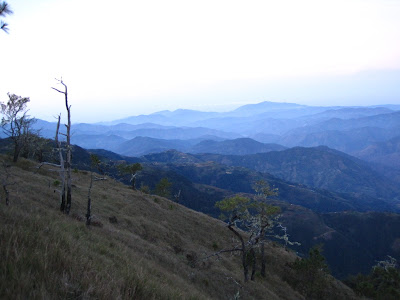 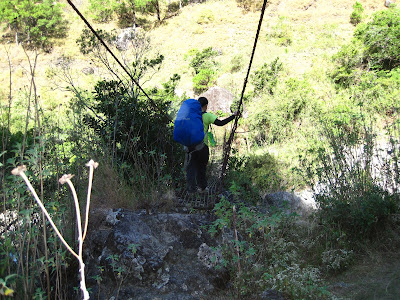 Mt. Pulag, the Philippines' 3rd highest mountain is a destination that has been treaded a thousand times by hikers - both local and foreign.  Ambangeg Trail in Bokod, Benguet offers the easiest access  with its forgiving rolling terrain and can be climbed by first timers with ample preparation and precaution.

Trip Details :
Itinerary Can be found here : Ambangeg Trail / Akiki-Ambangeg Trail
Ideal Budget : 3,500 Pesos or less
The number of people in your group will impact the budget required because of the guide fee and the transport arrangements from Baguio to Ambangeg which can be split among yourselves.

Two Key Contact Persons in Climbing Mt. Pulag :
Ms. Gina (Jeepney Arrangements from Baguio to Mt. Pulag jump-offs) - she is a bubbly legend among local mountaineers. Usual pick-up point is at Victory Liner Baguio. From here, Ambangeg jump-off is 5 hours.  You can also request for a side trip to the scenic Ambuklao Dam before your climb.
Rate : 8,500 per jeepney which can sit 16 people with backpacks
Smaller groups can text ms. Gina and ask if you can join other groups to save on the cost
Solo climbers - can also go to Pulag without hiring a jeepney. Tips are available at the comments section of Pinoy Mountaineer
Contact Number : Ms. Gina - 09198169234 / 09999916008
*Tent rentals are also available at the ranger station via Ambangeg Trail

Ms. Mereng Albas - Protected Area Superintendent (PASU)
You need to contact her in prior to your climb and provide her the dates, number of heads and your name. Currently, they are allocating the camping areas to avoid overcrowding . Via the Ambangeg trail, there are two possible campsites - Camp 2 and 3.  Both are good locations to camp.
Contact Number : 0919-6315402

Mt. Pulag Guide &Porter Rates :
Mt. Pulag has their own association of guides and porters and you can get an accredited guide at the Badabak Ranger Station.  A receipt will be issued after paying the guide fee.
Via Ambangeg Trail : 500/weekend for 5 people and 100 pesos/head in excess of which. Max is 10  people for 1 guide.
*Porters are also available at  P300/day. (Please be considerate of the load you allocate to porters). You also need to provide the porter bag.
Note : You need to provide them food. As for their water and lodging, they already have their own provisions.

Registration Fee : 200 Pesos/Head inclusive of camping fee, DENR fee and entrance fee - this is paid at the Ambangeg  or Akiki Visitor's Center. No exit fee needs to be paid when doing a traverse.

Shout out to my guide Soriano who did an amazing job! He made sure I was okay the entire time and provided accurate estimates on how we're progressing during the climb. You see, some guides will tell you that you're only 15 minutes away from the next stop when it's actually 3 hours. :P  Thanks also to Vince Gapuz who recommended him to me. Vince was our guide when he hiked from Kabayan to Mt. Timbac last year. (Post here.)

To Mors and Tan - congratulations on your new life! Thank you for inviting me on your honeymoon! :)