Posted by Jovial Wanderer on April 05, 2012
May 2010 - Sharon, a marketing officer from my previous company, being innately charming and sociable, was invited to the launch of Lonely Planet Philippines Magazine (plus our company was one of their sponsors so we had to be invited, hihi :P) .
Though we were attending on official business, which meant extra "working hours", I didn't mind. It's Lonely Planet! 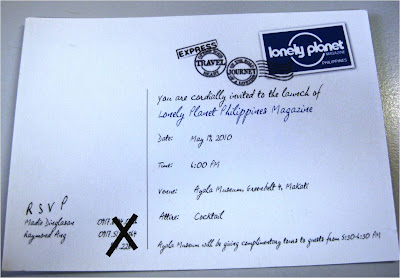 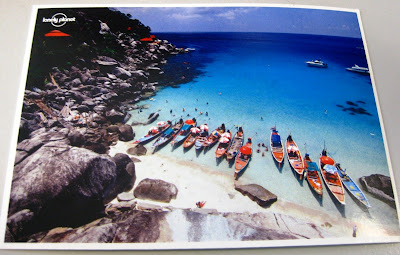 On our way to Ayala Museum, Sharon informed me that we were also meeting Dominic Hormigos, the blogger behind Eskapo 3.0  and popularly known around the blogging community as Dong Ho.
I had been actively surfing travel blogs since 2006 so I was familiar with the tenured bloggers. I exclaimed excitedly, as though I've been harboring an intense obsession despite not knowing what he looked like. I mean, don't you sometimes feel that way about other bloggers? You regularly visit their website, read about their adventures and along the course of your "healthy stalking", you develop a form admiration and a sense of imaginary friendship (chos!), so when you finally get the chance to meet them, you feel as though you're meeting a celebrity.
Dong Ho, is one of the most respected travel bloggers around. He is admired for his passion for travel, journeys to off the beaten paths, great photos and ability to influence others to explore.
We were already a couple of minutes late when we arrived at the registration area. Sharon received a text from Dong Ho and we met with him near the museum entrance. He gave out the vibe of a kind soul, a gentleman, though he seemed like a very private person. In less than a minute, his physical attributes registered in my head - he's cute, with a complexion that reminds me of dark chocolates minus the bitterness, sort of a cross between a Marlboro guy and Prince charming.
It was all small talk at first, then the conversation predictably shifted to traveling. His eyes ignited and like an Energizer bunny, his mouth spitted stories of amazing places he had visited. His enthusiasm rubbed off on me and it turned into a very animated conversation. I was thrilled to be able to talk to someone who seems to be just as obsessive as I was. But I was getting ahead of myself since I didn't really know much about him except from what I've read from his blog.
Dominic and I worked with several projects after that and what started as heavenly attraction turned into brotherly affection over the succeeding months that followed. Haha! Some people come into our lives like a brother from another mother and I feel blessed to have an such an optimistic and inspiring person like him for a friend.
For more of his travel stories and striking landscape photos, please visit his blog - Eskapo 3.0  or his Facebook Page.

Tribute Thursdays is a series of posts I started this 2012 where I feature fellow blogger friends. I write it on "whenever I feel like it" intervals :P
Themed Posts