The Guys from Our Second Tarak Climb 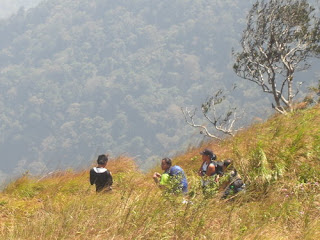 Yesterday was our second attempt in climbing Tarak Ridge with my fave climbing buddies and I am now back in the city all sore and scraped but as with any climbs, it was all worth it because I was able to spend time with old friends and witness beautiful mountain sceneries. Then there was our guest mountaineer – Rhovee, my friend from our outdoor club at work who provided a lot of entertainment during the climb.

We were able to follow our itinerary, which was necessary because it was just a day hike and we were told that the last bus to Manila from Mariveles departs at 6:00pm. Since everybody arrived on time, we were able to leave Manila at exactly 4:00am. Hooray to ECOF, my backpacking group, wherein one of our core values is punctuality.
There were seven of us on this trip. Two guys and five gals - all good friends of mine but what made this trip  more entertaining were all the guys we encountered during this trip. Hahaha! I can’t believe it. I don’t know if this is a sign from God but since the beginning of the year, I’ve been meeting a lot of guys and you know what, if you just open your eyes, you’ll see that there are tons of great, single guys out there. I never even noticed them that much, but then again, I’m not really into having boyfriends or flings or any romantic stuff. It’s just not my thing. I’m just inclined to appreciate beauty in hot, sweaty, sporty, smart guys, like I do when I see an artwork in a museum or if I see a nice bag in a mall. I’m contented having the people in my life who I love and love me back. Should I meet someone who I will get to spend forever with, that would be just a wonderful bonus, but right now, I’m happy. The Lord has blessed my life.
Oh where do I start my litany of the cute guys we saw? Hehehe..well, let’s start as we began our descent from Mt. Tarak.
The 13 Spartans
Me and Jules were both tired and looking haggard because the climb was taking its toll on our aging knees. We were sweating profusely and we had stopped our merry chatter because of our agony. We were nearing the Papaya river, approximately two hours after we left the ridge when we encountered 13 cute guys in competitive gears. They had these nice bags, nice shorts and nice bodies – well that was according to Jules. I can’t even recall any of their faces because when we met them, they were walking in a single line and as we passed each one, they gave us polite, warm smiles and a jolly ”good afternoon”. It happened so quickly, like a hallucination that the concrete features of their faces didn’t even register to me. I just remember feeling happy at that time because they were so friendly, open and have I mentioned cute? Those guys served as our oasis in the midst of suffering. They were like Love in the Time of Cholera, a Gatorade replacing lost electrolytes in the body, the chocolate in the middle of a Ferrero, the star in a Christmas tree and what other metaphor you can equate to something that helps alleviate pain and causes joy.
Oh I almost forgot to tell you, the 13th guy who walked behind the rest of everyone held out his hand to help me get down from a steeper part of the trail. Normally, if I am able, I would refuse any help, but this particular guy generously offered his hand and I just didn’t have the heart to down his assistance. His hand felt warm and the moment felt like it lasted an hour. I smiled at him, he smiled back and then he left. Jules saw the whole thing and congratulated me for not turning down his help. Jules told me I had improved my flirting skills because apparently, in our years of climbing together, I would often brush off male help. Honestly, it’s not a pride thing. I do seek help if I need it. It’s just that, if I can do something myself, why ask for help? Then I started growing up and other friends would advise me not to be overly independent, that I shouldn’t make other guys feel inadequate, that sometimes, I need to ask for help, that guys like to feel needed. Well, it works for most women and that can be a cute thing, but I enjoy being me. If those guys can’t deal with it, f&*k them. On the other hand though, I never had a romance, so for curiosity’s sake, maybe it’s about time I try my friend’s advices. Yeah, pretend to be a little vulnerable, then go for the kill. Hahaha!
Men in Uniform
As if the 13 spartans we encountered in the mountains weren’t enough, we also had two the men in uniform for dessert (figuratively of course!). I’ve always had a thing for the men in military or SWAT uniforms. They look so brave and strong. You know, if I will be having a boyfriend, I want someone much more courageous than I am.
This wonderful encounter happened on our way home. We were in the bus, I had fallen asleep and when I woke up, we were already in Pampanga. The bus had a stopover and waited for a few more passengers. I turned to my left and caught a glimpse of a toned man in a fatigue. They weren’t in the army I think, more like police on training wearing green fatigues. I sucked in some air..hay..hotness. The two guys sat in the back part of the bus – between me and Rhovee since we both sat at each side with the window seats.
Of course, I didn’t had the guts to talk to either of the two. I noticed Char and Rhovee. Both were wide awake and alert. The wolves had smelled their preys. Me, Char and Rhovee, just made eye contact with each other,our non-verbal mode of communicating to each other about the guys. Then the guys went down before we did, when the bus reached Quezon City and when they left, we giggled to our heart's delight. Imagine holding that off from Pampanga to EDSA?!

I will most likely go back here and camp in the Papaya river. The river is quite small and you can’t do any swimming, just dipping, but it’s so charming and clean, you can’t just go there and take pictures. You need to feel the water.
Itinerary Here
Kikay Tales Mountaineering Mt. Tarak