Posted by Jovial Wanderer on March 22, 2009
I was excited and nervous when I agreed to join Jay-Z and Milmar on their Mt. Arayat day hike traverse using a trail which I haven't seen before. Both guys are friends from our office outdoor group and are currently addicted to climbing. They’re planning to scale whatever mountain they can climb this year, such as Mt. Guiting-Guiting, Mt. Ugo and a whole lot more. As for myself - I’m more into light trekking and backpacking these days but I still do outrageous climbs from time to time to satisfy my insatiable desire for adventure. I felt extremely nervous because I'm not as physically as strong as those two. I slipped on a bridge two weeks ago while trekking at the Kinabalu National Park and almost broke my back. It still hurts a bit and I'm scared to strain it some more, but this is another chance to go on an unforgettable adventure and there's no way I'm backing out from this because of a little pain.

I was also curious to see what the other trail can offer as I've read in lots of blogs that the views there are breathtaking. I've been there last year but climbed it from the other side - the notorious Mt. Arayat National park trail. I was amazed by the view which was about an hour from the jump-off. Its forest has a fascinating foliage where you can see different plants and flowers. It also has some interesting rock formations. There's also an amazing view deck where you have to do some bouldering and see Central Luzon from a great height.

The original plan was to go up using the Magalang trail and descend via the Arayat National Park. We started climbing at 3:46 AM with a guide and two other locals from Brgy. Magalang. It was a very cold Sunday morning. During the trek, I felt dizzy because none of us got much sleep. We left via Victory Liner Caloocan at 11:30PM and on the bus, we chatted with each other for around 45 minutes and slept the remaining hour. When we arrived in the place of our guide – Tatay Rey, we again chatted with him and his wife and abandoned the idea of napping before the trek. 99.9% of the trail was uphill and lasted for a little less than four hours. I tried as hard as I could to push myself to go on. Though it was cold, I was sweating like a pig.

At about 7:30AM, we finally reached the North peak of Mt. Arayat. Two white dogs greeted us enthusiastically, pouncing on each one of us. These were the pets of the armed guards stationed in the tower in the north peak. A fog hovered the entire peak obscuring the view which we came to see. Nevertheless, we made the most out of it by resting on a bench, talking and laughing about the two weird dogs who gnawed on wood and rocks. 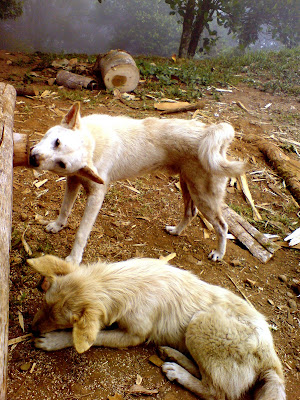 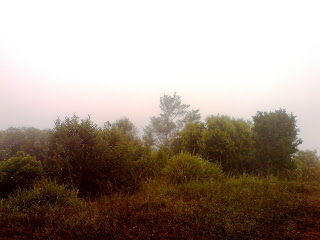 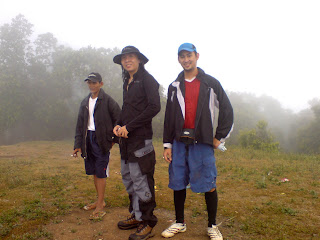 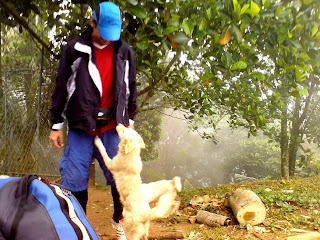 The start of the exploration climb
After about 45 minutes, we resumed our trek and headed over to the South peak where I went to last year but when we got there, I realized they led us to a different peak. I guess the actual south peak was a few meters away but they didn’t know where it was. 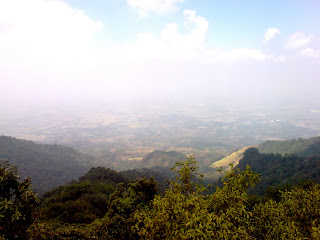 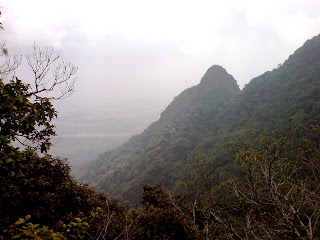 I didn’t complain because the view here was amazing as well. After eating brunch and taking pictures and talking about Jay-Z and Milmar’s insights on love, we resumed our trek for the other trail - the Arayat National Park trail. Well, originally that’s where we intended to go but Tatay Rey and company decided to lead us to another trail  which we coined as the ReyNardo’s trail (after their names). They made us go deep into the woods with no established trails. It was obvious that no one goes there regularly and we suspected they didn’t know where the original trail was. We also had to go up a ravine where we had to use rope and cling to the roots of the trees for our dear lives. We were all getting cuts from all the plants we had to brush aside so we can get through. Most of the plants we encountered had thorns on it. No one complained because we were all enjoying it and we were actually getting along with Tatay Rey and his pals. It was a different level of mountain climbing – exciting though a bit agonizing.

At around 5:00pm, our ordeal in the woods finally ended and we got down in another barangay – different from the barangay we had intended to exit. It was better though because this barangay was nearer to the town proper. We had some snacks at a nearby sari-sari store and we took a bath at a resort. We capped off our climb with dinner in our official – “after day hike” food craving, Jollibee! We talked a lot about what we went through - how hard it was and how we enjoyed it a lot.