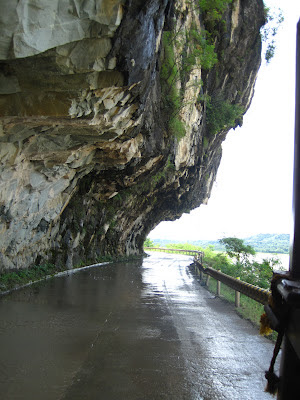 On the way to Tinglayan, a municipality in Kalinga, the public jeep stopped at a barangay to unload some supplies. At this point, we were less than 20 minutes from the town proper where I would be staying for my much clamored solo R&R and I was left with two other female passengers. I noticed both of them were feeling impatient from the stop-over and started conversing with the driver.

After a few minutes, one of them spoke to me.

And all three turned to me expecting a response.

Still tired from the 12 hour bus ride from Manila and the 2.5 hour jeepney ride, my mind was shuffling in between reality and neverland. I stared back with a blank look on my face, unable to decipher what was said.

One of the quick-thinking passengers, a slender teen translated in Filipino. "May bagahe ka ba?" (Do you have any big luggages?). I shook my head and told them I only had a backpack.

My eyes followed the two women as they flagged down a dump truck that had just brought down some gravel to a home, a couple of blocks away from our parked jeep. I watched them expertly climb up the big truck.

It's been a while since I last rode one of these things and it felt like it was my first time again.

Being petite and not exactly flexible, I held my breathe as I raised my right leg and planted it on a dangling metal near one of the front tires of the truck. I stretched my arms as far as I can to grasp a metal railing at the top of the truck as I pushed the rest of my voluptuous self up.

I swung my other foot inside the truck’s dusty floor. I felt my inner thighs straining from the sudden movement.

I made it in! After ensuring that everyone had made it at the back of the truck, the driver ignited the engine and we continued our journey around the mountains. The road was a combination of paved and rocky patches with views of Chico River and lush green mountains towering on the left side. As the truck slinked around the mountains, my butt shuffled back and forth, brushing against dirt but the rewarding views of the mountain sides and the gushing river made every clinging grime bearable. 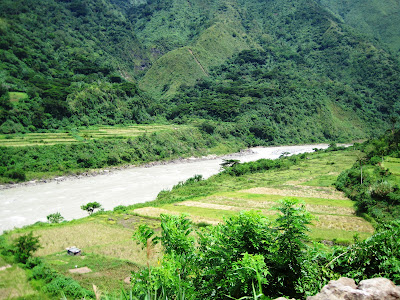 Want to check out the amazing views? Check out this video I took while rolling on my butt at the back of a dump truck! :p

The truck stopped at a nearby construction site. My co-passengers started talking to each other again. I found out that we were still a couple of minutes away from the town proper. One woman was carrying a huge sack so it was going to be a tough hike. Fortunately, another truck passed by, this time, carrying more people. In fact, it was almost full. But such is the generosity of the people on this side of the country that they tried to make room for us.

Unlike our previous ride, this truck had no enclosures, no walls where you can lean on your back. We had to cling to ropes, bars or whatever we could get our hands to prevent us from bouncing off. In fact, there was barely enough space to firmly plant my feet. After several breath taking minutes, the truck reached the town proper. One of the ladies went down and showed me Sleeping Beauty Inn, my home for the night.

And the next few two days deserves its own story.  :)

Want to visit Tinglayan? Go to this link for a travel guide to Tinglayan.